The Good News in Wisconsin That the Media Isn’t Covering 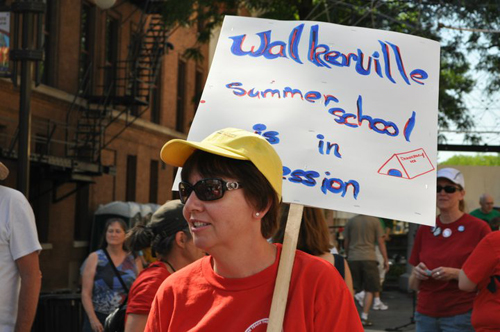 This week in Madison, Wis., has seen the largest protests since a "budget repair bill" virtually outlawing collective bargaining proposed by Gov. Scott Walker inspired an occupation of the state capitol building and massive street protests this past winter.

Now, thousands are protesting Governor’s Walker drastic cuts to the social safety net and workers’ rights, contained in his 2011-2013 budgets. The budget would cut education funding by $824 million and Medicaid by $466 million. Walker is making these cuts despite giving away nearly $320 million in tax cuts to big corporations.

The Republican governor has also proposed allowing local governments to privatize their highway departments and hire private contractors to maintain state roads in Wisconsin. This upset many highway workers who would be stripped of their union representation if highway work was privatized in Wisconsin. Many claim not having union representation would make highways dramatically more dangerous as it would be more difficult to speak up about safety problems if highway workers did not have union protection.

Of course, a Wisconsin Court has ruled that that bill’s passage was illegal since it violated the Open Meetings Law. It nullified the bill. There are even rumors that Republicans might try to pass a new, less legally dubious version of the ban of public employee collectively bargain as part of the 2011-2013 budgets, since Republicans expect to lose control of the State Senate in a series of six state senate recall elections to be held this July.

Activists, who have been locked out of the capitol by Governor Walker’s administration despite numerous court orders telling the administration to re-open the building, have responded by setting up “Walkerville," a tent city overlooking Capitol Square. More than 300 people have been sleeping there all week, in protest of Walker’s attempt to pass the bill.

On Monday, there was a large march against the budget by more than 1,000 people led by former Senator Russ Feingold. While there has been a lot of coverage of the recent protests in Wisconsin in local media and national progressive outlets, what hasn’t been talked about much is what the protests now entering their 116th day—if you start counting from the initial response to Walker's "budget repair" bill back in February—have done to deepen the militancy of the people involved.

As the struggle in Wisconsin wears on, workers have become engaged not just in acts of protest, but in acts of civil disobedience. On Monday, 25 people were either arrested or cited including two journalists from the media outlet The UpTake, who were covering the protesters breaking into the Capitol.

Activists have also gotten more creative in how they have targeted expanding direct, militant action to other targets of corporate power. After the protesters were pushed out of the Capitol, they went to the local M & I Bank branch, a major financial backer of Governor Walker’s campaign where by protesting it they forced the bank to close for the day. Activists have begun to draw up lists of banks that pay no taxes and look for ways to resist the attempts of those banks to foreclose on homes in their neighbors.

The attack on workers’ rights in Wisconsin has proven to be a training ground for activists in a lot of ways that are going to pay long-term benefits for activism in the state. Unions stripped of their ability to automatically deduct dues from workers’ pay checks have started training activists and shop stewards to collect dues individually from workers each month. Collecting dues individually from workers is a process that involves hundreds, thousands of activists.

“I think what my union AFSCME has done is really cool. We have had a huge discussion of the old-school style of unionism with our rank-and-file members that we haven’t had in the past,” says Edward A. Sadlowski a staff representative for AFSCME in Wisconsin. He continues:

Due to the law, we simply can’t return to the model of having a staff representative do everything for workers and expect to survive as a union.  Now we have to actually to train people about how are unions. We actually have to involve people in their unions and make them feel like they run the unions, not their staff representatives.  This is going to have amazing results for the labor movement over the long run.

While the mainstream media has focused heavily on the change that could come from the upcoming recall elections in Wisconsin, the real long-term change is likely to come from the galvanization and training that the attack on workers’ rights has provided for activists in Wisconsin. Activists have been gaining a confidence and creativity in their ability to take on entrenched corporate power while at the same time union members have become more involved in running their unions. This promises to have a generational long-term effect much greater than any recall election for a four-year state senate term.