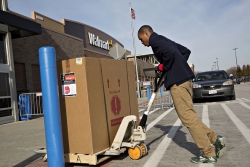 Activists rally outside the U.S. Supreme Court on March 29, 2011. The court is reviewing a lawsuit alleging that Walmart discriminates against female employees.   (Alex Wong/Getty Images)

In recent years, Walmart has done much to mitigate its image as a big box super villain, even as it faces complaints from one of the largest gender discrimination lawsuits in history and countless other allegations of exploitative labor practices.

Part of Walmart’s public image makeover has been to cast itself as a politically moderate company that donates as much to Democrats as to Republicans.

After it was revealed that in 2008 Walmart officials held meetings telling managers that voting for Barack Obama would mean “inviting unions in,” the company apparently launched a media initiative to show it was donating as much or more to Democrats in the 2010 elections. The move to cast itself as supportive of Democrats appears to be part of the company’s push to open more stores in urban and higher-income areas with more progressive and more highly educated residents.

But a new report by the group Walmart Watch analyzed the company’s political giving and found that in the 2010 elections, the company and the founding Walton family still disproportionately supported right-wing candidates and Democrats with more right-wing positions.

A press release for the report, "What’s Right: Walmart’s Words vs. Walmart’s Political Priorities," says it

shows how the company and Walton family have wielded their resources to undermine the interests of Walmart’s core customers and associates, and at times, even the legislation Walmart supposedly supports.

The report notes that Walmart has lobbied against bills that would mandate greater disclosure of political contributions, perhaps to try to control its image.

The report also catalogues how Walmart has increased its political influence through lobbying exponentially in recent years, spending between $6 million and $7.4 million between 2006 and 2008. The report says:

Company founder Sam Walton didn’t think Walmart should be involved in politics, which kept the company out of Washington for a long time. Walmart hired its first lobbyist in 1999, and its lobbying activities have increased dramatically since then.

A majority of Walmart customers and employees are middle-income or low-income, but through its donations and lobbying efforts the company consistently works against the interest of these groups, the report said. For example, Walmart lobbied aggressively to defeat measures for expanded early childhood education and healthcare for the uninsured in California. Labor-related issues have also been in the forefront of Walmart’s lobbying efforts.

Though Walmart claims to maintain transparency in its supply chain labor practices, its contribution recipients voted against the public interest on this issue as well. SB 657, which was passed into law in 2010, required large manufacturers and retailers to disclose their efforts to eliminate human trafficking and slave labor from their supply chains.

Similar to its role in the national healthcare debate, Walmart maintained one position in its dealings with the public but gave money to candidates who consistently opposed the measure: 28 Walmart contribution recipients voted against SB 657, two were present and not voting, and one voted in favor of it.