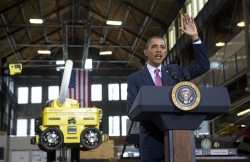 Promising a “renaissance of American manufacturing,” President Obama yesterday announced in Pittsburgh an "Advanced Manufacturing Partnership" (AMP) of universities, businesses and the federal government to support development of innovative ideas for both products and processes to strengthen domestic manufacturing.

Working largely through existing channels, like the National Science Foundation, AMP would start with a budget of $500 million—redirected from existing appropriations and drawing on new funds, pending congressional approval—to invest in early stage research and development.

Obama used the occasion of his trip to Carnegie-Mellon University and a local firm building tiny robots that inspect water and sewer pipes to emphasize the importance of manufacturing to the American economy and the creation of good jobs. And he stressed the importance of innovation to making manufacturing in this country globally competitive.

The president and his advisors—as laid out in a new report from the President’s Council of Advisors on Science and Technology—took pains to distinguish their “innovation policy” from an “industrial policy.” AMP will try to create an “ecosystem” of innovation in the United States and foster “critical enabling tools” for manufacturing businesses, according to a briefing by Obama’s assistant for manufacturing policy, Ron Bloom, and PCAST co-chair Eric Lander. “We are not endorsing industrial policy,” Lander says.

Indeed, AMP will fund the kind of federally supported research that in the past led to development of the Internet (and search engines like Google), cell phones, GPS devices, a large proportion of new pharmaceuticals and much more. As in the past, much of the focus will be on military needs, like the challenge to a small company, Local Motors, to design a new combat support vehicle in a month and build it in three months. (It succeeded in part with “cloud” designing, putting the Pentagon request on the Internet and drawing in 162 design proposals.)  Non-military business may benefit from some spin-offs.

But AMP will focus on manufacturing whether or not it is for the military and on processes as much as products.

For example, one early initiative will be the Materials Genome Project, which will attempt to provide a template for designing new materials with specific characteristics—like a strength to weight ratio—from the molecular level on up to industrial scale.

Or to take a current success, the federal Los Alamos Laboratory developed software to simulate behavior of nuclear particles that Procter & Gamble used to develop new techniques of manufacturing diapers far more efficiently. Now P&G is sharing its software for free with small manufacturers as a result of work through a manufacturing consortium the administration established. The company hopes many of its small suppliers—and small firms make a large share of manufacturing output—will cut production costs with use of software they might not otherwise be able to buy.

Bloom says AMP will fund nano-, bio- and information technologies that may have widespread applications, including rejuvenation of “basic industries,” like steel, that can qualify as advanced manufacturing as much as some new digital electronic device if it incorporates innovative technology.

Despite the efforts to avoid the “industrial policy” label, Republicans are likely to dismiss AMP as unneeded interference in the market with the government trying to pick winners and losers—never a fair and complete description of industrial policies in any case. And Republican presidential primary front-runner Mitt Romney is even denigrating Obama’s attempts to boost manufacturing.

Politically, Obama’s manufacturing strategy—including nurturing green industries—is likely to be popular, especially in many key Midwestern states.  Manufacturing, benefiting from a weaker dollar, has been a relatively strong force in a weak recovery. That follows a “lost decade” under Bush for manufacturing: from 2000-2010 industrial production actually declined in the United States—a record worse than the 1930s—and 5 million manufacturing jobs were lost.

But precisely because it boosts productivity so much, advanced manufacturing will not replace all those lost jobs, even though it permits the economic growth—if incomes are widely shared—to stimulate other job creation. AMP itself is also a relatively modest, if important, investment.

The Obama administration also designed AMP with a critical flaw: it has no representatives from the labor movement, which has been one of the strongest supporters of rebuilding American manufacturing and can play a critical role in developing the skilled workforce the country needs as well as giving workers the voice they need for successful high-road work places.

And even more critically, the administration makes a big mistake in dismissing and distancing itself from industrial policy, which virtually all advanced and newly industrializing countries have in one form or another. (Ours has always been camouflaged and distorted as a national security policy.)

Indeed, even though he does not give it the name, Obama’s investment in high-speed rail, efficiency and clean energy, infrastructure improvements, tolerance for a weakening dollar, and support for community colleges and other education initiatives are all part of a patched-together industrial policy. It needs more coherence and certainly more assertive global components, from pressure on China on currency valuation to means of assuring the results of “innovation policy” do not drain away to the foreign factories of U.S. multinationals.