Congresswoman and Eva Longoria Partner to Help Children in the Fields 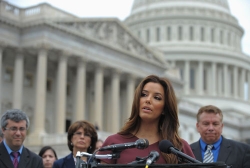 Eva Longoria speaks June 16 at a press conference at the Capitol in Washington, D.C.   (Photo by Mandel Ngan/AFP/Getty Images)

Actress Eva Longoria and Congresswoman Lucille Roybal-Allard (D-Calif.) announced a new effort to change child labor laws for farm workers at a press conference June 16 at the Capitol in Washington, D.C. While the lawmaker is using legislation to improve the lives of migrant child workers, the actress is also using a powerful tool: media.

Longoria recently produced The Harvest/La Cosecha, a film about three adolescent migrant workers and their families who follow the crops they harvest. It's scheduled to be released in July. Roybal-Allard plans to re-introduce HR 3564, The Children’s Act for Responsible Employment, better known as the CARE act, to close loopholes. The bill was first introduced in 2007. It now has 107 co-sponsors.

“Agriculture is the only industry governed by labor laws that allow children as young as 12 to work with virtually no restrictions on the number of hours they spend in the fields outside of the school day,” Lucille Roybal-Allard said.

Under current law, employers can hire children as young as 12 to work the fields for as long as 10 to 12 hours in often extreme heat.

Restrictions on how much children can work outside of school does not apply. The newer bill will level the playing field, Roybal-Allard said, so that children working on farms “would have the same rights and protections as all other children who work in this country,” she told The American Prospect.

Norma Flores López director of Children in the Fields campaign, which is part of the Association of Farm Worker Opportunities Program, was a child farm worker herself.

“Starting at the young age of 12, I worked in the fields alongside my family. I worked to help my family survive, often until my hands were so swollen that I could not hold a pencil at school.“ She was interviewed last Friday on Radio Bilingue.

The E-Waste Restriction Bill aims to help ensure electronic waste such as computers and other electronic products is not exported out of the country. It is believed to be the first law of its kind.

The ordinance requires collectors of e-waste to bring it to a recycler, who must be certified by a program e-Stewards. The program seeks to prevent e-waste from being shipped to poor countries where, because of unregulated recycling practices, children expose themselves to toxic products such as lead and mercury as they break apart the products.

Sup. Liz Kniss told the San Jose Mercury News: "Years ago, I saw an awful video of kids in China or India who were attempting to get the valuables out of these electronics by burning them," she said. "Of course it's extremely toxic."

Although states and cities do not have the right to ban exports—that’s federal legislation—the Santa Clara County ordinance is a first step.

Legislation is rolling in other cities as well and on Capitol Hill, where Mike Thompson (D-Napa) and Gene Green (D-Texas) introduced HR2284, The Responsible Electronic Recycling Act.

The bill would ban U.S. companies from sending old e-waste to developing nations where they are broken apart or burned by workers with little or no safety protections.

The bill would also create a new category of restricted e-waste that could not be exported to developing countries.

Stated Rep. Thompson, “Each year, millions of tons of electronics equipment are discarded in the U.S. and shipped to developing nations for unsafe salvage and recovery. By carefully regulating the export of e-waste, this bipartisan legislation takes concrete steps to address a growing environmental and health crisis while creating good-paying recycling jobs here in the U.S.”