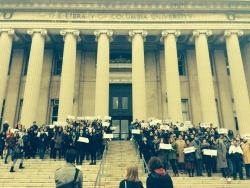 Gathering with fellow unionists in Washington, D.C., Jose Hugo Yanini speaks firmly about labor rights in Colombia. But a few weeks ago, the industrial janitor and shop steward feared that he soon might never utter another word.

Yanini, who is campaigning with SEIU and other groups against the pending U.S.-Colombia trade agreement, is a typical target in his home country. Last month, on his way home from collective bargaining talks, labor activists report, he got the anonymous phone message that every Colombian union activist dreads: "Tell that man that he should be careful with his tongue or we will cut it out."

So far, the case hasn't been fully investigated and the public doesn't know who was behind the menacing call. But people do know Yanini's boss: the multinational company Sodexo, a major provider of food and custodial services in the U.S. and other countries, and a notorious union-buster at home and abroad.

What brought Yanini and other Colombian unionists to Washington is a simple demand that the U.S. simply not continue to do business with a country where speaking out for labor rights can be a death sentence.

The Colombia Free Trade Agreement has been pending for years in Congress along with other trade deals, stalled by political stalemate as well as intense opposition by unions and human rights advocates. It would strip away tariffs and, like the North American Free Trade Agreement, subject both countries to a series of byzantine bilateral trade rules ostensibly designed to maximize profit. In reality, as with NAFTA, the deal is designed to maximize exploitation and minimize corporate and government accountability.

Earlier this year, the Obama administration touted the Labor Action Plan, a joint agreement to enhance labor laws and regulatory mechanisms. Though the plan contains provisions that look good on paper—such as legal reforms to bar certain labor abuses and anti-union activities—advocates fear that it's just window dressing for a deal designed to enrich the companies that keep workers impoverished and silenced.

According to U.S. Labor Education in the Americas Project (US LEAP), the LAP does meet some of the demands of labor unions by promising stonger enforcement of labor law and preventing employers from undermining organized labor by exploiting contract and cooperative systems. But in an April statement, the group concluded:

(1) does not require an actual reduction in violence against trade unionists or advances on impunity, (2) is limited only to labor issues and does not address a wide range of other concerns, including human rights violations, militarization, impact on agriculture, internal displacement and the rights of Afro-Colombians, and (3) provides no way to ensure compliance once the Colombia FTA is implemented. Consequently, prominent labor and human rights groups have joined leading Colombian trade union organizations in denouncing the agreement as woefully inadequate as a sufficient condition for approval of the FTA.

Colombian activists came to D.C. to give a ground-level perspective of the gap between the LAP's official language and the reality that workers face everyday.

Carlos Olaya, director of research with the union SINALTRAINAL, is skeptical that the labor accord would alleviate obstacles to effective labor organizing.

Even organized workers have “no real access to collective bargaining rights,” he said, recalling that in his union, negotiations with various companies fell apart and left workers "stuck in limbo." The fundamental limitation of the LAP, he said, is that:

it's not changing the business culture, which is one of indirect contracting and not hiring workers in a way that allows them to access their rights. And there's an ongoing anti-union culture.... it does not address those kinds of root problems, and so workers are continuing to lack access to their labor and human rights.

Beyond labor issues, Colombia suffers from a whole range of crises: a monstrous drug war, ongoing factional conflicts, and deep marginalization of Afro-Colombian and indigenous communities. All of these problems are interlocked in a climate of impunity and corruption, which is symbolized by Colombia's distinction as labor murder capital of the world.

In 2010 alone, according to US LEAP, 51 trade unionists were murdered—a considerable increase since 2007, when the Colombian Congress initially approved the pact. Between 2006 and 2010, a staggering 239 trade unionists were killed in Colombia, compared with 265 unionists killed in all other countries combined. The vast majority of cases documented over a quarter century have not resulted in convictions. In light of the vast inequities plaguing the Western hemisphere, perhaps it's not so ironic that the country's chaos and oppression has paralleled relatively solid economic growth and plenty of aid from the U.S.

The standard Washington prescription for this social malaise would be more unfettered foreign trade in the name of economic uplift and social stability. But Yanini, whose outspokenness may have nearly cost him a body part, has a different take.

"I work at Sodexo. Sodexo is a very large multinational company that has very high earnings every year. And yet we as workers there have not benefited from anything because they have not wanted to give us any benefits,” he said, adding that the company refused to accommodate health problems, including tendonitis, that limited his ability to work. “They fired seven of my colleagues that wanted to join our union,” he recalled, “just because they wanted to join a union.”

Repudiating the all-boats-rise rhetoric, he said, “that's a good example of how even large companies that have lots of money are not sharing that wealth with us as workers.”

Though the Labor Action Plan seems to reflect essential labor rights principles, it's embedded in a trade liberalization regime that undermines human rights and democracy. So the activists who oppose the Colombia FTA won't be satisfied with labor provisions that focus only on the workplace, without addressing other potential consequences for civil society, for agriculture communities and marginalized groups. By design, that kind of U.S.-Colombia trade "partnership" would simply reward injustice with foreign investment.

“The key issue here,” Olaya said, “is that there's a large imbalance in that relationship between the US and Colombia. In many ways, both with the FTA and otherwise, the U.S. has a lot of power to impose itself in Colombia.”

For the unionists struggling for survival, an imbalanced trade deal would further compound the power imbalance in Colombia's labor system, where the price a worker pays for raising his voice is meted out in blood.