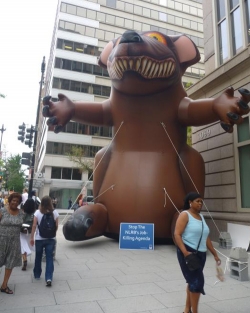 A milestone for sidewalk theatrics?

WASHINGTON, D.C.—Typically, unions park inflatable rats outside of the offices of employers they accuse of unfair labor practices. In what might be a first in American labor history, however, yesterday the pro-business group Americans for Job Security parked an inflatable rat outside of a two-day National Labor Relations Board hearing on a newly proposed rule to limit appeals occurring before workplace union elections.

The giant inflatable rat propped up a sign reading “Stop the NLRB's Job-Killing Agenda.” The scene brought to mind business groups' (and the GOP's) frenzied attacks on the independent federal agency in the wake of its complaint againt Boeing Corp. for retaliating against workers for striking.

Why the sidewalk theatrics? Instead of allowing companies to challenge who is eligible to vote in a union representation election before it occurs, the rule would delay most voter eligibility appeals until after the election. This could potentially shorten the timeframe between when workers file a petition and when the election was held.  According to the NLRB, the median union election occurs within 39 days of a petition be filed. University of California researchers found that when an employer filed an appeal and a pre-election hearing was held, the average delay in the election was 124 days.

If the proposed rule goes into effect, it would likely have a marginal effect since much anti-union activity occurs before an election petition is filed. Forthcoming research by Kate Bronfenbrenner of Cornell University and Dorian Warren of Columbia University finds that “31% of serious violations against workers by employers occurred 30 days before the petition was filed and 47% percent of all serious allegations against employees occurred before the petition was filed.”

Nonethless, the open comment meeting yesterday was an unusually high-profile event—the NLRB has been under attack from the right since filing the Boeing complaint earlier this year. FOX News’ cameras were on site for two days straight filming the hearings. (Likewise, FOX News was the only cable TV station to send cameras to cover the NLRB hearings about the Boeing complaint in Seattle, according to Machinists union Local 751 Spokesman Bryan Corliss.)

Dozens of representatives of labor unions and management attorneys packed the hearing room in Washington, D.C. Monday and Tuesday, giving testimony in support or opposition to the proposed rule. Management representatives complained that the proposed rule would not give employers the proper amount of time to educate their employers about unions and prepare for a union election.

“Under such a system, employees would be rushed into a decision without enough time to properly digest information and contemplate a decision,” said Jay Krupin, whose law firm Epstein Becker Green represents the trade group National Grocer Association. “The proposed rules would make the election process for employers an away game.”

Proponents counter that under the current system, where employers’ often starting talking anti-union from the day employees are hired, employers have more than enough time to prepare for union elections.

“Contrary to previous witnesses who claim that employers have little or no ability to communicate effectively with employees, employers voicing their opposition to union representation begins from the moment employees begin talking about the union and continues unabated day after day, week after week, leading up to the election,” said Dorian Warren, assistant professor at Columbia University.

While it is unclear what will happen to the proposed rules, many workers who spoke at the hearing said something must be done to change labor law.

In February 2008, a majority of workers at Rescar, a lead plant, in Dubois, Pa., filed an NLRB petition to hold an election to become members of the United Steelworkers (USW). During that time, Rescar filed four appeals to the election eligibility of voters in the bargaining unit. The National Labor Relations Board ultimately found no merit to any of the four issues raised by Rescar during the election eligibility appeal.  But during those two months, the company was able to run an aggressive anti-union campaign, according to Rescar employees and the USW.

"All the delays allowed time for the company to bring in unionbuster consultants who held meetings with the employees, while Rescar supervisors passed out weekly handbills that threaten loss of our 401-K, medical and vacation benefits,” said Faith Clark, a former employee of Rescar who was part of the union drive and testified at the appeals hearings.

When the election was ultimately scheduled, USW organizer Phil Ornot claims that support for the union nosedived by 42 percent. The union lost the election. After the election failed, Clark was terminated in a move the USW interpreted as retaliation for her role in leading a union drive. Unfair labor charges for Clark’s termination were filed with the NLRB and a settlement was ultimately reached out of court.

Clark’s story was similar to those of dozens of workers, labor lawyers and union organizers who testified about a NLRB election process they see as broken.

“Imagine if political parties could change the date of elections and manipulate elections the same way employers can manipulate the NLRB process—it would be crazy,” said David Madland of the Center of American Progress. “It's like Lucie pulling the football away just as workers are about to kick it, with workers left flat on their back when they are ready to join a union.”