This Week in Labor: IKEA Workers Vote to Unionize in Virginia 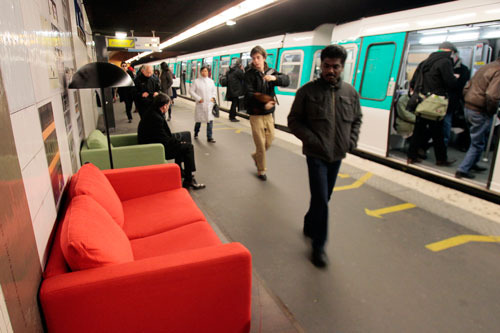 At the end of each week, Working In These Times rounds up labor news we've missed during the past week, with a focus on new and ongoing campaigns and protests. For all our other headlines from this week, go here.

—Workers at the IKEA plant in Danville, Va., voted to unionize by a margin of 221-69 on Wednesday. The International Assn. of Machinists and Aerospace Workers (IAMAW) will represent the workers in negotiations with IKEA subsidary Swedwood. The workers voted to unionize despite an anti-unionization campaign orchestrated by the notorious consulting firm Jackson Lewis.

—Unite-Here Local 1 announced Thursday that workers have filed a complaint with the NLRB over an incident last week in which Hyatt managers in Chicago turned winter heat lamps on to torment workers picketing outdoors while the heat index hovered at 90 degrees. The company later apologized for the thermal onslaught, but the apology wasn't enough to cool heated tempers at Local 1.

—The clothing retailer H&M announced Thursday that it recognizes the United Food and Commercial Workers Union (UFCW) as the sole bargaining agent for more than 240 employees at six New York City-area stores outside of the borough of Manhattan. The voluntary recognition agreement was the product of a 2-month organizing campaign in which H&M did not demand a secret-ballot election.

—D.C.-based advocacy group USAction launched an online petition campaign, Thursday, targeting employers who discriminate against unemployed job applicants. The campaign was spurred by a new report from an employment law group documenting how employers of all sizes explicitly discriminate against unemployed applicants in "help-wanted" ads by stipulating that only employed candidates may apply.

“I feel like I am being shunned by our entire society,” an IT analyst seeking work after more than six months of unemployment told the New York Times.

Earlier this month, Reps. Rosa DeLauro (D-Conn.) and Henry Johnson, Jr. (D-Ga.) introduced the Fair Employment Opportunity Act of 2011, which would outlaw discrimination on the basis of employment status. Rep. Johnson made the case for the bill on CBS's The Early Show on Thursday. “This is un-American, it's unfair and it should not be legal in America to do that,” Johnson told viewers.