What the Honeywell Lockout Taught Me About International Labor Solidarity 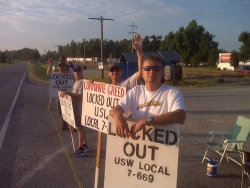 Members of USW Local 7-669 picket after being locked out of their Honeywell plant in Metropolis, Ill.   (Photo via United Steel Workers Local 7-669 )

One year ago, when Honeywell International locked me and 228 of my brothers and sisters from its plant in Metropolis, Ill., I never dreamed that I would end up explaining what happened in Germany and Belgium. But that's where the fight—which officially ended this week, when we accepted a new three-year contract that keeps seniority provisions and creates 21 new jobs—led me.

Many members in locals across the country, including my own, question the importance and relevance of building relationships with labor unions in other parts of the world. Hopefully, my experience during 13 months of being locked out will put these doubts to rest.

On June 28, 2010, Honeywell International—one of the largest corporate political contributors in the United States and a major defense contractor—made the decision to lock out members of United Steelworkers (USW) Local 7-669 from its uranium conversion facility in Metropolis, despite our offer to continue to work and bargain past the expiration of our collective bargaining agreement.

Even before we were locked out, we knew that we could not fight this corporate giant alone.

Our first step was joining the national Honeywell union council, which was not very active. With the help of USW District 9 Director, Daniel Flippo, we held the first ever large-scale council meeting at our union hall in Metropolis, directly across the road from our (former) workplace.

The council was not limited to only USW locals. It had representatives from numerous other trade unions representing workers in other Honeywell facilities. Also invited was Michael Petersen, an IG BCE (the german chemical workers trade union) member employed at a Honeywell friction materials plant just outside of Hamburg, Germany, and chairman of Honeywell’s European Works Council.

If you aren’t familiar with the structure of a German “works council,” you're not alone. I knew nothing about them before my first encounter with Michael. In Europe, by law, major corporations are required to allow employees to have works councils, which actually have quite a bit of influence on how a company does business with its labor force. Each factory or workplace in the corporation with at least 50 employees is allowed a full-time elected works council representative.  Above 50, the number of full-time reps allowed is  directly related to how many are employed at the particular factory, the point being that union or not, these employees are allowed to elect someone to represent their interest with the company by law.

As the lockout in Metropolis continued, and our campaign against this heinous company grew, we started getting requests from just about everywhere to have someone from the local come out and tell our story. One request in particular seemed strange. I picked up a call from one of the guys on USW's staff in Pittsburgh (where the union is headquarted) and was asked, “Hey, what do you think about going to Germany to talk about the lockout?”

My first reaction was complete shock that people half a world away even knew about the lockout and wanted to hear about it from us in person.

After receiving the details and having a quick conversation with my wife, the trip was set. Stephen Lech, a trustee and activist from the local, and myself would leave May 2, 2011 and return home 11 days later. The reaction from the company was immediate.  We would not be allowed on the property they leased for the works council and council members would not be allowed to meet with us. So they did what trade unionist do—they met us on their own time.

In Germany, we met with the German Works Council and told them our story. Now, keep in mind that at these works councils everyone is elected, but not all are union members. After our presentation, council members unanimously passed a resolution calling for an end to the lockout; it was then sent to Honeywell management. At that moment our fight went international. From the handshakes, solidarity, and monetary offers from union brothers and sisters, to the inadvertent meeting of Honeywell management, who would quickly ask us not to tell anyone we met out of fear of being terminated.

We also met with officials from other international unions, including IG BCE, that wanted to build solidarity with not only our local but with the USW International. We were honored to represent USW.

Germany is very interesting because it is highly unionized, has the highest labor cost in all of Europe, yet has the strongest economy. Every single group and person we spoke with were appalled at the companies’ action to lock us out, especially given that we convert raw uranium, and all the safety violations the plant has incurred since the lockout.

We left Germany for Brussels, Belgium, to catch up with Honeywell European Works Council workers attending the European Works Council meeting. Initially there was major resistance from the company to these workers meeting with us even on their own time, but the workers stuck to their beliefs and were able to meet with us in the evening. Once again, we told the story of the lockout and the risk the community was in, and once again, a unanimous resolution was passed and presented to Honeywell.

Even more significant this time was that some of the works council members were managers at their respective facilities and there was a large contingent there that was nonunion. We had to spend a great deal of time explaining what exactly a lockout was because even the concept was foreign to many.

We also met with union officials in Brussels from all the major European labor unions, including European Metalworkers Federation (EMF), the European Mine, Chemical and Energy Workers’ Federation (EMCEF) and the European Federation of Public Service Unions (EPSU). (Unite, the UK union that has formed the first trans-Atlantic global union with the USW called Workers Uniting, was also actively engaged in the European campaign to support the locked out Metropolis Honeywell workers.)

But what was most important in the whole experience was being able to exchange information and ideas with workers from the other Honeywell facilities. Not only were they able to take our story to their shop floor, but we were able to take their stories back with us. The message of basic workers' rights carried across language and geographical lines, and at the end of the day we all have the same goal. To earn a respectable living for respectable work, and to come home the same way we went into work.

With nearly every major corporation now global, the only way for labor to keep up is to go global ourselves. When you take a step back, the fight is the same all over the world: workers' rights are human rights. When we band together  in numbers impossible to ignore, CEOs, political leaders, and corporate bosses have no choice but to recognize us.

They like to forget that we can do our jobs without them at the top, but their jobs and fortunes would be impossible without all of us at the bottom. It’s time for global solidarity forever!

John Paul Smith, one of hundreds of workers Honeywell International locked-out of a facility from June 2010 to July 2011, is a member of United Steelworkers Local 7-669.