Coalition of Immokalee Workers Brings Farmworker Movement to the Streets 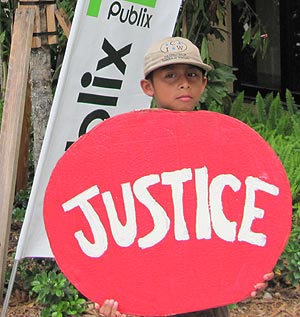 The hot summer has brought in a bumper crop of food activism from coast to coast. For the past few weeks, a group of Florida farm workers has embarked on a marketing coup that challenges the country's food business giants by educating consumers about exploitation in the tomato industry.

The Coalition of Immokalee Workers (CIW) has made a name for itself by using creative consumer-driven campaigns to promote fairer wages and working conditions for tomato harvesters, a workforce fueled by Latino migrant laborers. Though corporate resistance has been formidable, the group has scored a series of victories over the past few years over the likes of Taco Bell, Burger King and Subway. Partnering with consumer groups and fair-food activists, the CIW's Campaign for Fair Food seeks to educate people about the brutal labor that goes into each tomato.

Farmworkers' backbreaking toil will be spotlighted on some of the trendiest sidewalks in Manhattan on Friday, with rallies at Trader Joe's stores in the Village and Chelsea. The actions follow a similar campaign on the West Coast in which protesters in San Francisco and Berkeley wielded paper-bag picket signs and marched through the Mission District calling on drivers to “Honk for Farm Worker Justice.” The CIW now counts a number of religious leaders and gourmet food activist Barry Estabrook among its allies.

The Coalition says its multi-pronged struggle involves “all the elements of our country's food industry,” from the folks hauling baskets all the way up to the florescent-lit supermarket aisle. Most importantly, the organization banks on the political leverage of consumers to push stores and suppliers to abide by ethical standards. With an active membership of several thousand, the workers themselves participate as well through organizing and educating people on “humanizing our farm labor system.”

The workers' key demand, an additional penny per pound of tomatoes picked, seems a tiny cost for consumers and producers to absorb, given the workers' long hours, arduous working conditions and their vulnerability to maltreatment and even slave labor. The pennies do add up for laborers, potentially boosting yearly earnings by several thousand dollars. (Typical wages amount to less than $12,000 annually, according to the Coalition, and after years of virtually stagnant wages, “a worker today must pick more than 2.25 tons of tomatoes to earn minimum wage in a typical 10-hour workday.")

CIW's summer Truth Tour demonstrations, which focus on big-name grocers, have been decried by the right-wing blogosphere as a “Prototypical Example of Alinsky Tactics and Smug Self-Immortalization.” Translation: an effective protest action.

The campaign puts Trader Joe's hip, liberal brand in a bind: the company complained publicly in May that while it was willing to comply with CIW's demands in general, specific provisions of the draft agreement were “overreaching” and “improper.” CIW responded with lengthy point-by-point rebuttals and declared, 'It seems that the longer Trader Joe's resists the Fair Food movement, the more its leadership -- from the CEO to the public relations department -- is determined to tarnish the company's reputation as an ethical, progressive grocer.”

The organizing model evokes interesting historical comparisons with another wave of farm labor activist in the 1960s and 1970s led by United Farm Workers and Cesar Chavez, which pioneered union organizing in agriculture. Yet the UFW has lost political salience over the years, as working conditions have deteriorated.

The younger, nimbler CIW is not a union, but in many ways neither needs nor desires the conventional union structure. The fluid, precarious nature of migrant labor is a barrier to movement building, yet at the same time, the tomato and food industry's severe consolidation across the supply chain provide fertile ground for focused, visible campaigns that mobilize consumers and workers in tandem.

Last fall, Kari Lydersen reported that faced with pressure from consumers and workers, some of Florida's big growers had finally agreed to the penny-per-pound wage subsidy. Soon after, the Coalition clinched a groundbreaking deal with the Florida Tomato Growers Exchange, which bound major growers to a contract that includes “a strict code of conduct, a cooperative complaint resolution system, a participatory health and safety program, and a worker-to-worker education process.” The agreement, estimated to cover more than 90 percent of Florida's tomato industry, helps close a crucial gap in the chain, since retailers and restaurants agreeing to the penny raise could guarantee that the benefit would trickle down to workers.

The enforcement mechanism within the binding agreement is designed to keep growers and suppliers in check, using an outside nonprofit group to monitor compliance, so that, at least in theory, any grower that violates the code won't be able to sell to retailers also bound to the agreement. CIW organizer Lucas Benitez told Naples Daily News that employers have to answer to both their buyers and their workers:

With this agreement, we will be working with growers to identify and eliminate abuses through a cooperative complaint investigation and resolution system, with real consequences for violations, including zero tolerance for forced labor.

In the absence of strong government regulation, the Coalition's strategy aims not just to force employers to obey labor laws but also strive for decent working standards overall, in order to turn Florida's tomato industry from a bastion of poverty into, in Benitez's words, “a model of social accountability for the 21st century.”

Whether such industrial change can be wrought by a motley alliance of some of the country's poorest workers, the biggest food brands, and the savviest customers, has yet to be seen. But if a bunch of migrant farm workers can get Manhattan hipsters to think seriously about who picked their salad this summer, they're on the road to victory.

The description of food industry consolidation was edited for clarity.