A Man, A Plan, A Canal: What Panama’s Massive Expansion Project Means for Labor 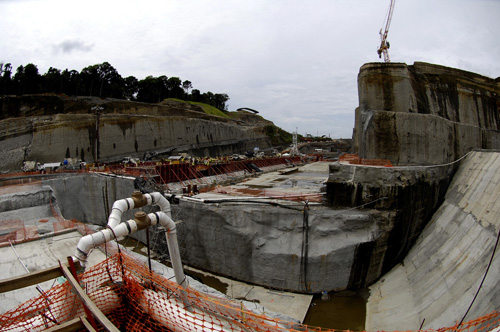 Concrete is poured at the third set of locks being constructed at Gatun Lake as part of the expansion project of the Panama Canal, on July 1, 2011. The expansion project's estimated cost is $5.25 billion.   (Photo AFP/Getty Images)

The Panama Canal celebrated its 97th birthday on August 15 as its massive expansion hums along, as The New York Times reported yesterday. The canal’s expansion, which will allow the volume of goods to increase two- to three-fold thanks to deeper and wider berth, is expected to accelerate shipping to the United States's East and Gulf coasts and to facilitate increased trade in general.

It comes as political support is growing for stalled free-trade agreements—including with Colombia, Korea and Panama—as a way to stimulate the economy. The canal expansion could be a boon to trade with these countries.

The canal’s expansion would likely create U.S. jobs, including union jobs in East Coast ports. The Port of Charleston has invested more than a $1 billion to prepare. But it’s also worth wondering what larger ripple effects the canal expansion will have on jobs and various industries across the globe. Will increasing ease of global trade hurt U.S. producers, as global free trade has in general in recent decades? And will facilitating U.S. exports of grains and other commodities make life more difficult for people in developing countries, as in the NAFTA effect?

The New York Times quotes an Illinois soybean farmer who thinks the canal expansion will help him compete with South American producers. If the expansion of export capacity out of New Orleans—via the Mississippi River—helps large subsidized Midwestern farmers compete with smaller Latin American producers, that could be devastating for smaller or subsistence agricultural economies…or if it undermines industrial agriculture, like soy production in Paraguay, that could perhaps actually be beneficial for small farmers there.

Meanwhile, there are huge questions about the human rights and labor issues involved with the actual expansion of the canal, which has faced massive opposition within Panama, and which the Panamanian vice president privately called a “disaster,” as revealed by Wikileaks.

Panamanians were promised the canal expansion project would create 50,000 jobs. It has greatly stimulated the economy, with ripple effects including the construction of a new concrete plant to make use of vast quantities of excavated rock and sand. But corruption, repression and other systematic factors have created many downsides to the canal expansion. An analysis by the Council on Hemispheric Affairs reports:

Questions over who would truly benefit from the expansion cropped up before the project even began. Much of the expansion’s positive economic effects would end up benefitting the commercial interests of the country’s elite businessmen, bankers and lawyers...

[P]rotests, though resolved by the Spanish Sacyr Vallehermoso firm and Italian corporation Impregilo, went unacknowledged by anyone in the Panamanian government. Such protests over poor labor conditions, as well as unpaid hours, reflect the difficulty Panama’s administration has had, and will likely continue to have, in dealing with labor disputes in which such problems are related to actions by both government labor authorities and foreign corporations.

In a blog for the AFL-CIO, University of Maryland labor historian Julie Greene describes how the Panama Canal’s construction completed in 1914 was widely lauded for the jobs it created.

Working people across the United States took a special interest in the project. They watched it, debated it and pushed the federal government to be a decent employer. Gradually many found lots to admire in the government’s work—in particular, they said, because it eliminated the waste known as profit. Miners and electrical workers declared, “In no place in the world are better conditions to be found than in the Panama Canal Zone, which is entirely under Government control.”

But the labor situation had a darker side, Greene notes, which is now largely overlooked.  She writes:

The touted efficiency of the canal project was made possible by rather draconian policies. Chief engineer George Goethals would not recognize unions, used spies and deportation to crush attempts at labor organizing, arrested workers deemed unproductive (for vagrancy) and imprisoned them and relied upon a vast segregation system—known as the silver and gold payrolls—to divide workers and break the power of both unskilled and skilled workers.

These so-called gold workers—machinists, steam shovel engineers, railroad workers and the like—received relatively high wages, free housing and paid vacations for their efforts. One can see why they waxed enthusiastic about government control.

But most of the workforce—the silver workers who dug the big ditch—came from the West Indies and from southern Europe, and they faced much worse conditions. They lived in shacks lacking screens on the windows, failed to receive paid vacations or sick leave and were excluded from the nice cafeterias and hotels the government built. And the labor surplus government officials carefully cultivated made it impossible for them to strike or organize.

Panama Canal expansion workers last summer were able to help force the suspension of a national anti-union law by striking, along with thousands of banana workers. Once the expansion is complete, perhaps the greatly increased workload will empower longshoremen’s unions on the East and Gulf Coasts. Or it might also give more leverage to employers and shipping companies pitted against the progressive longshore union on the West Coast, where ports will be under pressure to maintain their dominance and can use that as an excuse to cut costs.

In her blog, Greene concluded that the historical construction of the Panama Canal is a parable for U.S. labor practices and foreign policy today:

Many of the strategies devised during the canal construction became standard tools across the long 20th century and into the 21st: wide-scale mobilization and segregation of labor; reliance on labor surplus and tactics that divided workers against one another in order to contain militancy; recognition of citizenship for certain (skilled, white, U.S.) workers, while important rights were denied to foreign workers; and strenuous limits on the right to collective organizing, even for the most powerful and skilled U.S. workers.

Many of these strategies sound familiar to us even now.  Today, workers still dig the ditches of U.S. power abroad. The papers don’t report on their struggles too often. Many of them are U.S. citizens, many are not, but all are toiling in diverse ways. And you can bet they face, to a remarkable degree, the same sorts of challenges confronted by the machinists, steam shovel engineers, diggers and track layers who built the Panama Canal.