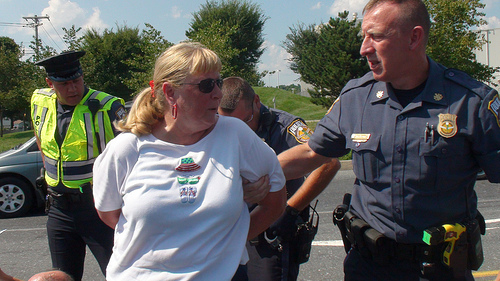 SEIU Local 668 President Kathy Jellison is arrested while staging a sit-in at a Hershey subcontractor's warehouse.   (Photo by The Rick Smith Show, on Flickr)

In Palmyra, Pa., about 400 guest workers from a variety of countries walked off the job and staged a strike on Wednesday to protest their working conditions and pay at a warehouse run by a Hershey subcontractor. Guest workers presented a petition to management and then marched out. Three labor leaders—Pennsylvania AFL-CIO President Rick Bloomingdale, SEIU President Healthcare Pennsylvania Neal Bisno and SEIU Local 668 President Kathy Jellison—were arrested after staging a sit-in at the warehouse's entrance.

The guest workers were supposed to be paid $7.85-8.35 an hour. The workers, however, were forced to live in company housing and were charged $395 a month for rent – nearly twice the rate of rent for Americans living in similar housing in rural central Pennsylvania, according to the National Guestworker Alliance spokesman Stephen Boykewic. After deducting rent and other fees from their paychecks, guest workers took home between $40-$140 a week.

The J-1 program is increasingly being exploited by companies looking for sources of cheap labor. According to a report by Economic Policy Institute, in 2010 353,602 people enter the United State every year to work on the J-1 visa program. Workers routinely have wages for exorbitant rent taken away from them in schemes similar to the Hershey warehouse workers. Guestworkers are especially easy to exploit since if they speak up, they can be deported if companies withdraw their visa.

“We have heard cases of this all over the country. The J-1 program is completely out of control. State Department is not the right agency to be running this thing,” says EPI immigration policy analyst Daniel Costa. “It’s basically a guestworkers program and it’s not run through Department of Homeland Security or Department of Justice. The State Department does not have the have expertise, experience or interest it seems in regulating the labor market.”

State Department Spokeswoman Beth Gosselin responded to In These Times: “US Department of State is engaged in a fact-finding mission about the incident in Pennsylvania. We take the responsibility for the J1 visa program seriously. We are making sure that the companies that are sponsoring these students ensure that the rights of these students are meeting.”

Costa disputes that the State Department, with its small staff, can seriously regulating the program. They outsource the responsibility to their sponsors. They are basically stamping papers," he said. "Even if they find out some sponsor running this thing is doing something wrong, the only remedy they have is to cancel the designation of the sponsor and another sponsor with a different name springs up to do the same scheme."

The State Department has no expertise in how to regulate employment relations so there is no way that they can regulate this guest worker program effectively.

The J-1 visa program is increasingly being exploited by employees looking to find cheap labor, especially in the area of farm work, where growers are experiencing a shortage of labor as ICE cracks down on undocumented workers. According to the North County Times, the J-1 visa program “already places interns and trainees in all fields of agriculture from Maine to Florida to California and Hawaii.”

As more and more corporations like Hershey’s subcontractor Exel look to programs like the J-1 as sources of cheap labor, regulating these guest worker programs may become a big issue. However regulation can only be effective if workers feel comfortable reporting their problems.

Since their visas depend on their employers, guest workers can be easily intimidated by employers to not report labor rights violations. According to National Guestworker Alliance spokesman Stephen Boykewich, guestworkers at the Hershey warehouse were forced to attend captive audience meetings and were threatened with deportation if they organized. In their home countries, recruiters sent threatening e-mails to the guestworkers, called their parents. In one instance, according to Boykewich, a recruiter flew to Pennsylvania from China to threaten the guestworkers.

The Hershey workers were able to speak up about this problem as a result of community allies. According to Boykewich, about six weeks ago a guest worker walked into a local legal aid clinic and asked what they could do about the situation. The legal aid clinic put the student and other upset students in touch with local labor leaders and community allies. Community allies, upset that 400 jobs that could be going to Central Pennsylvania residents were instead going to exploited guest workers, vowed to stand by the guestworkers and fight deportation if workers went on strike.

“Unemployed workers here connect with them, they had allies. They are all part of the same chain of decades of subcontracting and outsourcing that led to this,” says Boykewich.

With community support, 300 of the 400 guest workers continued to strike Thursday and will continue on strike until they are paid what they say they are owed. The dramatic protest by the guestworkers and community allies comes months after the dramatic public protests that resulted in 16-day occupation of the Wisconsin state capitol in Madison. It also follows 100 longshoreman being arrested for trespassing in a nonunion port last month in Longview, Wash, illegal strikes at New York City construction sites this month, and the massive ongoing Verizon strike of 45,000 workers that began this month.

“We are seeing a very real shift happening. The solidarity between a group of essentially captive guest workers and American workers is unusual, and gets right at the heart of both global labor patterns and the hallowing out of the American economy,” says Boykewic, who added:

"There was something iconic about Wisconsin and there was a new infusion of energy. Before there was a national conversation happening at kitchen tables about the individual problems workers were having, but not at national discourse in the media. Wisconsin was the catalyzing moment that created an energy of people thinking about these connections between each other. ..."

The strike and protest at the Hershey factory and other recent dramatic actions indicate that we may be in the early stages of a wave of dramatic worker action.

Workers, it seems, may have reached a breaking point as corporations lower wages and governments cut important social services. As workers around the world from London to Chile to Greece protest corporate abuses and government cuts, it appears that things in the United State may finally be boiling over.