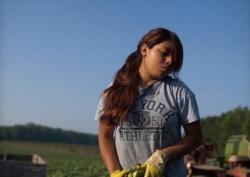 Minors working on American farms are some of the most vulnerable workers in the country. Current law allows children as young as 12 to work on farms, and many of them wind up working with dangerous equipment. (Disturbing fact: Minors working in agriculture are six times as likely to be killed in accidents as minors working in other industries.)

This week the U.S. Department of Labor proposed revisions to federal laws aiming to protect children from working in dangerous agricultural occupations. The urgent need for tightened regulation was highlighted by the deaths of two 14-year-old girls who were electrocuted on an Illinois farm this summer. "Children employed in agriculture are some of the most vulnerable workers in America," Secretary of Labor Hilda L. Solis said. "Ensuring their welfare is a priority of the department..."

Some have grown impatient waiting for the new rules, which also strengthen regulations prohibiting children from working with animals, handling pesticides, and working in timber operations, manure pits and storage bins. The changes proposed this week will now go through a 60-day comment period.

“We have been meeting with the Department of Labor on this issue for three years now,” said Justin Feldman, Public Citizen's worker health and safety advocate. “We thought this rule would go quickly.”

Chalk it up to federal bureaucracy: The DOL proposed the rule internally nearly nine months ago, but the Office of Management and Budget delayed reviewing, something that must happen before the DOL can make proposed changes public. Typically rules are supposed to be reviewed within 90 days of being proposed. Office of Management and Budget did not respond for request for comment.

“While getting the rule out of OMB after nine months of waiting is clearly a victory and a sign that things are moving along, there will still be additional delays in getting the rule implemented,” Feldman said.

An executive order issued by the President Bill Clinton in 1993 greatly increased the role of the Small Business Administration and OMB in the rulemaking process. That forces OSHA to go through what health and safety advocates say are unnecessary steps that slow down change and stop the agency from acting quickly to protect the lives of American workers.

“All of these [DOL rule] delays are unnecessary. ... There are problems threatening workers. The rules need to be issued now,” Feldman says.