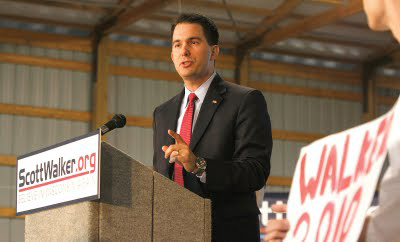 A new Department of Transportation memo reveals how thoroughly Wisconsin Republicans intend to make the newly imposed voter ID process—fiercely opposed by labor—as onerous and expensive as possible for the low-income people seeking the IDs.

Wisconsin's fundamental pillars of democracy have been under sustained pounding ever since Gov. Scott Walker, with a right-wing playbook from the American Legislative Exchange Council tucked under his arm and cash from the billionaire Koch brothers bulging out of his suit coat, was sworn into office back in January.

Within five weeks, Walker had dropped what he privately called “the bomb” on public employees by unleashing legislation known as Act 10, which makes their unions impossible to operate and sustain. The law was approved on a 4-3 vote by the Supreme Court after a fracas in which right-wing Justice David Prosser put his hands on the throat of Justice Ann Walsh Bradley, earning him the nickname “Madison strangler.” Now in effect, Act 10 facilitates the flow of income from public employees to corporations and the investor class in the form of endless new tax breaks.

Clearly, Walker and his allies both in Wisconsin and nationally are intent on constructing a plutocracy that redistributes income and wealth upward to the richest 1 percent and the corporations they control. They have made great progress: The richest 1 percent now vacuums up the same share of national income—about 24 percent—as they did back in 1928. But of course you can’t have a secure plutocracy alongside a thriving democracy; as long as the majority of citizens enjoy full democratic rights, they pose a mortal threat to the privileges of the select few.

So the most basic right in a democracy—the right for citizens to vote for candidates of their choice—fell under the persistent jackhammers of Republicans claiming to be worried about voter-impersonation fraud, although not a single case was brought forward. On the contrary, there is substantial evidence that 4 million to 5 million voters did not cast a ballot in the 2008 presidential election because they encountered registration problems or failed to receive absentee ballots, according to a study by experts in voting. An additional 2 million to 4 million registered voters—or 1 percent to 2 percent of the eligible electorate—were 'discouraged' from voting due to administrative hassles, like long lines and voter identification requirements.

Thus, the Wisconsin Republicans, acting on the basis of an unproven threat, ignored an authoritative study showing the very real problem of people being obstructed from voting. In total, the study estimated that up to 9 million Americans were unfairly denied the right to vote because of bureaucratic barriers. But the Wisconsin Republicans then proceeded to create as many barriers as they could.

Common Cause State Director Jay Heck has labeled the new Wisconsin law as “the most restrictive, blatantly partisan and ill-conceived voter identification legislation in the nation.” The new law will make voting much harder for those who lack driver’s licenses, which includes 23 percent of elderly Wisconsinites, 59 percent of Latina women and 78 percent of African-American men ages 18 to 24. These people will need to acquire state-issued photo identification to vote. Existing photo IDs for students fail to meet the new standard. The Republicans responded with righteous indignation, claiming that the new law allows all eligible citizens to obtain free photo IDs at Department of Transportation offices.

So what’s the problem? This perspective of course overlooks the time and difficulty of getting to a distant DOT office via increasingly limited public transportation routes. Moreover, it ignores the fact that DOT officials have apparently been under pressure from the Walker Administration to demand absurd levels of documentation. In one case, the DOT refused to give a voter ID to an 83-year-old woman who presented the following: her birth certificate, marriage certificate, Social Security card, Medicare card, tax receipts for the home in which she had lived for more than 50 years, and an expired passport.

But the very latest and highly appalling sign of DOT's shamelessly politicized role was exposed when an anonymous DOT worker gave Madison newspapers a copy of a damning memo from a top agency official. The official instructed staffers to avoid telling members of the public that they could receive a free photo ID to use for voting, rather than paying a stiff fee of $28. The State Journal reported:

State Department of Transportation employees have been instructed not to offer free photo identification cards to people unless they specifically asked about them first. “While you should certainly help customers who come in asking for a free ID to check the appropriate box, you should refrain from offering the free version to customers who do not ask for it,” reads an internal DOT memo, which was emailed to employees on July 1 and released to reporters Wednesday. Opponents of Wisconsin’s new law requiring voters to show photo IDs at the polls said the email urged employees to disenfranchise voters by telling them not to help eligible people obtain free IDs.

Disenfranchisement was precisely the fundamental intent of the law. Observed Frances Fox Piven, the author of three books on America’s uniquely restrictive voting laws that are aimed to deny power to the powerless: “We saw labor protests of unprecedented size and intensity [in Wisconsin] over limiting their voice as workers,” Piven says. “And then [protesters] were greeted with a law to limit their power electorally, too.”

This type of punitive, exclusionary voter ID law has spread to about 30 states, although Wisconsin’s law remains the most restrictive. Actively promoting such laws has been the American Legislative Exchange Council, which drafts and disseminates legislation aimed at reinforcing corporate power and diminishing the voice of ordinary citizens. On its website, ALEC—whose funders include billionaires David and Charles Koch (Scott Walker’s second-largest source of direct contributions)—gleefully describes how a 2008 U.S. Supreme Court decision makes it easy to impose new restrictions on voting rights: There “was no requirement that Indiana show prior evidence of impersonation fraud in Indiana to justify a voter ID law.” Indeed, the Wisconsin Republicans had no evidence to present. The Brennan Center for Justice has concluded, “It’s more likely that an individual will be struck by lightning than that he will impersonate another voter at the polls.”

Given this context, the Wisconsin law functions like the poll tax, literacy tests and other notorious “Jim Crow” maneuvers long utilized in the South to arbitrarily deny the vote to African Americans. This time around, the victims will include people with small incomes, including the poor elderly and students, simply because they are strong Democratic constituencies.

But the destruction of public workers’ right to a union voice and the obstruction of voting rights for all citizens have not been the only casualties suffered by Wisconsin democracy. Most notably, Walker and the Republicans have imposed the most one-sided re-districting plan in the state’s history. While Wisconsin has averaged a 53.5-percent Democratic vote in the last five presidential elections, the new districts—unless overturned by a court—would guarantee huge, disproportionate Republican majorities in both houses of the Legislature for the next decade.

Further, throughout the battle over Act 10, the Republicans in the Legislature ran roughshod over democratic standards. Gov. Walker twice spoke about bringing in “troublemakers” to discredit the thousands of peaceful demonstrators, raising the concern of the Madison police chief about the governor intentionally provoking violence. To pass Act 10, The Republicans flagrantly violated the state’s Open Meetings law, which requires advance notice of legislative business. Democratic State Senator Chris Larson declared that the Republicans' actions were consistent with their past conduct: “They shut down the public debate, they shut down the Assembly hearing, they shut down the phone line [the toll-free legislative hotline by which citizens can register their opinions with their legislators], and they closed down the Capitol building.”

Senate Leader Scott Fitzgerald even hinted to FOX News that the real goal of Republicans in attacking public unions was to prevent Wisconsin from voting for Obama in 2012 by cutting off union funds.

With the Republican attack on democracy so flagrant in a state that has cherished open government, the public's reaction has already begun to show itself in the defeat of the two GOP senators in recall elections, Walker's low approval ratings and Prosser's narrow and controversial reelection to the Supreme Court. As the full impact of Republican policies become apparent, the Wisconsin rebellion is likely to heat up again.