When Democrats Prey on Workers, But Protect the Wealthy 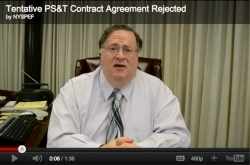 In one important respect, the poodle-for-the-rich governor of New York brings to mind another bullying, immoral politician, George W. Bush. Back when one of the most corrupt and dangerous Administrations in our nation's history had sky-high approval ratings, thanks to igniting a gusher of misguided and illegal revenge and retribution in the wake of September 11th 2001, very few people had the guts to stand up to challenge the mendacity and immorality flowing from The White House. Trillions of wasted dollars later, and more important, hundreds of thousands of dead and wounded human beings later, we pay the price of silence in the wake of popularity.

These days, we have the spectacle of a Democratic governor who, in his insatiable drive for ever more power, is willing to bully and attack the very people who have suffered from the worst financial crisis in decades--and leave untouched and unruffled the very people who helped create the crisis. The polls are silencing voices again--and we will pay the price again.

The state workers are no fools. They understand what the poodle-for-the-rich governor is seeking to do--and they said, "no deal":

The second-largest union of New York State employees has rejected a package of wage and benefits concessions negotiated by the Cuomo administration, blowing a hole in the state budget that could now prompt the largest wave of layoffs in two decades.

The labor pact, reached in July, would have imposed a three-year freeze on wages and higher health insurance costs in return for protection from broad layoffs for two years. That deal was virtually the same one that the largest union of state workers, the Civil Service Employees Association, approved in its own vote last month.

The president of the Public Employees Federation, Kenneth Brynien, said union members were ready to make sacrifices given the state’s shaky fiscal condition. But he said a majority of workers concluded Gov. Andrew M. Cuomo was not being reasonable in the concessions that he sought. [emphasis added]

And now come the threats--and the lies (we'll get to the lies in a minute):

“In this economic reality, rising state work force costs are unsustainable,” Mr. Cuomo said in a statement. Referring to federation members, he added, “I urge them to reconsider.”

Mr. Cuomo’s advisers made clear that they believed Mr. Brynien and other union leaders were to blame for the rejection of the agreement. Howard B. Glaser, the director of state operations, said in a statement that the vote represented “a failure by P.E.F.’s leadership to effectively communicate the benefits of the contract to its members.”

“Layoffs could still be avoided,” Mr. Glaser said, “if P.E.F. clearly articulates to its members the benefits of the contract as well as the consequences of rejection and schedules a revote.”

In fairness to the poodle-for-the-rich governor, he is reading from the same playbook that the rest of the spineless class of elected politicians--with a few exceptions--are studying. It goes roughly like this:

People are angry and they want to blame someone.

We (elected politicians) can't take it out on the "job creators" because those people write the big checks for campaigns.

So, let's blame workers--the very people who had nothing to do with the crisis for the crisis.

Now, as promised, for the lies. And, warning, this gets a bit wonky because, dammit, it deals with FACTS.

Why politicians repeat garbage, from the president on down, is both perplexing and bizarre: the principle reason behind the current budget deficits--federal and state--is the Lesser Depression (if I may borrow Paul Krugman's description of where we are today).

And, as many people, including yours truly have pointed out, taking money out of peoples' pockets--as the poodle-for-the-rich governor wants to do--is the exact opposite thing you do in a financial crisis.

Austerity does not work.

People need money to spend--which would, then, mean the state had more money from taxes. Duh. Ask California Governor Jerry Brown about that basic economic fact.

It has almost nothing to do with state worker costs. This is a lie, as the actual facts show, courtesy of the Fiscal Policy Institute:

New York State has faced significant and recurring budget gaps since the summer of 2008. These gaps are overwhelmingly attributable to the Great Recession which has had a very negative impact on the finances of state governments throughout the country.[emphasis added]

If you want to know why costs have gone up, as that report, using actual facts, points out:

• The recession pushed New York’s poverty up from 14.2 percent in 2008 to 15.8 percent in 2009. A little over three million New Yorkers are below the federal poverty line. Over the last 30 years, there was only one other year when the poverty rate increased this fast.
• The number of New Yorkers receiving food stamps has grown by over one million (+60 percent) since the recession began.
• A record one million New Yorkers lost employer-provided health insurance in 2009, contributing to a projected 4-year 30 percent increase in Medicaid enrollment. Medicaid now covers 40 percent of New York children.

And, actually, the size of New York State government has been declining.

Lie #2: pensions are too expensive. The average pension is pretty modest in New York--$30,000.

Don't believe me. Listen to what a decent public servant has to say about the pension funds--because Comptroller Tom DiNapoli actually looks at the numbers:

According to The Center for Retirement Research at Boston College, pension contributions from state and local employers amount to just 3.8% of state spending, on average. And, according to the National Association of State Retirement Administrators, the number is an even lower 2.9%

In New York, the number is 2.4% of state operating funds.

And it’s important to note that over the past 20 years, 83 cents of every dollar in benefits paid to New York retirees have come from investment returns, not employee or employer contributions. [Emphasis added]

Meaning, the costs of pensions are trivial--and paid for by investments.

Another well worn line of attack on public pension funds is that they are bloated with retirees making six figure pensions. Again, in New York State, the facts suggest otherwise.

Less than one‐half of 1% of those retirees received pensions exceeding $100,000.

So, where did the pension fund money go and why are the funds depleted? Thanks to the financial crisis and Wall Street corruption-incompetence, New York public pension funds lost over $100 billion--with more than $77 billion of those losses coming just in the state teachers' retirement and state-local workers funds.

Exactly. The very people who write checks to the poodle-for-the-rich governor's campaigns are the same people who helped rob the pension funds.

As I've pointed out, the attorney general of New York, unlike the poodle-for-the-rich governor, is trying to hold the banks and Wall Street responsible--and I suspect the governor is playing a behind-the-scenes role in undermining the attorney general's pursuit of justice.

Lie #3. Actually, a different version of Lie #1...budget gaps are due to workers' wages.

The story is simple: over the past 2 decades, a whole bunch of tax cuts have shoveled billions of dollars back into the pockets of the richest people in the state.

And the poodle-for-the-rich governor refused to extend a millionaire's tax--and it was not in the recent budget deal.

There is no deficit crisis--and certainly the crisis has almost nothing to do with workers' pay and benefits.

We know where the money is.

I'll end with this observation. Elected politicians who preen and bully and abuse people when their poll ratings are good are like Icarus: eventually, those wings are going to come off and that fall with be brutal--and justified.

Jonathan Tasini is executive director of the Labor Research Association, a New York City-based nonprofit labor advocacy organization. He blogs at Working Life, a project of the association.