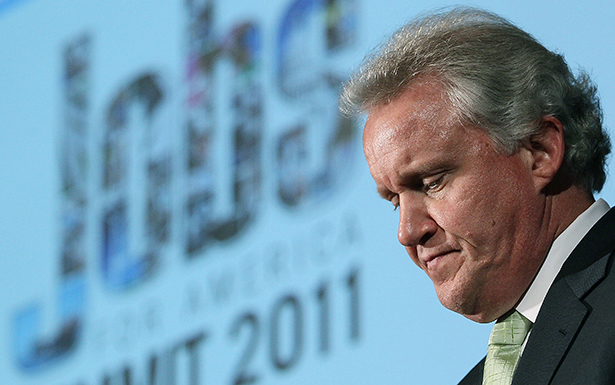 GE CEO Jeffrey Immelt remains the chair of President Obama’s Council on Jobs and Competitiveness despite a deplorable record of destroying U.S. jobs and undermining U.S. competitiveness. From 2004 to 2010, GE slashed its U.S. workforce by 32,000 jobs, from 165,000 to 133,000.

The company has also virtually stopped paying federal income taxes that are vital for public schools and other services to provide the skilled workforce that GE claims to want in the United States. In 2010, GE amassed $14.2 billion in profits in 2010—but still managed to gain another $3.2 billion in tax benefits from the federal government.

The blue chip company has brought the same mentality to pension plans. The corporate media have generally depicted financially-troubled corporations and governmental units as being reluctantly forced to switch from defined-benefit plans to vastly inferior 401(k) plans or even to cut existing benefits. But reality is a bit different, according to Wall Street Journal investigative reporter Ellen E. Schultz, in her new book Retirement Heist: How Companies Plunder and Profit From the Nest Eggs of American Workers:

To justify the cuts, companies complain that they’re victims of a “perfect storm” of uncontrollable economic forces—an aging workforce, entitles retirees, a stock market debacle, and an outmoded pension system that cripples their chances of competing against pensionless competitors and companies overseas.

In December 2010, General Electric held its Annual Outlook Investor Meeting at Rockefeller Center in New York City. At the meeting, chief executive Jeffrey Immelt stood on the Saturday Night Live stage and gave the gathered analysts and shareholders a rundown on the global conglomerate’s health. But in contrast to the iconic comedy show that is filmed at Rock Center each week, Immelt’s tone was solemn.

Like many other CEOs at large companies, Immelt pointed out that his firm’s pension plan was an ongoing problem. The “pension has been a drag for a decade,” he said, and it would cause the company to lose thirteen cents per share the next year. Regretfully, to rein in the costs, GE was going to close the pension plan to new employees. ...

However, there was a major problem with Immelt’s speech and his crocodile tears. Every single word was untrue. The truth, as Schultz points out, could not have been more distant from Immelt’s solumn spiel:

What Immelt didn’t mention was that, far from being a burden, GE’s pension and retirement plan had contributed billions of dollars to the company’s bottom line over the past decade and a half, and were responsible for a chunk of the earnings that the executives had taken credit for.

Nor were these retirement programs—even with GE’s 230,000 retirees—bleeding the company of cash. In fact, GE hadn’t contributed a cent to the workers’ pension plan since 1987 but still had enough money to cover all the current and future retirees.

Retirement planners will tell you that American workers retirement is supported by three legs: their personal savings, their retirement fund (pension or 401K), and their Social Security check. Of the three legs, the only one that is actually sound and solid is the most mocked and maligned: Social Security.

As Dean Baker and Mark Weisbrot document in their book The Phony Crisis and countless articles (see here, here, and here) churned out to counter the non-stop, full-blast claims from both right and center that Social Security is strong and not on the verge of collapse. Baker points out that Social Security trustees’ annual reports show

But as a public program that could be potentially supplanted by privatized plans that would immensely profit Wall Street and are subject to constant barrages of utterly false claims funded by the likes of billionaire Pete Peterson and ridiculous “Ponzi scheme” assertions by Rick Perry, Social Security has become the focus of ongoing debate.

Meanwhile, the problem of nonexistent savings for many older workers, brought on by falling wages for U.S. workers which have slipped back to 1973 levels in real terms, as recent Census data shows, has almost entirely dropped off the radar screens of  the elites of both major parties.

Obviously, when wages are plummeting, workers have no major source of secure savings, especially when home values have been dropping, particularly in working-class communities.

At the same time, corporations like GE and thousands of others have been busy replacing once-secure defined-benefit pension plans with 401(k)s of much more limited value (go here for an array of valuable research by Alice Munnell and others) and that are offered to just 31 percent of private-sector workers, says US News & World Report.

The working lives of millions of Americans are now far less secure than, thanks to outsourcing strategies and low wages offered by GE and its allies in Corporate America. Now the 119-year-old company—about as all-American and blue chip as any—is helping to ensure its new workers will be insecure in retirement as well.