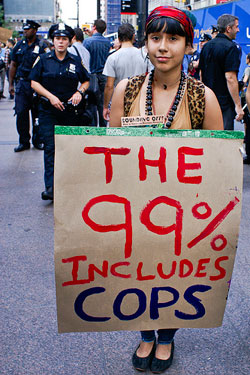 An Occupy Wall Street participant at Zuccotti Park a.k.a. Liberty Plaza, on September 26.   (Photo by Sasha Kimel on Flickr.)

The steel and concrete of Lower Manhattan comes alive every day during rush hour, when gray suits pulse through subway tunnels and the city's arteries get choked with street vendors, construction workers and other folks hustling to make a living. Now that a bunch of rabble-rousers have occupied the neighborhood, the workers who form Gotham's backbone are starting to reclaim their turf as well.

It may be too early to draw parallels between the Occupy Wall Street protests at Zuccotti Park (aka Liberty Plaza) and their antecedents in Tahrir Square and Madison. But the movements suggest a general trajectory of grassroots organizing: a spark of protest led by younger activists, followed by the support of labor organizations, bringing up the rear and then moving to the fore.

By Wednesday, the Village Voice reported, the historically militant Transport Workers Union had voted to back, and provide food and services to, the Occupy Wall Street movement. In a video recorded during an evening protest, TWU Local 100 member Christine Williams declared, "The people have finally woke up. And we're here and we're staying and we're not going anywhere."

TWU spokesperson Jim Gannon told the Voice: " A motion was brought up to endorse the protests' goals; I don't know why it took us so long to do it." Better late than never, the union says it now plans to amass on the afternoon of October 5 and march to Zuccotti Park.

Other labor-oriented solidarity actions have been undertaken by professors at the City University of New York affiliated with the Professional Staff Congress union (of which this author is also a member). Their group, Solidarity with OWS, is organizing a demonstration against police abuse this Friday afternoon. (Other notable lefty academic allies include Frances Fox Piven, Christian Parenti, and Stanley Aronowitz.)

According to Crain's New York Business, local unions are collaborating with community-based groups such as Make the Road New York, Coalition for the Homeless and Community Voices Heard -- all organizations that are in daily contact with the struggles of the city's poor and working-class.

The city's doormen, security guards and maintenance workers see common ground with the occupation, too. The Huffington Post reports that their union, SEIU 32BJ, said that a planned October 12 rally would embrace the current protests' theme:

"The call went out over a month ago, before actually the occupancy of Wall Street took place," said 32BJ spokesman Kwame Patterson. Now, he added, "we're all coming under one cause, even though we have our different initiatives."

The General Assembly, a proudly amorphous body that is helping coordinate the demonstrations, has set up a Labor Support and Outreach Working Group, which, according to September 29 meeting minutes posted to the Assembly's website, has encouraged protesters to join a demonstration of the Communication Workers of America nearby. Organizers are reportedly gearing up "to carry out a very creative direct action in support of the phone workers."

The convergence between the Wall Street occupation and labor activism may escalate in the coming days amid a standoff between New York Governor Andrew Cuomo and public sector workers. The statewide Public Employees Federation just voted narrowly to reject a five-year contract that would have staved off layoffs at the expense of higher healthcare costs and wage freezes. On Tuesday, PEF union president Kenneth Brynien told reporters that when members saw the concessions demanded of them, "The sacrifices were too great, and they said, 'Enough is enough."

That axiom would fit nicely among the panoply of anticapitalist slogans that protesters have displayed in Downtown Manhattan, proclaiming "People over Profit" and "Heal America, Tax Wall Street."

As sister campaigns emerge in other areas under the banner of "Occupy Together," the Wall Street actions could serve as a kind of petri dish for future protest tactics, building on the occupational groundwork laid by smaller demonstrations, such as a recent encampment at City Hall to protest budget cuts, and a Wall Street protest in May that drew union support from 1199 SEIU and the United Federation of Teachers.

As ITT's Akito Yoshikane reported, the lifeblood of the protests has been the young and the frustrated. But the occupation also represents swelling resentment across all sectors of society -- covering expressly the 99 percent of us who are getting screwed and shafted by corporate moguls and, more tragically, our own elected representatives.

Yet the proactive anger has been building in the labor movement far from Wall Street. An editorial by the Socialist Worker points to protests in recent months -- by longshoremen in Washington, striking hospital workers in California, and the groundbreaking Verizon strikers -- as signs of new "fighting mood" among the rank and file:

Workers haven't yet prevailed in all of these struggles, nor will all of them win in the future. But what unites these fights is the activism and solidarity on display, despite a hostile corporate media and aggressive employers.

Labor's new sparks of resistance are proof positive that the defiant spirit of the battle in Wisconsin last winter wasn't a flash in the pan, but a sign that growing numbers of working people are rediscovering their capacity to struggle. After decades of a one-sided class war, the fightback has begun.

Whether organized labor is finally catching up to youth activists, or the young occupiers are at last rekindling an older legacy of mass resistance, the cross-fertilization of movements is underway. Don't ask the diverse alliance to state their agenda -- the movement is organically structured, with no formal "list of demands" yet, and that's part of the fun. Not everyone came to Wall Street knowing exactly what they wanted, but everyone there today knows they've had enough, and that they're not the only ones.