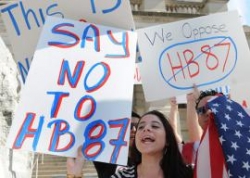 The We Belong Together Delegation gathered in front of the Georgia capitol building on September 29 to raise awareness about HB 87.   (Photo from webelongtogether.org)

The words "undocumented worker" evoke images we're all familiar with: poor day laborers huddled on a street corner, sun-battered tomato pickers hauling buckets through the fields. One image that people often overlook is a far more intimate presence: the nanny caring for our kids, the home aide comforting our ailing parents, the quiet mother waiting nervously outside the doctor's office.

Immigrant women are present in every aspect of American life, in the workplace and in the home, yet they're among the most invisible. They're about to be shoved further into the shadows as states move to crack down on the undocumented and relegate them to the margins of society. So a coalition of activists came to Atlanta, Georgia this week to raise the visibility of immigrant women as workers and community members, as the state moves toward policies that could give the police unprecedented powers to profile, arrest and detain immigrants arbitrarily.

In a statement opposing the controversial HB 87 law, the We Belong Together Coalition declared:

This law is part of a string of concerted efforts by state and federal officials to criminalize, detain, and deport undocumented immigrants. Based on what we have heard, these federal and state policies are tearing families apart and spreading fear in communities of color. Signed into law in May of this year, HB 87 gives local police officers authority to question and arrest people for perceived immigration violations. It is now a crime to live or work in this state without documentation. ...

As women, mothers, and Americans, we are outraged by anti-immigrant policies like HB 87. They violate fundamental human rights and shake the foundations of our communities and families. But we were also deeply touched and inspired by the courage we have witnessed. There is a long history of organizing for immigrant rights in Georgia and the law has galvanized people encouraging them to stand up for themselves.

The delegation, led by Domestic Workers Alliance, National Asian Pacific American Women's Forum, and others, described the stories of women who had suffered indirect consequences of anti-immigrant policies, due in large part to the intense culture of fear that deters women from coming forward about abuse they've suffered or seeking help from public institutions. Anxieties about any contact with authorities -- even as the victim of violence -- could turn many women away from seeking law enforcement protection, which further segregates immigrants, whatever their legal status, from the rights they deserve under the law.

Already, under current immigration policies, a woman who fears getting caught without papers may often make a cruelly rational choice to stay with an abusive partner, rather than report domestic violence--in hopes of avoiding deportation or separation from her children. Many women may also forgo basic health care for themselves or their children for fear of coming under the radar of law enforcement. According to one testimonial:

Lourdes, the mother of four children, explained how people are terrified of even going to the grocery store. She also testified that these laws make it more difficult to access health care or other essential services for their children, many of whom are US citizens. When she tried to get health insurance for her US born child, it was denied. In her words, "I pray that my family doesn't get sick."

Georgia's immigration law, like other "copycat bills" introduced in various states, follows the template of Arizona's infamous SB 1070 (which We Belong Together has also protested). Though the Georgia legislation and a similar Alabama law have both recently been challenged in court, the basic impact of these measures is to encourage police to enforce immigration violations the way they currently treat regular crime. Politicians market this approach as upholding law and order, but it's actually about amplifying fear, which means that immigrant women will have even more reasons to hide.

And despite the law-and-order rhetoric, such policies effectively undermine the protections of labor laws. Immigrant advocates have charged that SB 1070, for instance, would unfairly restrict day laborers from seeking work. In gendered sectors like domestic work, women are vulnerable to unique and more subtle forms of abuse. Although (or because) they tend to work inside the household, outside the purview of police, they're exposed to a range of hidden threats, including sexual harassment, excessively long work hours, and wage theft.

Some of those women were seen and heard for a moment this week in Georgia, but in the long run, they'll remain eclipsed by fear. The passage of yet another anti-immigrant bill seems like just more proof that the law exists not to protect them, but to keep them out of sight.