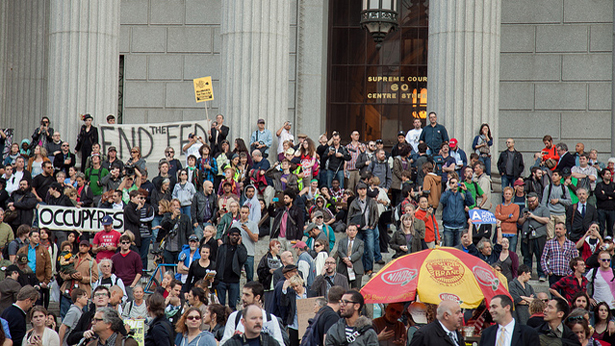 The Occupy Wall Street protests, spreading to cities throughout the country, have brilliantly distilled  the essence of corporate and government policy in recent years: The richest 1 percent engorge themselves at the expense of the bottom 99 percent.

No matter how much the corporate media deride the Wall Street Occupiers for not presenting a compact set of demands, commentators and pundits must face this reality. The protesters and their new allies in labor have been hammering away at the stunning new levels of inequality pervasive in America. While 25 hedge-fund managers-on Wall Street collectively raked in $25 billion last year, in inflation-adjusted terms wages have receded all the way back to 1973 levels, as economist William K. Tabb notes.

Recent figures show that the 23.5 percent share of income claimed by the richest 1 percent—more than the bottom half of the U.S. population—is the highest share since 1928, just before the US economy exploded into the Great Depression. Even the CIA’s annual World Factbook, which ranks nations on a “Gini” formula for inequality, places the U.S. in the company of the Philippines, Ecuador and Rwanda rather than more egalitarian western democracies.

It's therefore no surprise that the occupiers’ fundamental message resonates with Americans.

Nonetheless, policy in Washington among elites in both parties continues to be profoundly shaped by a circle of elite intellectuals like That Used To Be Us co-authors Thomas Friedman and Johns Hopkins Professor Michael Mandelbaum.

They obliviously ignore the reality of rising inequality, dismiss job loss as a consequence of inevitable and skill-based technological change, blame U.S. workers for not pursuing enough education on their own and call for a pro-corporate re-orientation of government that sounds curiously similar to that of Republican hard-liners like Wisoonsin Gov. Scott Walker.

For Friedman and Mandelbaum—as with Walker—the crucial task is not to destroy government but to use it as an instrument for transferring more wealth and public resources away from ordinary citizens to corporations in order to bring out the most innovative forces in the private sector. In the eyes of Mandelbaum, this will require what might be called a sadistic-love approach from government.

Mandelbaum argues that the leading task of America’s government is not a relentless focus on job creation and protecting job and retirement security. Instead, says Mandelbaum:

The great task of government and of leadership is going to be about taking things away from people.....to lead now is to trim, to fire or to downsize services, programs or personnel.

Rather than whining about what they have lost, Americans should begin improving their own skills so that they can step up to provide more value for their employers. If jobs are being lost to overseas locations—whose wages and working conditions are almost never mentioned by Friedman, Mandelbuam or other enthusiasts of corporate globalization—then Americans must improve their educations and add to their skills.

If Americans truly want prosperity, they must decide to don what Friedman calls the “golden strait-jacket” of a political system that is sharply constrained by the need to constantly provide new incentives to corporations and to continually re-orient society toward the demands of the investor class.

While polling of the long-suffering public shows consistent and overwhelming majority support for taxing the super-rich, refraining from cuts in Social Security and Medicare, establishing a Medicare-for all healthcare system and halting the offshoring of middle-class jobs, it is elite intellectuals like Friedman and Mandelbaum who are shaping the thinking of both Democratic and Republican officials as they formulate policies moving in precisely the opposition direction of democratic sentiment.

The democratic voice of the people may be clear, but it is the ravings of men like Friedman and Mandelbaum that matter because their views happen to coincide with the interests of the richest 1 percent.

Obama, despite his progressive pro-jobs message, has agreed to $320 billion in cuts in Medicare and Medicaid, proposed an historic reduction in Postal Service delivery and supports three unpopular "free trade" agreements.

This pattern exemplifies what Noam Chomsky in Failed States called America’s “democracy deficit,” the gulf between what the majority wants and the elite-driven policies that public officials in Washington actually deliver.

In this way, America not only ranks with the Philippines and other nakedly elite-run societies in terms of income equality. It also shares the same form of pseudo-democratic governance.

These gaps—between democratic rhetoric and top-down domination, between smug satisfaction in America’s middle-class nature and the reality of the richest 1 percent living in a a universe of their own—explain why Occupy Wall Street has ignited the fuse of popular outrage across the nation.