Verizon Workers to iPhone Lovers: Side With Us 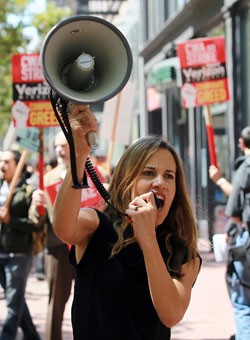 Union workers picket outside of a Verizon Wireless store in solidarity with striking Verizon union workers on the East Coast on August 17, 2011 in San Francisco, California.   (Photo: Justin Sullivan/Getty Images)

A Verizon worker in San Francisco frets about his job. He tells me his company wants him to start sending the customers he once served to the self-serve computer section in the store. Management wants the staff that once served customers one-on-one to follow the new policy; it's testing the move to see how many customers adapt. “You know what THAT means,” the worker, who would only speak anonymously out of fear of reprisal from management, tells me quietly. “I’m worried my job will disappear. That’s how its starts.”

He's probably not alone in worrying about the future of his job. It's been nearly two months since unionized Verizon workers, who are members of Communication Workers of America and the International Brotherhood of Electrical Workers, went to back to work without a contract.

On August 7, 45,000 workers went on strike for two weeks as CWA and IBEW union negotiators tried to hammer out a contract. No deal was reached, but they agreed to return to work after both sides agreed there was progress on talks. Verizon, which posted a $3 billion profit in the first half of this year, wants employees to pay more for healthcare, among other concessions.

There's still no deal—which is why the two unions and progressive allies including MoveOn.org are launching their new "i-Won't Campaign," which asks iPhone users to delay upgrading to the new version of the phone (announced this week) until the company agrees to stop "downgrading" middle-class jobs.

“How do we keep good jobs in our country? Verizon has outsourced 25,000 jobs — that is extremely shortsighted,” Candice Johnson, CWA spokesperson told In These Times. “The only way we will get out of the economic mess we are in is if we quality jobs… not dollar store jobs. There will be no economic turnaround until we get quality jobs.”

Verizon started carrying the iPhone earlier this year, and customers queued outside store doors waiting to buy their long-awaited device. Despite the phone's immense popularity, unions are betting on consumers supporting the workers by waiting to upgrade to the newest version.

A spokesman for Verizon said in a statement, “silly PR stunts that are intended to harm customers and Verizon Wireless employees are not going to change the company's determination to negotiate an agreement which addresses the needs of the wireless business.”

The campaign is also calling on Verizon to pay its fair share in federal taxes by avoiding the tax loopholes used to pay virtually nothing at all in federal corporate income taxes.

Ed Mooney, CWA District 2-13 Vice-President, stated:  “…why should the American public subsidize Verizon’s attack on the middle class with billions in tax rebates? As Congress considers drastic cuts to Social Security, Medicare, and hundreds of programs that the country depends on, we think Verizon and Verizon Wireless’ tax breaks should get a second look."

Negotiations continue—and another strike remains possible. Chris Shelton, CWA vice president of District 1, told Crain's New York: “We'll continue to meet with the unions as we work towards an agreement that recognizes the state of the wireline business and balances the needs of all sides.