Building on Occupy Wall St., ‘Take Back Chicago’ Protests Keep the Pressure On 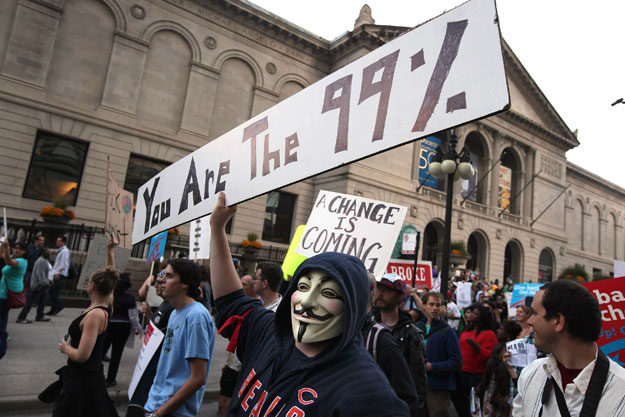 Demonstrators march down Michigan Ave. on October 10 in Chicago. Several thousand people participated in the protest organized by a coalition of community and labor groups, and about 20 people were arrested at the protest.   (Scott Olson/Getty Images)

Actions by coalition of community groups and unions continue all week

CHICAGO—As he watched thousands of protesters march away from the Chicago Board of Trade building at about 4:45 p.m. yesterday, one sidewalk observer had a few questions. "It's understandable what they're complaining about. But what are they asking for?" asked the man, who works at the CBOT and would only speak anonymously. "What is the change they are asking for? They should be more specific."

In chants and on handmade or mass-produced signs, the protesters—mostly members of unions and community groups, but all part of the "Take Back Chicago mobilization" that filled downtown Chicago's streets during rush hour on the Columbus Day holiday—were asking political leaders in Chicago, Springfield and Washington to do many things, some more specific than others: Halt foreclosures, end the Iraq and Afghanistan wars, break up "too big to fail" banks, get corporate money out of politics and prosecute those responsible for fraudulent mortgage practices, among others.

It was a cacophonous showing, to be sure, one familiar to any veteran of the recent progressive protests. But it was also an impressive display of organizing power and popular anger: The CBOT protest, held across the street from the stubborn Occupy Chicago encampment at La Salle and Jackson avenues, was one of five different protests that converged at about 5 p.m. outside of a reception of the Futures Industry Association held at the museum's Modern Wing. Suited reception attendees trickled across the Nichols Bridgeway (from which protesters were blocked) to reach the reception, staring down at about 5,000 protesters filling Monroe Drive below. The Mortgage Bankers Association also met in Chicago on Monday, part of the reason for its timing.

The protesters' central chant, building on the central demand of the ever-growing Occupy Wall Street movement that reached Chicago two weeks ago: "We are the 99 percent." The Americans who aren't benefiting from the current system. Stop the austerities, and start creating jobs.

The message outside of the CBOT was clear to Christian Pritchett, 25, who listened the protesters, mostly members of the Chicago Teachers Union (looking to increase school funding for a proposed longer school day) and Action Now! (challenging banks foreclosure practices).

"Equality for all people. It ain't a black or white thing, everyone is in the situation now," Pritchett said. "I'm glad this is going on, it gives me hope for a better future. … People need to hear what these people are saying."

Stand Up! Chicago, the coalition group that organized protests, has a more specific demand to help achieve the last goal, one likely opposed by the CBOT employee as well as members of the futures industry who gathered at the Art Institute: a $1.4 billion tax (25-cent per contract) levied on trades at the CBOT and the Chicago Mercantile Exchange (jointly owned by the CME Group) to fund a jobs program.

The protest's themes were nothing new. In fact, for years many of the groups behind yesterdays actions have been putting bankers "on notice" about how the recession and its jobless aftermath—caused by rampant speculative and fraudulent practices in the real-estate market and in Wall Street—have damaged American lives, with little to show for it in terms of job growth and new rigorous regulations.

National People's Action (NPA) "Showdown in America" began more than two years ago. In October 2009, NPA, the Service Employees Union (SEIU) and the AFl-CIO staged the "Showdown in Chicago"  outside a hotel hosting the American Bankers Association. Activists called for banking industry reforms. In May 2010, they staged a "Showdown on K Street" in Washington D.C. to push for financial industry reforms.

But Monday's coordinated protests, at which 20 people were arrested, appeared newly infused with frustration—and, more important, a sense of solidarity among activists. (And theater—see this Robin Hood kayak video). That undoubtedly has to do with Occupy Wall Street and the increasingly visible street protests and rallies it has spawned across American, and now abroad. Plenty of yesterday's protesters were bused into the Loop by NPA, SEIU and other established groups, but plenty of folks just showed up on their own—like Jim Wagner, a 56-year-old retired electrician who decided to travel 60 miles from his home in Braidwood, Ill., to the march after hearing House Majority Leader Eric Cantor (R-Va.) call Occupy Wall Street protesters "a mob."

"There's a lot of frustration here," Wagner said. "The Tea Party says they represent the working class, but they don't. I've always looked at Americans as pretty apathetic. But since we've been in such a long recession, people are starting to wake up."

Indeed, the Take Back Chicago protests—which continued today with a focus on banks' illegal "cash for keys" foreclosure practice—coincided with a growing sense of inevitability that a "double-dip" recession has just begun. And a new study released yesterday makes official what millions of struggling families already know: the Great Recession never really ended, unless you only count GDP growth that doesn't trickle down to most Americans.

As The New York Times reported, the much-ballyhooed "recovery" that officially followed the recession's end in June 2009 coincided with a greater decline in household income than during the recession itself. In other words, the "recovery" was essentially limited to the corporate/investor class—and now, even that seems to have stalled.

Wagner, who traveled to Madison, Wis., earlier this year to protest (ultimately successful) GOP efforts to eliminate most public-sector collective bargaining rights, said Monday's protest was far more diverse than Madison's, which he said was mainly full of the "over 40 union group."

"Here you have a cross-section of America, the young, the old," he said as the protest began to wind down after 6 p.m., when horse-mounted policemen began slowly clearing protesters from Monroe Drive. "This has hit the grassroots. I think it's going to last."