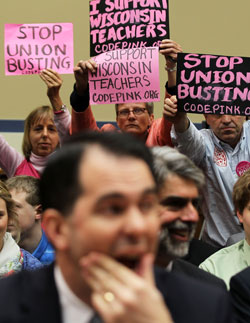 Coalition of Democrats and labor activists make it official

MILWAUKEE—Legislative supporters of Wisconsin's labor movement recently requested a symbolic step: removal of the portrait of Jeremiah Rusk, who approved the massacre of seven people during the May 5, 1886 strike for the 8-hour day on Milwaukee’s southeast side. “I seen my duty and I done it,” boasted Rusk, who butchered the English language with the same zest with which the state militia under his command slaughtered defenseless workers.

This week, Wisconsin Democrats and labor supporters announced their intention to remove someone else unfriendly to labor: Gov. Scott Walker, who triggered a massive labor uprising earlier this year in Madison that drew international attention with his successful but often-underhanded drive to strip almost all public workers of virtually all of their collective bargaining rights.

A coalition including Wisconsin Democrats and the United Wisconsin organization declared that on November 15, it will begin gathering signatures on petitions for his recall. (Elected officials must hold office for one year before being eligible for recall in Wisconsin; Walker was sworn in January 3, 2011.) If the coalition can gather 540,000 signatures within 60 days, then the unpopular Walker will be pitted against a Democratic challenger sometime in the spring, perhaps in May. Some 200,000 Wisconsinites have already pledged to support the recall.

While Walker's close ties to the billionaire right-wing Koch brothers and corporate funders ensure him plenty of money for the looming fight, victory is far from assured.

Among the key factors:

MOTIVATED OPPOSITION: Walker has aroused the ire of nearly 200,000 public employees. If they can mobilize themselves and their family members, friends, and allies, they would be a massive force.

Walker’s Act 10 also placed heavy pension and healthcare benefit costs on workers, who now must pay 5.8% of their earnings for their pensions and 12.6% of healthcare costs.

The exact scope of these new costs were recently disclosed. For teachers, nurses, highway workers, hospital workers and other public employees, these new costs mean pay losses between $2,828 and $8,428 a year, states a recent report by the Legislative Fiscal Bureau. Democratic legislators have pointed out that the higher contributions translate into an 11.3% pay cut for the $25,000-a-year worker, but mean only 6.7% for reduction for state employees making $125,000.

More fundamentally, the workers' pension and healthcare benefits had always represented deferred wages, in that they had to sacrifice pay increases for the benefits, as tax expert and author David Cay Johnston has pointed out.

APPROVAL RATING IN TOILET: Walker’s approval rating has plummeted to 37%, according to a July poll (the most recent available). Except for one poll by the right-wing Manhattan Institute, a variety of more public opinon polls have consistently shown support for public-union rights in Wisconsin well over 60%, with parents of schoolchildren backing union rights especially ardently.

INVESTIGATION DANGLING ABOVE HIS HEAD: Walker could potentially suffer immense political damage from a “John Doe” investigation looking into alleged improprieties in his 2010 campaign for governor.

As previously reported here, the FBI raided the home of a close Walker aide. Several of Walker’s top aides have accepted immunity in exchange for their testimony. Further, as the Milwaukee Journal Sentinel reported,

The secret investigation has already netted at least one conviction. William Gardner, president and chief executive officer of Wisconsin & Southern Railroad Co., was sentenced to two years' probation after pleading guilty to two felony violations of state campaign finance laws for exceeding the donation limits and laundering donations to Walker and other Wisconsin politicians.

According to the astute statistician Nate Silver writing on his 538.com blog, published by the New York Times:

If you are going to read into the results, it is probably best to compare them to Mr. Walker’s performance in 2010.

That would point toward a recall vote that would be too close to call: Republicans would have gotten 49.4 percent of the vote, and Democrats 50.6 percent, according to this method.

REPUBLICAN EXCESSES UNCHECKED: With Walker in office, Republicans have enacted laws that are both blatantly partisan and extreme—more are in the pipeline.

Voter ID designed to suppress voting: The Republicans have already adopted a voter ID bill labeled by Wisconsin Common Cause director Jay Heck as “the most restrictive, blatantly partisan and ill-conceived voter identification legislation in the nation," as discussed here  and here.

Partisan redistricting: The GOP also rammed through what many observers have called the most partisan re-districting in the state’s history, minimizing the voice of African-American and Latino voters while exaggerating the strength of the Republicans.

There are many more recent examples of Republicans proposals that trample on safeguards against self-interest and secrecy:

Letting the governor set the rules for own election:

Republican lawmakers signaled ….that they will likely give Gov. Scott Walker authority over how recall petitions can be gathered, just as Democrats gear up to recall him next year.

The move would allow Walker to halt a policy developed by nonpartisan election officials that, at least in theory, could make it easier for groups to gather signatures to recall the governor, as well as legislators from either party.

• Concealing sources of legal payoffs: State Sen. Glenn Grothman, one of the Right’s true wing-nuts in the state as he showed during his interviews on MSNBC, has now proposed ending public disclosure of campaign contributors’ employers so that the influence of corporate interests could not  be so easily traced. (Full disclosure: as a lobbyist for the distinctly left-of-center Wisconsin Citizen Action, I actually worked closely with then-legislator Scott Walker to win passage of this bill in 1998.)

Coupled with the U.S. Supreme Court’s horrendous Citizens United decision allowing unlimited contributions directly from corporate coffers, the weakening of this law would remove one of the last protections against a full-blown plutocracy. The puppet strings being pulled would no longer be clearly visible.

Such overt moves to tilt the playing field carry a stench of partisan self-interest that has consistently backfired in Wisconsin history. If the Republicans keep it up, their antics won't help Walker’s chances in the recall election.