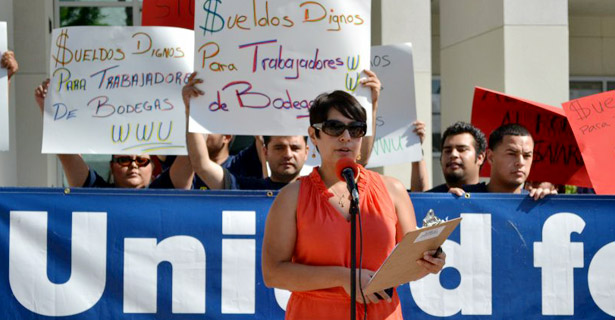 Juan Chavez and Everardo Carrillo are among thousands of immigrants who work unloading semi-trailer trucks in California's "Inland Empire," a vast sprawl of warehouses where goods arriving in container ships from the ports of Los Angeles and Long Beach are staged for distribution to Walmart and other stores around the country.

Until last year, workers earned $12 to $17 an hour at warehouses run by Schneider Logistics, a Wisconsin-based company that was the target of a class-action lawsuit filed by the group Warehouse Workers for Justice in Chicago earlier this year.

On Monday, the California group Warehouse Workers United filed its own class action lawsuit charging Schneider and other logistics companies with labor law violations related to common tactics in the industry. Another of the defendants, Impact Logistics, was last week raided by the state labor department and issued a $499,000 fine. Another of the defendants in the lawsuit, Premier Warehousing Ventures, got a citation from the labor department, which continues to investigate other California warehouses that supply Walmart.

The lawsuit says Schneider introduced shifting layers of subcontractors who hired temporary workers and began paying a so-called “piece-rate” based solely on the number of trucks they loaded or unloaded—even though workers were still required to do other tasks not related to loading and unloading.

In other words they were forced to do unpaid work, and they also weren’t paid piece-rate for trucks that were not fully loaded or unloaded when their shift ended, the lawsuit says. The logistics companies also refused to reveal the formula they supposedly used to calculate how many trucks were unloaded by how many workers or the pay rate, according to the lawsuit and the California department of labor.

Quoted in the website of the magazine Occupational Health and Safety, California labor commissioner Julie A. Su said:

Warehouse workers do some of the most backbreaking jobs in our economy...Their work is often hidden from public view and there is constant pressure to work faster, which can lead to abuse. In this case, workers were paid piece rate to unload containers. Piece rate workers must receive at least minimum wage and overtime for all hours worked.

While workers were told their pay would increase as a result of the piece-rate system, the lawsuit alleges their pay actually decreased significantly and violated federal and state minimum wage and overtime laws.

The lawsuit alleges that Chavez, Carrillo and four other named plaintiffs and other workers were “forced to work long hours, under oppressive workplace conditions, for legally inadequate pay,” often working seven days a week. It  charges the logistics companies with a “wrongful scheme to hide and then cover up the extent of their wrongdoing by failing to keep mandatory payroll records, falsifying records of hours worked and compensation owed, and concealing, denying and/or misrepresenting to the workers the amount of their earnings and on what basis these earnings were calculated.”

The lawsuit notes that workers – most immigrants who speak little English and have less than a high school education –  typically labor in heat over 90 degrees doing strenuous physical tasks including unloading and breaking down pallets. Studies have shown warehouse workers suffer frequent musculoskeletal injuries and respiratory distress from breathing in dust from the containers, often working without safety equipment or adequate ventilation.

Along with Schneider Logistics the lawsuit names three other logistics companies based in North Carolina and Tennessee and a host of unnamed logistics companies. In the industry it is common for such subcontractors to form and dissolve frequently leaving little paper trail behind, making it difficult for workers to protect their rights when they are not even sure who exactly employs them.

In Chicago and California, the groups suing Schneider have called on Walmart to take responsibility for the actions of the logistics companies that bring products to its shelves.

The California labor department alleges Impact Logistics –one of Schneider’s affiliates -- did not pay workers based on accurate statements of hours worked, illegally deducted from their paychecks for uniforms and background checks and violated laws regarding workers compensation insurance.

Defendants deliberately, but unlawfully, conspired to keep this information secret from plaintiffs and their co-workers, to increase defendants’ control over the workers, to maximize their own profits at the workers’ expense, and to prevent the workers and state and federal labor enforcement authorities from discovering the nature and extent of defendants’ pervasive law-breaking as alleged herein. Defendants also routinely falsified, and continue to falsify, payroll records that are supposed to reflect the number of hours actually worked by plaintiffs and similarly situated workers and/or the number of “pieces” completed by them.

The lawsuit demands an end to the alleged illegal practices and backpay for workers. When workers complained or asked for more information about the pay system, the lawsuit says, their bosses retaliated by sending them home without pay, firing them, and otherwise intimidating and punishing them.

In a press release, Carrillo said:

I learned never to ask any questions about why my pay was so low or why we were treated so badly because anyone who speaks up will lose his job and have nothing for his family.