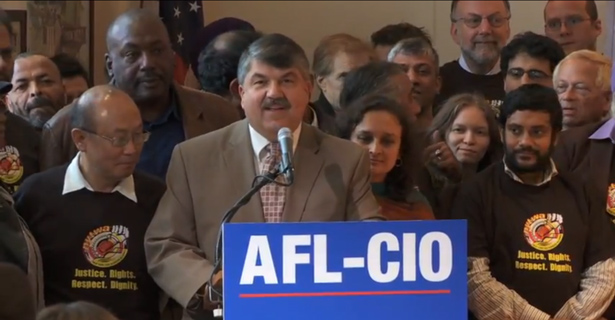 WASHINGTON, D.C.—Last week, the National Taxi Workers Alliance became the first nontraditional labor group to join the AFL-CIO as an affiliate since the 1960s, when the United Farm Workers were admitted to the labor union federation. The alliance isn't a union; since cab drivers often work as independent contractors and rarely share common employers, they legally cannot organize and bargain collectively.

The admittance of the NTWA, which formally occurred last Thursday at a panel event hosted by AFL-CIO President Richard Trumka and Labor Secretary Hilda Solis, shows the AFL-CIO’s commitment to pursuing irregular channels to organize workers and form community alliances. More and more workers find themselves employed as independent contractors and in employment relationships that do not allow for collectively bargaining. Organizing these workers will be crucial to rebuilding worker power.

But how do you build a financially sustainable and membership-driven labor organization when in some cases it’s impossible to organize workers lacking collective bargaining rights?

“We all carry around the mental mood of the workplace, where we have an employer and a worker. And our laws respond to that. But that no longer corresponds to reality,” panelist David Weil of Boston University said Thursday at "The Future of Work and New Ways to Build Power," held in Washington D.C.

More than 10 million U.S. workers are currently classified as independent contractors and not allowed to organize legally. In addition, several million more work in agriculture or domestic work—sectors that are forbidden to organize under the National Labor Relations Act. And millions of restaurants experience such high turnover that it is nearly impossible for workers to form a union. And of couse, employers' union-busting efforts also make it difficult to for workers to organize.

The only way organized labor may be able to fight for these workers is by engaging in nontraditional labor campaigns that do not seek traditional collective bargaining arrangements at their heart. Winning this kind of non-traditional community-labor campaigns will not only help labor advocate for these workers, but could potentially strengthen labor’s power through building community alliances and organizing workers that were previously excluded.

Some in the labor movement sees the New York taxi drivers' 15-year effort to win pay increases and improve working conditions as an example of how the labor movement can fight for workers in industries traditionally difficult to organize.

While organizing workers outside of collective bargaining units can bring about real change for workers, it can be difficult to financially sustain such organizations since collective bargaining agreements do not exist that make it easy for unions to collect dues automatically through paychecks. A large part of the funding for many of these nontraditional labor groups comes from others unions and large foundations.

The inability to self-fund workers' rights organization can lead to significant instability when outside groups decide to stop giving money. Outside funding from foundations and unions can be problematic as the funding is often dictated by the ability and desire of those outside groups and not necessarily by people in the group trying to improve their working conditions.

“When people get most of their money from the outside, it can create inertia,” Bhairavi Desai, NTWA's executive director, said Thursday. The organization gets 80 percent of its funding from internal member dues collected individually one by one from members through an elaborate system of union stewards.

“If you don’t need dues, you don’t work too hard because getting people to give dues voluntarily is a tough thing to do. When your organization is driven internally, you are much more focused on meeting the needs of the members and making sure you work hard for that dues money.”