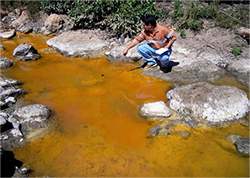 Despite being closed for a decade, the Commerce Group’s mine along the San Sebastian River has continued to produce cyanide and sulfur, according to local residents.   (Photo from The Share Foundation)

Company challenges country's decision to close mine due to pollution

For working people, talk of free trade agreements tends to trigger fear of being pitted against workers in low-wage nations—and being laid off.

But another critical dimension of free trade agreements and the race to the bottom has just cropped up in Milwaukee. A multinational company named Commerce Group based in the city is seeking to use the Central American Free Trade Agreement to overturn El Salvador’s efforts to block pollution from its gold mine. Commerce Group wants to win $100 million from the government of that poverty-stricken nation, which has blocked the company from re-opening the mine.

The power play illustrates the essence of corporate globalization, which is to use capital's mobility to evade the constraints of democracy at the national level and establish rules that guarantee global corporate supremacy. Trade agreements like NAFTA, CAFTA, and the World Trade Organization have effectively given corporations the power to set rules and ignore laws on product safety and the environment, allowing them to override democratically enacted laws and even win damages for lost profits through decisions by remote and secretive unelected panels.

Under the “dispute resolution” provisions of free trade agreements, a corporation can contend that a regulation constitutes a barrier to trade, and then can sue a nation for lost profits.

The issue is decided not in an open international court, but by a secret international “dispute resolution panel” composed of unnamed government officials and corporate officials. While their deliberations are conducted in secret and their documents are permanently sealed, their decision is final, as Thom Hartmann explains in his valuable book, Unequal Protection: the Rise of Corporate Dominance and the Theft of Human Rights.

This provision in CAFTA allows the Commerce Group to challenge the decision by the government of El Salvador to shut down the company's mine because of severe pollution, which has resulted in a high rate of cancer and kidney disease, according to local residents and government officials. Operation of the mine stopped in 2001, but the Commerce Group gained a permit in 2004 to study the possibility of re-opening the mine, only to have it revoked by the government in 2007.

The Commerce Group’s mine along the San Sebastian River has continued to produce cyanide and sulphur although closed for a decade, Salvadoran attorney Kenia Margarita Ortez Alvarezt told In These Times through an interpreter.

“Nobody drinks the water, but the horses and cows drink from the river, so it inevitably winds up in our bodies,” she explained. “In the summer, it is dusty and the people wind up breathing in the contaminated soil, and they suffer as a result.

“The wells are also contaminated, so we’re trying to build a cistern to provide fresh water," she said.

Ortez Alvarez had traveled to Milwaukee to meet with Commerce Group officials that morning and present a letter from community residents with three requests. “First, the community wants to get the title to the mine so that mining is permanently ended,” she said. Second, the community wants the Commerce Group to assist in assessing the actual level of danger posed by ongoing leaching of contaminants from the mine.

Finally, the community seeks the help of the corporation in reclaiming the river and surrounding land. But company official Jeffrey Machulak dismissed the community’s contentions and request for help. He claimed that they hadn’t worked the mine for years, and that pollution must be coming from another source.

Machulak also vowed to press ahead with legal challenges, including the CAFTA dispute resolution process.

A WARNING TO CHIPPEWA TRIBE

But for Ortez Alvarez, the long trip to Wisconsin was still worthwhile. She got a chance to meet with a local chapter of Engineers Without Borders, which is eager to assist her community in stopping contaminants and finding fresh water.

Further, Ortez Alvarez was about to embark on a trip to the Bad River reservation of the Chippewa Indian tribe, who are alarmed by plans for a massive iron ore mine that is being fervently promoted by the Gogebic Taconite Mining Company and Governor Scott Walker as a major job-producing project. The Chippewa are concerned that the giant $1.5 billion mine may harm the Bad River, while Republican legislators are trying to rush through the review process needed for such an enormous project within 300 days, as opposed to the two to four years normally required.

Ortez Alvarez’s frank account of her dealings with the Commerce Group was not likely to have generated much support among the Bad River Chippewa for a new mine near their long-treasured river.