Shutting It All Down: The Power of General Strikes in U.S. History 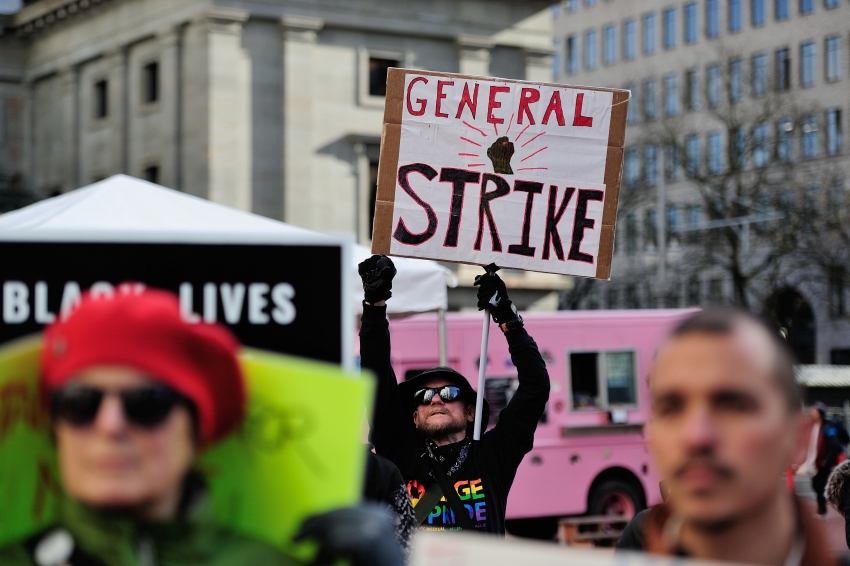 The general strike is not the end of the road but rather one step on the path to taking back our country.   (Photo by Alex Milan Tracy/Anadolu Agency/Getty Images)

Incredibly threatening to those in power, they rarely succeed. But they do build solidarity.

General strikes are rare in American social movements, because they are difficult to coordinate. On the other hand, few actions offer a more direct challenge to those in power. What can today's protesters learn from their activist ancestors to help participants draw strength? How have general strikes affected long-term labor and social movements?

The Pacific Northwest in the early 20th century was a center of radicalism. Horrible working conditions in the timber industry, already radicalized immigrants from Scandinavia, activist dockworkers and the popularity of the Industrial Workers of the World among the region’s thousands of transient workers made Seattle a fertile center of radical thought that even influenced labor organizations affiliated with the traditionally moderate American Federation of Labor (AFL).

The strike began with shipyard workers but was quickly joined by workers around the city. By February 6, over 60,000 workers were on the streets where they remained for four days. In an atmosphere fearful of radicalism after the Bolshevik Revolution, conservatives around the nation declared the strike the first step toward revolution.

Seattle mayor Ole Hanson took the lead in crushing the strike ordering the National Guard to take control of the city’s light company. Fearing long-term fallout, national AFL leaders denounced the strike and it quickly fell apart. After its defeat, the labor movement in Seattle fell apart, a victim of both internal fighting and the vicious Red Scare that followed World War I.

The Oakland general strike came out of the massive changes to the Bay Area during World War II. Hundreds of thousands of Americans moved to San Francisco, Oakland, Richmond, and other cities to work in wartime industries. The Congress of Industrial Organizations (CIO) had achieved major successes in organizing American workers during the late 1930s. Often using communist organizers, the CIO built on the militancy of American labor to become a powerful force in opposition to both the more traditional AFL and conservative business interests.

During World War II, the AFL and CIO turned their energies toward defeating the fascist menace of Germany and Japan. The administration of Franklin Roosevelt, wanting to avoid strikes that would undermine wartime production, brought both the AFL and CIO into wartime planning. But while consumer prices rose during the war, wages did not. The motivated and radicalized workers wanted to strike, but their leaders and the federal government urged them to work through it.

When the war ended however, the country was overtaken by a wave of strikes. In 1946, 4.5 million workers went on strike throughout the United States, the greatest number of strikers in one year in American history. Wages did not keep up with rapidly rising prices and higher wages were the core demand of almost all the strikers.

The situation in Oakland was especially volatile because of the city’s Retail Merchants Association, a powerful and deeply anti-union business organization. These department stores owners employed mostly women, who they believed would accept low wages. The Department and Specialty Store Employees Union Local 1265 organized workers at these downtown stores. Early in 1946, they won victories at smaller stores and decided to take on the biggest retailers, Kahn’s and Hastings. A month-long strike ensued in the late fall of 1946. Beginning mere blocks from Occupy Oakland’s encampment, this turned into one of the biggest challenges to corporate America in the postwar years.

Although the CIO had the more radical agenda, it was actually the AFL who decided to call for a general strike on December 2, 1946 in support of the striking department store workers. AFL workers around Oakland walked off their jobs—bus drivers, teamsters, sailors, machinists, cannery workers, railroad porters, waiters, waitresses, cooks. For over two days, Oakland shut down. Over 100,000 workers participated in the strike.

The strikers controlled Oakland. All businesses except for pharmacies and food markets shut down. Bars could stay open but could only serve beer and had to put their juke boxes outside and allow for their free use. Couples literally danced in the streets. Recently returned war veterans created squadrons to prepare for battle. Union leadership took a back seat to rank and file actions.

Although it is often spun in Oakland legend that the general strike was a successful action, it really wasn’t. A majority of workers wanted to continue striking and CIO unions considered joining in support, but the strike fell apart because of a single corrupt labor leader. Dave Beck, the head of the Teamsters and Jimmy Hoffa’s mentor, forced a compromise when he pulled his powerful union off the lines and endorsed a moderate settlement that accomplished almost nothing and quite literally did not address the department store workers concerns at all. While the still agitated workers managed to elect several labor representatives to the city council, the entire apparatus of the city used the general strike to attack all labor. The police, the city government, and the Oakland Tribune combined to resist not only the unionization of the department stores, but all labor in Oakland.

While Oakland remained a strong union city after this, the strikes of 1946 around the nation and especially the Oakland General Strike led to the Taft-Hartley Act of 1947. Taft-Hartley was an open attack on the labor movement, limiting labor’s ability to strike, banning sympathy strikes (which could make it legally difficult for today’s unions to support Occupy Oakland’s general strike), and allow individual states to pass so-called “right to work” laws, meaning that just because there is a union at your workplace doesn’t mean you have to join it.

Soon after, the McCarthy era began and radical unionism of any kind became suspicious, with the CIO kicking the communist organizers and entire communist-led unions out of the federation, turning its back on its radical history.

If there is one lesson to take from these general strikes, it’s that they are extremely threatening to those in power. If successful, they show that the 1% have lost the control they so ardently seek. They will react with ferocity against the organizers, laying bare structural and legal inequalities in this nation. Neither strike was successful, but we remember them as moments of incredible worker solidarity when it seemed massive changes were about to happen. They need to be seen as part of the larger struggles of working people to achieve basic rights, decent wages, and safe living conditions in this country.

Whether a general strike succeeds or not is less important than the public stand it takes against the exploitation of working-class people. The general strike is not the end of the road but rather one step on the path to taking back our country.

Finally, I want to encourage everyone who identifies as progressive to deeply read labor history and the history of social movements. Knowing about your ancestors is great, but the past offers a more direct lesson: understanding how various tactics and strategies have worked in the past, and how they can work in the present.

Erik Loomis is an assistant professor of history at the University of Rhode Island.