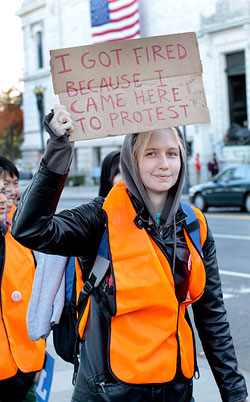 A protester at the Keystone XL Pipeline Protest outside the White House in Washington, D.C. on November 6, 2011.   (Photo: Emma Cassidy at TarSandsAction on Flickr, Creative Commons license.)

Thousands gathered near the White House on Sunday to say no to the Keystone oil pipeline. The human chain the protesters formed symbolized unity among environmentalists, youth, indigenous groups and other communities, all calling for decisive political action against climate change and fossil fuels.

But the emergent coalition has encountered fissures between environmental and economic goals. Pipeline boosters have controversially claimed that some 20,000 jobs are at stake in the project, which would channel notoriously dirty tar sands oil from Alberta to Texas. Activists have challenged and debunked the fuzzy math surrounding the projections of new jobs and “energy security,” and say environmental destruction shouldn’t trump narrow economic arguments, anyway. But tell that to struggling construction workers and others frustrated at Washington’s failure to alleviate the jobs crisis--some of the same folks you might find nearby at an Occupy DC rally.

Though environmentalists have united in broad opposition to Keystone XL, the project reveals tensions on labor issues, which illustrate the polarity between two visions of economic development. As we’ve reported before, several unions support Keystone XL as a possible source of jobs. The International Brotherhood of Teamsters and the Laborers’ International Union of North America are already gunning for contracts to help build the pipeline, while other unions have remained neutral. (For the company behind the project, TransCanada, peddling the job-genie rhetoric helps paper over the profit motives driving its extensive lobbying efforts and apparent ties to the infamous Koch dynasty. The State Department is now planning an inquiry into how the pipeline permit process was handled.)

The liberal protesters — in town to mark the 10th anniversary of the Afghanistan war — were mostly silent, but one shirtless dreadlocked fellow crashed the union rally. “These (oil business) people will poison you and steal your money!” he shouted.

He was quickly surrounded by union members who shouted “Jobs! Jobs!” drowning him out.

Yet opponents point to research that drowns out the job-creation argument, showing that  the project would likely generate just a few thousand temporary jobs--and more importantly, that the deep environmental costs would offset any potential development benefits. The Washington Post exposed shady email exchanges indicating ties between State Department officials and a TransCanada lobbyist, adding to the controversy surrounding the choice to use a TransCanada-linked consulting firm “to help prepare the federal environmental assessment and run the agency’s public hearings.”

But beyond the dubious statistics, the central question the pipeline raises for labor and environmental movements is, what kind of relationship do people ultimately want to see between the environment and the economy--harmony or antagonism?

Countering the union support for Keystone jobs are green labor advocates who try to fuse economic justice and climate change issues. The Transport Workers Union and Amalgamated Transit Union have both opposed the pipeline. Canada's Communications, Energy and Paperworkers Union, which represents oil and gas industry workers, has criticized Keystone XL as a double-threat to both jobs and the environment.

Fred Wilson of the CEP told In These Times that many Canadian unions oppose the pipeline for the simple reason that it could allow fossil fuel industries to shuttle jobs southward from Canada into the United States. But more broadly, he stressed, the union’s vision for development--shared by many of the Canadian groups that have opposed Keystone (including union workers)--is not about ceaseless resource exploitation but rather striving for an energy system built to last.

It's not just about where the upgrading and the refining takes place. It's a simple kind of equation of environmentalism that when you have a sustainability issue, the best thing to do is to do more with less and to go up the value chain. And that's been our approach in Canada. We think that the tar sands are expanding too fast, it's unsustainable... this just isn't sustainable from any number of measures, in particular considering greenhouse gas emissions.

Still, the most immediate sustainability issue that many working-class families confront today is putting food on the table, not reducing carbon emissions. And the reluctance of many unions to oppose the pipeline on environmental grounds suggests that the economic crisis has been weakening labor’s recent efforts to bridge bread and butter with environmental ideals.

A recent paper by the Labor Network for Sustainability acknowledges that although unions have begun to incorporate politically popular “green jobs” targets in their agendas, progressive labor leaders have to balance competing pressures to “represent the immediate interests of existing members, some of whom may face job losses in the transition to a low carbon economy, while keeping in mind the longer term social and ecological concerns.”

In a joint statement with U.S. and Canadian unions, the Network recently issued an appeal to the labor movement to recognize what’s truly at stake in the pipeline battle:

We need jobs — but not jobs based on dirty energy and Tar Sands oil. Keystone XL will benefit the big oil corporations like Koch Industries and Valero that are determined to destroy the labor movement.

We join with those in labor who call for a Green New Deal to create jobs by way of major investments in public mass transit, electrical grid modernization, scaling up renewable sources of power, energy conservation, ambitious fuel- efficiency programs, and sustainable alternative fuels.

The activists who linked themselves together in opposition to Keystone on Sunday paralleled the inclusive populism of the Occupy movements. Yet the political showdown threatens to draw a deceptive dividing line through the 99%--unless working people realize that trading tomorrow’s skies for today’s paycheck is a bad deal for the whole planet.