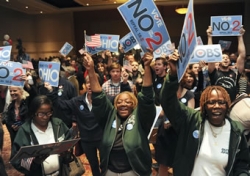 “This vote is a lightning bolt of hope across Ohio and Wisconsin and everywhere right-wing governors are trying to take away the rights of workers,” Wisconsin AFL Secretary-Treasurer Stephanie Bloomingdale declared last night at a victory party in Columbus, Ohio, celebrating the 61-39 percent vote in favor of repealing Gov. John Kasich’s anti-union law.

The law, passed earlier this year by a GOP-dominated legislature and known as SB5, would have effectively eliminated the right to union representation for public workers in Ohio.

Kasich’s law, now null and void, was similar to the one that Wisconsin Gov. Scott Walker and his Republican allies rammed through the Wisconsin State Legislature earlier this year with little regard for democratic niceties. But Ohio's bill went even further than Walker’s, taking away the union rights of police officers and firefighters.

The inclusion of the police and firefighters strengthened repeal supporters' efforts, as TV ads showed firefighters how the law would prevent them from negotiating over adequate staffing, training and equipment to serve the public.

Bloomingdale stressed that the repeal of SB5 was a momentous victory for labor in Ohio and across the nation. “The mood is very good, people are really enthused, seeing this as a pivot point,” she said in a phone interview.” It’s a hairpin turn for labor, symbolizing a revival of American labor.

The Ohio effort drew 17,000 volunteers actively working for labor's cause.

THE MEANING FOR WISCONSIN

The Ohio victory has a special meaning for Wisconsin unionists like Bloomingdale, who spent the last four days in Ohio along with State President Phil Neuenfeldt working door-to-door to urge repeal of SB5. “This tells Walker that he made a huge mistake when he attacks workers, because the middle class will fight back. We can’t do a referendum in Wisconsin, but we can recall Scott Walker.“

Beginning on November 15, the AFL-CIO and coalition partners will begin seeking 540,000 signatures necessary to mandate a recall election for Walker.

The Ohio result is another indicator of the minority support for laws like Walker’s law aimed at crippling public-sector unionism in Wisconsin.

Last night's result was almost identical to national polling  by the New York Times/CBS News, which concluded, "Americans oppose weakening the bargaining rights of public employee unions by a margin of nearly two to one: 60 percent to 33 percent." A Wisconsin poll by Public Policy Polling  showed a 65% level of opposition to Walker’s bill. Two of the Republican state senators who voted for the bill were defeated in recall elections last summer.

"This showed the power of the people," said State Rep. Betty Sutton on The Ed [Schultz) Show on MSNBC. “The 1% control a lot of wealth and power and influence, but this shows they only control 1% of the vote,” she joyfully exclaimed.

NAACP President Benjamin Jealous, who was in Ohio actively campaigning for the repeal of the anti-union bill, hailed the union movement’s triumph during an interview with Rachel Maddow on her MSNBC Show. The stakes were high for all workers were high in Ohio, but especially for African Americans, as about 20 percent of blacks are employed by the public sector.

Jealous warned that last night’s victory would be impossible a year from now because of a restrictive new Ohio voter ID law would be in effect, and that requirement “amounts to nothing more than a modern poll tax,” a ploy used in the South to prevent poor blacks from voting. Those without a government-issued photo IDs, which in most cases means a driver’s license, would be blocked from voting. Among those who would be affected are larger numbers of African-America, Latinos, the poor, the elderly, and college students, all primarily Democratic constituencies. (See here, here, and here for more on new voter ID laws.)

In Wisconsin, a highly restrictive new voter ID rule will be in effect for the likely recall effort. Common Cause of Wisconsin State Director Jay Heck described it as “the most restrictive, blatantly partisan and ill-conceived voter identification legislation in the nation.” The League of Women Voters has filed a lawsuit against the new voter ID law.

In her door-to-door conversations, Bloomingdale came across many small-town, conservative people who see labor rights as essential to America

"A lot of people said things like, ‘I believe that worker rights are a fundamental, that they shouldn’t be taken away." Many said that they were Republican voters, but they said 'He’s [Gov.  Kasich] going too far when he takes away a worker’s right to be in a union." It’s un-American. It’s not the way to balance the budget."

One guy was a retired police office, and he said, "Union rights are part of the red, white, and blue."

Bloomingdale was heartened by the coalition that converged to repeal SB5, including the NAACP, the AFL-CIO, independent unions like the United Electrical Radio and Machine Workers and the emerging Occupy movement.

“It’s nice to win a big one,“ remarked Staughton Lynd, the legendary Ohio-based activist, author and labor attorney. “A of people have gone a long time without a victory,” noting the many defeats labor has suffered over the past three decades.” For example, nearby Youngstown has lost thousands of high-paying jobs in steel mills shut down by US Steel and other firms.

(Lynd was deeply involved in a creative and militant—but ultimately unsuccessful— campaign to shift ownership of Youngstown steel mills, which US Steel was intent on closing, into the hands of workers and the community, as discussed in his book The Fight Against Shutdowns.)

“But this election was a solid result, a resounding defeat for Kasich,” he told In These Times. “I would certainly hope it will draw out union members to vote in 2012."

Lynd is convinced that both labor and the Occupy movement need to establish broader bases at the local level so that they can educate and mobilize ever-broader sections of the population against the power of the 1%. He chuckled as he mused about the way that the 1% vs. 99% framing of the Occupy movement causes people to re-think their place in society. “It’s interesting—it puts white correctional officers and black prisoners on the same side,” in reference to the privately-run “super-max” prison where Lynd has served as an attorney to fight for better conditions.

The combination of the repeal victory and the influence of the Occupy movement on popular awareness may add momentum to labor’s efforts to re-shape the nation’s economic and create a genuinely democratic political system, he said.

It remains to be seen how much the Ohio repeal vote will deepen Walker’s wounds. While Walker has earned disapproval ratings of 54 percent—slightly higher Kasich’s 53 percent, the governor has managed to keep Republican-identified voters unified behind him, unlike Kasich.

Public Policy Polling showed recently Walker with a 90 percent approval rating among Republicans, compared to just 63 percent for Kasich. However, looming over Walker is an ongoing FBI investigation of his 2010 gubernatorial campaign; several formal aides have accepted immunity from prosecution.

The petition-gathering for the recall will start next Tuesday, with an event near Gov. Walker’s home in a Milwaukee suburb.