Housekeepers Charge Hyatt Fired Them for Taking Down Their Own Photos 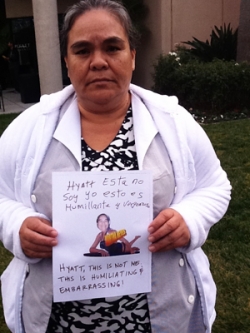 Becoming a pin-up without your permission: another downside of workplace autocracy

Passing through the halls one day in September, Martha Reyes stopped to see why a group of her Hyatt co-workers stood laughing in front of a bulletin board. Looking closer, she saw photos of her head, and those of other housekeeping employees, pasted onto bodies in swimsuits. “I got really angry,” says Reyes, seeing her face on a figure that looked “almost naked, and a very different body that wasn’t mine. I felt very humiliated and embarrassed.” Martha’s sister Lorena was also included in the beach-themed display, which Hyatt management had posted over the weekend as part of Housekeeping Appreciation Week.

Martha Reyes took down her picture and her sister’s. A month later, alleging they spent too long on their lunch break, the Hyatt Regency Santa Clara fired both of them.

The sisters charge that the non-union hotel was retaliating against them over the bulletin board. Hotel workers’ union UNITE HERE (full disclosure: my former employer) is championing their cause. On November 18, the union organized a delegation of hotel workers and community leaders that joined the Reyes sisters in delivering a copy of an Equal Employment Opportunity Commission (EEOC) complaint to the hotel, followed by picketing outside. UNITE HERE is in a national fight with Hyatt over organizing rights at non-union hotels.

As In These Times has reported, UNITE HERE has drawn national attention to 100 non-union Hyatt workers in Boston who were abruptly replaced by a staffing company, and partnered with LGBT groups in boycotting a Hyatt hotel whose owner’s donation helped put repeal of equal marriage rights on the ballot. In September, union Hyatt workers in four cities staged a one-week strike demanding the right to do future solidarity actions while under contract. In February, the Reyes sisters and other union committee members called for a customer boycott of the Hyatt Regency Santa Clara over management’s refusal to agree to a fair organizing process.

Hyatt maintains that the Reyes’ firings were routine, and that the union is taking an opportunistic swipe at their brand. The sisters’ attorney, Adam Zapala, says that conversations with Hyatt Regency Santa Clara employees have turned up no one else who has been terminated for long lunches. He notes that many housekeepers there, faced with excessive workloads, work through their breaks and then take a longer lunch.

Hyatt insists that the posted photos were designed to celebrate housekeepers, not to make fun of them. (The company did not respond to a request for comment.) That could well be true – managers may have put up the display without ever imagining that some employees would be humiliated, rather than tickled, to see their faces juxtaposed on shapely people in bikinis.

That possibility in itself illustrates the downsides of autocracy. The Reyes sisters say the plans for Housekeeping Appreciation Week, like most decisions at the Hyatt Regency, were made with no input – let alone consent – from hourly employees. “I’m a big woman,” says Lorena Reyes, “and the photo they used isn’t my body…I never wear bikinis…those pictures made us look like clowns.” (Both sisters were interviewed in Spanish.)

Though the posting was in an employee area, its location was visible to passing employees from all departments, outside vendors, and the occasional guest. It’s difficult to know how many other employees at the non-union hotel had similar feelings but chose to stay silent rather than take the risks at-will employees face by getting on the wrong side of management. If the pin-ups themselves seem commonplace, that’s striking as well: one of 100 daily collisions between values of autonomy and the acceptance of subordination as a cost of employment.

The indignity the Reyes sisters faced – seeing your image used in a way that horrifies you, by someone who could fire you – is a stark reminder that workplace relationships are power relationships.  Lest we think that was obvious, this month noted non-feminist Katie Roiphe took to the New York Times to call for more “risqué remarks” at work, with nary a mention of whether those comments were more likely to come from subordinates towards “superiors,” or the other way around.  When’s the last time you saw employees pin up a photo of their boss’ head on a swimsuit model at work?

And as the Reyes’ sisters have experienced, the downsides of management autocracy don’t disappear at the end of your shift. Both sisters carried their shame and anger home with them at night. “I still feel really humiliated,” says Martha Reyes. Lorena Reyes avoided showing the image to her family out of embarrassment. They saw it for the first time when it appeared in local news.

The Hyatt Regency Santa Clara also offers a reminder that labor rights and women’s rights aren’t naturally severable. Their connection is especially obvious in housekeeping, where a usually invisible, sometimes sexualized workforce does dangerous but undervalued work. UNITE HERE members in several cities have negotiated for and won the option for employees to wear pants rather than skirts. After a UNITE HERE housekeeper charged former IMF head Dominique Strauss-Kahn with rape, union members around the country spoke out about sexual harassment and assault by hotel guests.

“We want to make sure Hyatt does the right thing,” says Lorena Reyes, “and that they don’t humiliate women again like they did to us.”