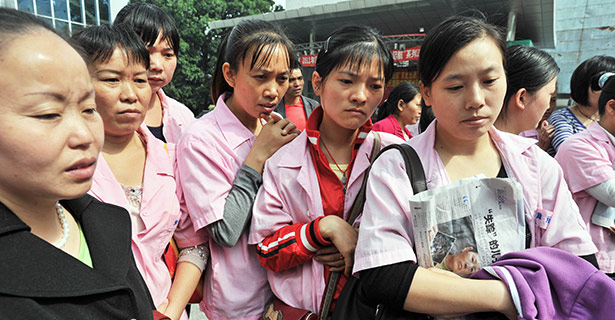 If you believe the hype about living in the “Pacific Century,” then the new millennium is bound to be a pretty rowdy one.

A few days ago about 1,000 workers in the heart of China’s manufacturing belt walked off the job at the Taiwan-owned Jingmo Electronics Corporation, saying they were tired of being cheated on overtime pay. Around the same time in the Guangdong boomtown known as Dongguan, thousands of shoe factory workers protested over overtime pay and marched with their grievances to a local government office.

This may seem like a reprise of the powerful 2010 strike wave that rippled through big-name manufacturing plants, including Toyota and Honda. Last year, workers' newfound militancy yielded some significant gains—mainly in the form of pay hikes and other concessions. But whether they’ll be able to wrest a fairer paycheck from the management this time around hinges not so much on workers’ will, as on the global economic house of cards that’s getting rocked by countless factors that the labor force can’t control. Though concessions could be coming down the pipeline for some workers, in the backdrop is an alarming slowdown in China’s exports, which drive the country’s development and stuff consumers in rich countries with an endless stream of cheap goods.

November brought news of a a sharp drop in exports to Europe, coinciding with a burgeoning financial crisis in the Eurozone, as well as premonitions that China’s housing market might soon start to go pop.

According to the watchdog organization China Labour Bulletin, the state has worked with the companies to squelch protests, and even management staff is feeling the pain:

Photographs posted online showed large numbers of police on the street and bloodied workers who claimed to have been beaten by the police. Several other workers had reportedly been detained.

The strike at the Yue Cheng factory in Huang Jiang township was triggered by the dismissal of 18 managers in late October. The company claimed they had been dismissed because of the factory’s decreasing orders and sluggish business. But one of the managers told China Business News that the real reason behind their dismissal was that the factory planned to shift production to Jiangxi in a bid to combat rising costs in the Pearl River Delta.

“We’ve been loyal workers for over a decade in this factory. But now the factory decided to fire us on the sole excuse of bad business operations and cost pressures. How can they be so irresponsible?” one dismissed manager wrote on his internet post.

2010's summer of unrest saw workers’ aspirations catching up to their demands for workplace justice, and both bosses and local governments seemed willing to placate workers with pay raises and minimum-wage hikes. But the promise of continued growth and rising standards of living may be finally petering out.

Last year the economy was booming and employers clearly could afford to give workers substantial pay raises. That is no longer the case and many businesses are struggling. There is less profit to go around and workers demands now seem more tailored to trying to hang on to what meager benefits they did win in last few years rather than push for substantial pay increases. But even these modest demands are meeting resistance from employers and often workers will only begrudgingly agree to go back to work on the promise to fully resolve grievances at a later date.

Now that's running up against sagging demand and factory relocations to cheaper and cheaper areas, either within China or to even poorer Asian countries. This means that the growing energy among organized workers lacks the momentum to brake the downward spiral. But according to Li Qiang of the advocacy group China Labor Watch, the power of collective consciousness still counts:

the difficult global economy undoubtedly impacts China's exporting market, decreasing the jobs and lowering the salary. These are some of the reasons why we see a rash of workers' unrest in China. But we think more importantly, the strike signals the workers' arising awareness of their rights and conception of empowering themselves. Tracing back to 10 years ago, the word "right" never came to the workers' minds, not even mentioning fighting for it. In retrospect, we can see that they are more organized and prepared now than ever before. The collectivity also helps the workers to get their voice heard.

That's inspiring to hear, but if China’s capitalist “miracle” is beginning its implosion (just as it has in America), sooner or later, bosses will calculate that it’s simply more profitable to ship off to Bangaldesh and other countries with a less regulated, more impoverished “business climate.”

There is, however, the potential for workers across Asia to do what their corporate counterparts have accomplished so skillfully—consolidating to the point that they wield power across borders. Campaigns that take a global approach to fair-wage standards and regulations, or champion a broad “social protection floor,” are just starting to ripen, as are cross-border organizing campaigns in North America.

For now, those embryonic efforts won’t reach the workers struggling in Shenzhen today. But if “rights” is becoming a new part of their vocabulary, then a redefinition of “power” and “democracy” shouldn't be too far off.