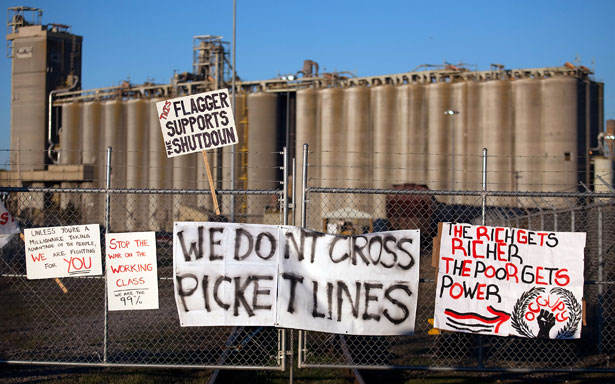 Signs are seen at the entrance of Port #5 on December 12, 2011 in Portland, Ore. Hundreds of Occupy Portland protesters effectively shut down two of the Port of Portland's busiest terminals on Monday, preventing about 200 longshore workers from going to work.   (Natalie Behring/Getty Images)

Yesterday, Occupy protesters attempted to shut down ports along the West Coast. In particular, the protesters targeted SSA Marine, a company owned in large part by Goldman Sachs, as a way of protesting both corporate greed and the working conditions of port truck drivers who are denied basic workers right by being classified as "independent contractors."

But while the Occupy movement declared solidarity with the port workers, including the truck drivers and members of the International Longshore and Warehouse Union (ILWU), the Longshoreman’s union did not vote to shut down the port.

But the decision by an outside group to shut down the ports and cause workers to lose a day’s pay without them first getting their consent raises serious questions about the Occupy movements willingness to bypass a labor union's own democractic decision making process.

In the past, the ILWU shut down West Coast ports to protest South African apartheid, stand up for farm workers’ rights and other causes. On May 1, 2008, the ILWU shut down ports for one day in order to protest the War in Iraq. Most recently, workers illegally shut down the all the ports in Longview, Wash., for 15 minutes, as I previously wrote about for In These Times.

But this week, the ILWU was against Occupy protesters' efforts to shut down the port, despite protesters claiming they were engaged in the struggle in part to show solidarity with ILWU members in Longview resisting the use of nonunion labor at the Port of Longview. In a statement to union members and affiliates on December 6, ILWU President Robert McEllarth said,

The ILWU has a long history of democracy. Part of that historic democracy is the hard-won right to chart our own course to victory. As the Occupy movement, which began in September 2011, sweeps this country, there is a real danger that forces will attempt to adopt our struggle as their own. Support is one thing, organization from outside groups, attempting to co-opt our struggle in order to advance a broader agenda is quite another and one that is destructive to our democratic process and jeopardizes our over two year struggle in Longview.

Outside groups claimed that the ILWU did not want to formally support the effort to shut down the port in part because they were afraid of a lawsuit for illegaly shutting down the port. Earlier this year, as my colleague Josh Eidelson reported for Working In These Times, the Pacific Maritime Association sued the ILWU when longshore workers in San Francisco and Oakland shut down their respective ports as part of a national day of “We Are One” actions in support of collective bargaining on April 4.

Many supporters of Occupy movement claimed that support among ILWU rank-and-file members was there, but that top leadership did not want to endorse in part because of legal problems and for other reasons.  In a Salon article entitled “Occupy vs. Big Labor,” writer Emily Loftis criticized the union’s decisions to support the port shutdown saying, “Just as the 1 percent now has to listen to the 99 percent, Big Labor has to listen to the rank and file. Dec. 12 marks a step in the evolution of the movement from a collection of improvised tent-villages to a national network of empowered, community-conscious problem-solvers.”

Stan Woods, an activist involved with the Transport Workers Solidarity Committee, told The Guardian that most rank-and-file workers support yesterday's action, despite their leadership not endorsing it. Woods said, “the ones I’ve spoken to are strongly in support of the Occupy Movement.”

Leaders within the ILWU, however, claim the portrayal of ILWU as a bureaucratic union representing labor’s 1% are overblown. The ILWU have a long history of taking dramatic action to support their own union members even when they break the law and risk the financial well-being of the union. (Currently, the union is facing $315,000 in fines for breaking a federal injunction by blocking grain trains from entering a non-union terminal at the Port of Longview. Workers in Vancouver, Canada and Tacoma, Wash., went on illegal wildcat strikes to protest police brutality that union members and supporters faced from police when they blocked the tracks.)

“I am proud to say that I am in a union where my President is out getting beat up by cops on the railroad tracks in Longview instead of sitting behind some desk like most union bureaucrats,” says ILWU Communications Director Craig Mierrelles.

Multiple ILWU labor leaders who spoke with In These Times claimed there was little awareness or support from rank and file for a shutdown of the ports on December 12th.

“Frankly, a lot of members are pretty confused about what’s going on, press is screwed up in ways of reporting stuff – most of these guys just get their news from television,” says Fred Pecker, president of ILWU Local 6 in San Francisco. “There are some members here that are supportive, but I doubt enough to be able to put it up for a vote. I got a local of 5,000 guys here. If these guys really want a port shutdown, they would have to work hard to build support among guys that range from left wingers to some very conservative Republicans.”

According to Pecker, when ILWU shut down the ports in 2008 in order to make a political statement about the War in Iraq, they had to work for months in order to build enough support among members to shut down the ports. Some Occupy protesters say that by taking their actions to shut down the ports without direct union consent, they are educating union members about the possibility of taking direct action. They claim that in the past, radical actions like factory sit-downs at first did not have support from many members, but were able to inspire more workers to support them once the actions were under way.

“The Occupy movement is simply taking from labor history,” Robbie Donohoe, an IBEW member told Labor Notes. “We’re making it safer for workers to challenge the boundaries of laws that were created to secure the reins of power firmly in the hands of the 1%.”

However, Cal Winslow, author of Labor’s Civil War in California: The NUHW Healthcare Workers’ Rebellion, about the struggle of rank and file health care workers to resist efforts by SEIU leadership to force them to take concessions, says that the Occupiers' port action this week reminds him of the heavy-handed tactics of union leaders like Andy Stern.

"Both Stern and Occupy demand that workers sacrifice their right and standards for the greater good—but neither offers them a choice nor an opinion on what exactly is the greater good. And the question of 'who decides' ... is irrelevant or perhaps involves merely an 'inconvenience,'” says Winslow. “In both cases there are real problems. If we are going to see a rebirth of the labor movement, it’s going to have to come workers doing things for themselves. It’s not something that can be imposed.”

As the Occupy Movement, which has prided itself on its internal horizontal democratic decision-making process, seeks to expand and enlist new allies, it will have to weigh how its actions affect other workers’ ability to take democratic action for themselves.