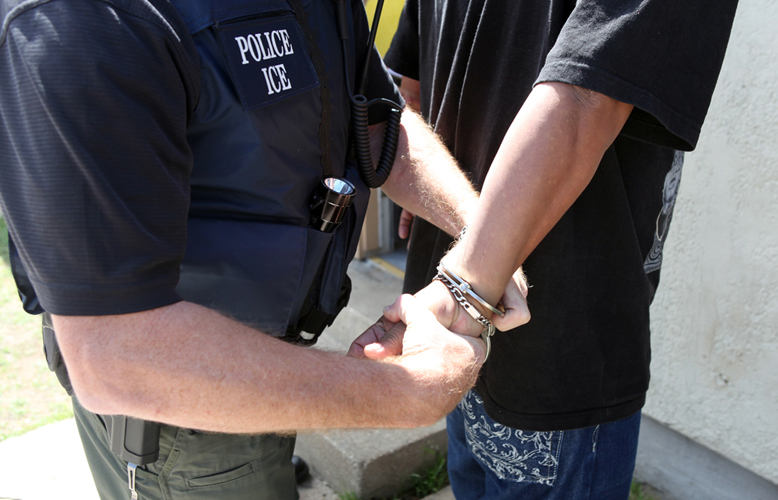 Trying to please all at once and disappointing everyone, the White House has long played a game of good-cop-bad-cop on immigration, promising reforms while clinging to some of the cruelest deportation policies.

Though the mainstream labor movement has not always placed itself at the forefront of immigrants’ struggles for equality, the AFL-CIO has recently spoken out in defense of undocumented workers and their communities. The AFl-CIO Executive Council has joined a chorus of groups opposing Secure Communities, a notorious Homeland Security program that promotes the sharing of information between local and federal law enforcement authorities about the legal status of immigrants arrested by local police.

The AFL-CIO stated that the program encourages racial profiling, and demanded that the White House “Immediately terminate the operation of Secure Communities” and bar it from jurisdictions known to practice “discriminatory policing.” The statement, signed by the AFL-CIO and National Immigration Forum, specifically cited Alabama’s brutal new anti-immigrant law, which is currently being challenged in court.

In the background lies the basic contradiction in Obama’s posturing on immigration. On one hand, the White House professes to be easing its approach, supposedly by focusing on deporting immigrants with criminal convictions. Recently the administration attempted to rein in the more extreme elements unleashed under its “enforcement-only” strategy. Responding to overwhelming evidence of discrimination and abuse, Washington recently cut off ties to the infamous Sherriff Joe Arpaio of Maricopa County, Arizona, whose virulent “lock’em up” campaigns against Latino immigrants were fed by Secure Communities and its sister enforcement program, 287(g), which encourages local-federal collaboration.

But Secure Communities remains a pillar of the immigration regime. Freshly leaked documents indicate that the administration considers S-Comm to be essentially “mandatory” in nature, despite widespread criticism from state and local governments as well as advocacy groups. There’s still controversy around whether localities can opt out of the program.

But labor is by no means of one mind on immigration policy. A recent New York Times article by Julia Preston suggests conflict inside Immigration and Customs Enforcement (ICE), as the National ICE Council, a union representing thousands of officers, has resisted participating in training for the reformed deportation policies:

in a new sign of the deep dissension over immigration, the union... has so far not allowed its members to participate in the training. Without the formal assent of the union, the administration’s strategy could be significantly slowed for months in labor negotiations.

Preston cites earlier congressional testimony by National ICE Council president Chris Crane, who bristled at the idea of softening deportation policies. Pivoting to anti-immigrant sentiments, Crane has also appeared on Fox News and the Lou Dobbs Show to contend that the administration’s policy shifts could prevent effective enforcement of the law.

However, Crane told In These Times in an email correspondence that the NYT's report of “dissension” was inaccurate. The delay was not caused by the union and has nothing to do with the policy, Crane said, but rather, with inadequate transparency and cooperation:

There is no standoff. DHS and ICE spent an extended period of time unilaterally developing both the Prosecutorial Discretion Memorandum and the associated training instead of working in partnership with the Union to jointly create a training program that would now be ready for implementation.  Ultimately it is the Agency's right to take that approach but it does dramatically slow down the process and forces the parties to follow the timelines of the negotiated agreement.

Crane acknowledged the union’s earlier criticisms of the administration’s deportation policies as poorly conceived and aimed at “satisfy[ing] immigrant advocacy groups.” But, he stressed, the current qualms were about the development process and quality of the training, not ideology.

Nonetheless, Crane argued, “Most of the policies put out by this Administration really are bad,” citing a lack of clarity around how much discretion agents could exercise when dealing with immigrants “in the field.” Although union members would seek to work with the administration to improve these practices, in Crane’s view, “ICE lacks effective leadership” under an “anti-union manager,” Director John Morton.

But from the perspective of immigrant rights’ advocates, the controversy around the training completely misses the point: the union conflict doesn’t really hinder a better deportation policy, and the supposed reforms do not truly improve the status quo. While ICE may be split internally on some issues, grassroots advocates for immigrant workers demand nothing short of a complete overhaul of the bureaucracy.

Laura Rivas of the National Network for Immigrant and Refugee Rights told In These Times she is less troubled by the ICE union’s political dilemma than by the social dilemma it represents:

While we understand the concerns of job security and having clarity of what the rules are, the bigger picture that we see is, here you have an entire sector, which they're a part of, whose job security relies on the mass and unjust incarceration and deportation of innocent people, of people who have longstanding ties in the U.S., and who have been criminalized for the past [twenty-five] years now under really, really outdated policies. That's really what's happening here.

While NNIRR has partnered with unions on some immigant-justice campaigns, Rivas said the politics of coalition-building are generally driven by the perceived interests of union members.

Throughout American labor’s history, attitudes toward immigration have fractured and wavered according to political and economic trends and organizing strategy. The political evolution of labor movements have often reflected the massive presence of immigrants in the workforce and by extension unions. Foreign-born workers have been alternately embraced as fellow workers and demonized as job-stealers--and sometimes, when it comes to the law-enforcement business, treated as problems to be fixed.

Today, immigration enforcement supports a major industry and government sector. The bureaucracy in turn serves the larger enterprise of simultaneously excluding and exploiting undocumented workers. Similarly, the prison industry employs legions of working-class people, many with robust labor unions, yet feeds off the systematic incarceration of the poor and disenfranchised.

As long as the 99-percent are divided among the people doing the enforcing and the people getting getting enforced upon, this awkward balance will stay in place, teetering on the wall between those who comply and those who don’t.