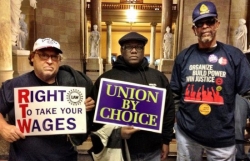 (Photo courtesy of Stand up for Hoosiers)

By Wednesday evening, after Indiana's House and Senate had passed RTW legislation, the state was poised to become the first industrial Midwestern state to ban closed "union shops," in which all employees are a member of the union that bargains for wages and benefits on their behalf. It would be the 23rd in the country to do so; most are in the south.

On Monday, the State Senate passed the the RTW bill 28-22, with 9 Republicans joining the 13 Democrats in opposition. On the House side, Wednesday evening an identical measure passed 55 to 44. (On Monday, all 60 Republicans voted down an amendment—backed by all 40 Democrats—calling for a statewide referendum on the right-to-work bill, based on results of a Peter Hart poll showing 69 percent of Hoosiers  lack information on the bill’s impact and 71 percent support a referendum to settle the issues.)

All that's left is for Gov. Mitch Daniels (R) to sign the bill into law, which he is likely to do before the Super Bowl in Indianapolis in early February.

Sen. Senate Minority Leader Vi Simpson stated: "Right to work is nothing more than a race to the bottom for the middle class of Indiana, and that, my friends, is not a race I care to win."

A year ago, Democrats stayed outside the state for 35 days to prevent a quorum, thus blocking RTW legislation. But since then, the Republicans have passed legislation subjecting legislators to fines of $1,000 per day for unauthorized absences of three days or more.

However, despite the Republicans’ constraints, labor still batted to block the legislation. For Indiana workers, the stakes are incredibly high. “Right-to-work” legislation encourages workers not to join unions even when they win a majority vote. After all, the Taft-Hartley Act passed in 1947 assures that nonmembers receive the same pay, benefits and protections as union members without paying any dues and—equally important—gaining favor in management’s eyes.

Careful screening of pro-union applicants assures an increasingly anti-union workforce, and heightens management’s leverage to weaken and finally eliminate the union. Pay in union shops is 16 percent higher in Indiana’s unionized workplaces compared to nonunion settings. Nationally, workers in the 22 current right-to-work states earn substantially less than in states where management is unable to manipulate and crush unions, with the differential estimated at $1,500 per year.

Gov. Mitch Daniels (R) and his GOP and corporate allies imagine an RTW law will instantly make Indiana a magnet for more businesses. But as Prof. Gordon Lafer insightfully points out, RTW laws have lost their allure when corporations can easily move to China or Mexico and pay a fraction of what they had been paying in South Carolina or Mississippi or Indiana.

No one in labor, however, expected Republicans to decide against ramming the RTW bill into the end zone ahead of the February 5 Super Bowl in Indianapolis. But Indiana’s working men and women tried to slow down the Republicans’ advance.

Gov. Daniels delivered the Republican response to President Obama’s State of the Union, assuring the national audience of the GOP’s sincere dedication to working families. But on MSNBC, the Indiana AFL-CIO aired an ad that features Daniels in 2006 promising Teamsters that he will not consider further changes to Indiana labor law, “certainly not a right-to-work law.”

The strong-arm tactics of Republican legislators and the effort to drive down wages with an RTW law—at a time of growing riches for the top 1%—are likely to face much harsher scrutiny from outside media outlets than from Indiana newspapers.

“The Republican and corporate backers of ‘right to work’ are deathly afraid about what Indianapolis will look like if labor and its allies protest around the Super Bowl,“ said the AFL-CIO’s Harris. “We’ considering some things that will be respectful and also shed light on what RTW will do to working families.”

The labor movement of Indiana is engaged in a desperate “goal-line stand,” to borrow a particularly fitting football metaphor, against a corporate team that vastly out-weighs them financially and politically. However, while Indiana labor has managed to wage a creative and prolonged struggle, there is some chance that the goal-line stand could be aided by the NAFL players themselves.

The NFL Players Association, one of the nation’s more effective and imaginative unions, has issued a strong statement of support. and NFLPA Director DeMaurice Smith wrote a powerful op-ed published in the Indianapolis Star, reminding the public that labor’s demands have promoted widespread social progress on every front from decent pay to healthcare to safe working conditions.

Smith also hinted to The Nation's Dave Zirin that the NFLPA might play a visible role in challenging the push for RTW:

...the idea of participating in a legal protest is something that we’ve done before. We’ll have to see what is going to go on when we’re there, but issues like this are incredibly important to us. If we can be in a position just to make sure that we raise the level of the debate to the point where it is a fair and balanced discussion about the issues, I think that is something that our players can help do.

Editor's note: This article was originally published on Tuesday Jan. 24.