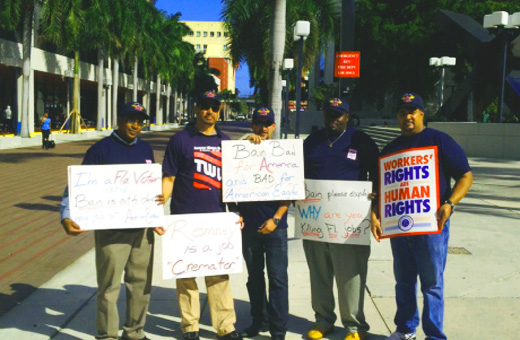 As Mitt Romney campaigns in today’s Florida presidential primary, airline workers have been following him with a message about one of his old company’s newest clients: Airline giant AMR, the parent company of American Airlines and American Eagle. AMR, which filed for bankruptcy in November, last week announced plans to retain the advice of Bain & Co., the consulting firm where Romney worked before co-founding private equity firm Bain Capital in 1985.

AMR’s retention of Bain (for consulting on its American Eagle subsidiary) came out the same week as news that AMR had contributed less than $7 million to its pension fund, out of a normally required $100 million, for the month of January. Days later, AMR increased its contribution. “I have a hard time sitting back,” says Little, “when the company is taking hard-earned money…to pay $525,00 a month to have this company come in and tell them how to cut heads.”

AMR did not respond to a request for comment, but a spokesperson for the company recently told the Wall Street Journal, “This is a complex process and we recognize that a successful reorganization requires the assistance of a variety of professionals with specialized expertise,” and described the cost of hiring Bain as “a usual and necessary part of the Chapter 11 process. We will be reviewing these costs carefully to ensure that they are monitored and managed appropriately.”

Romney’s record at Bain has become a lightning rod for attacks from Democrats and from his Republican primary opponents, including a half-hour TV ad paid for by billionaire Gingrich SuperPAC supporter Sheldon Adelson featuring workers who blame Bain Capital for the elimination of their jobs.

Before dropping out and endorsing Gingrich, Texas Governor Rick Perry decried Romney’s work at Bain as emblematic of “vulture capitalism.” While acknowledging that Bain Capital caused layoffs, Romney and his campaign have at various times credited his company with creating “thousands,” “tens of thousands,” or “over a hundred thousand” jobs.

Talking Points Memo recently obtained an e-mail from Bain & Co. to new hires emphasizing that Bain & Co. and Bain Capital "are completely separate entities."  In a post on its website, TWU acknowledges that the company Romney founded and the one AMR is retaining are "separate entities," but says "they have strong institutional relationships."

Romney formally retired from Bain Capital in 1999. As the New York Times reported last month, under his retirement deal he continues to receive a portion of Bain Capital profits. On a press call organized by the Democratic National Committee last week, former congressional Joint Committee on Taxation Chief of Staff Ed Kleinbard said that Romney’s 2010 tax returns show an “obligation to continue to provide services to Bain.”

As I reported last month, Little has criticized AMR’s bankruptcy filing as an unnecessary move by a company with $4 billion in the bank whose employees have already made enormous sacrifices. American Airlines was the only one of the major airlines not to file for bankruptcy following the post-9/11 decline in air travel.

Bankruptcy was averted following a 2003 concessions package which was only narrowly approved in a vote by TWU members. The AMR bankruptcy filing reportedly was ordered by the company’s board over the objections of then-CEO Gerard Arpey, whose resignation was announced the same day. It occurred just after TWU and AMR had reached tentative agreements on new contracts for two of its bargaining units, which were awaiting ratification; other contracts were long-expired and unresolved.

Last week, U.S. Bankruptcy Judge Sean Lane temporarily approved AMR’s proposal to retain Bain and 11 other firms for various firms of counsel, but withheld final approval. This followed a formal objection from TWU to Bain’s involvement, and (as reported by Bloomberg) a separate objection from a U.S. Justice Department trustee who questioned the need for a dozen firms and the potential for conflicts of interest.

Little calls paying for Bain “an abuse of the bankruptcy process.” TWU cites hourly fees of up to $1,100 for Bain staff working on the AMR bankruptcy. Little rejects the idea that Bain can find “efficiencies” for AMR, saying that if AMR’s in-house management “can’t tell what the efficiencies are, shame on them. They shouldn’t be operating the business.”

“If I’m getting rid of something, I don’t necessarily want to [pay to] make it brand new.”  AMR is set to make its comprehensive bankruptcy proposal to TWU’s negotiating committee tomorrow (Wednesday), and Little expects that plan to include freezing or eliminating pensions.

Following media reports of the earlier under-$7 million contribution, American Airlines sent a letter to employees apparently designed to reassure them. That letter drew a blistering response from the Pension Benefit Guaranty Corporation, the federal agency that helps secure failed pension plans.

“American Airlines is telling their workers and retirees not to worry, but they should,” PBGC Communications Director J. Jioni Palmer said in a press statement. PBGC warned that American’s “recent statements, through its lead bankruptcy counsel and in employee communications, have signaled the airline’s intent to dump its retirement obligations on the PBGC.”

The National Mediation Board, which mediates airline labor disputes under the Railway Labor Act, this month declared its intention to participate in the AMR bankruptcy process. Little expresses skepticism about NMB’s involvement, given that NMB already participated in the negotiation of TWU’s new tentative contract agreements.  He says NMB should treat those contracts as a baseline for the bankruptcy negotiations, but is likely to expect even greater concessions instead.

Those tentative agreements included replacing pensions with 401(K)s for future employees. Asked whether TWU is open to giving up pensions for future employees in its other bargaining units, Little says that decision will rest with the workers on its Negotiating Committee. Once AMR makes its proposal tomorrow, Little predicts a week of negotiations between TWU and the company to attempt to reach an agreement on a bankruptcy plan. If those negotiations fail, he expects AMR will petition the bankruptcy judge to abrogate existing contracts.

TWU has also begun collecting "American Jobs@American Airlines" pledge cards and reaching out to members of Congress in cities like Tulsa, Oklahoma, where AMR may propose closing facilities.

TWU employees picketed a Univision forum last Wednesday in Miami and Thursday’s debate in Jacksonville. Among the picketers was 16-year AMR employee Andrew Rangolin, a Florida fleet service clerk and Vice President of a TWU local.

“Bain is out to destroy my job at American Eagle,” said Rangolin. He said Romney is “going to profit from this,” and called on him to back out of its AMR contract, so that AMR can invest Bain’s fee in maintaining jobs instead. In an interview with The Street, a Romney spokesperson framed TWU’s protests as an arm of an Obama campaign “strategy to ‘kill Romney.’” TWU has not yet made a presidential endorsement.

Reporter Terry Maxon predicted Sunday in the Dallas Morning News that AMR’s proposal tomorrow will include replacing all pensions with a 401(k), outsourcing thousands of jobs, and requiring employees to pay more of the cost of their health insurance.  Maxon says those predictions were based on “conversations, management proposals in contract talks and what other airlines adopted” in their own bankruptcies.