Golden Toilet Does the Job in Chicago 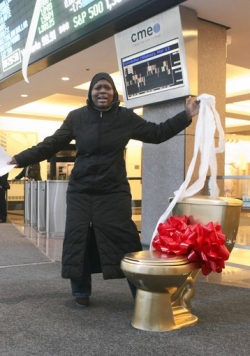 Nothing says unjust extravagance and squandering of taxpayer dollars like a golden toilet.

At least the attempted delivery of one had the desired effect in Chicago this week, with the company that owns the Chicago Board of Trade and Chicago Mercantile Exchange agreeing to forgo $15 million in Tax Increment Financing (TIF) taxpayer funds designated for "blighted areas."

In 2010 the Chicago City Council had approved giving the money to the CME Group for upscale renovations at the Mercantile Exchange and CBOT headquarters. To receive that and other tax breaks, the company had promised to keep 1,750 jobs and create 638 new jobs in Chicago.

Last week, the labor and community coalition Stand Up! Chicago had tried to deliver the golden toilet—adorned with a red ribbon—to CME Group executive chairman Terrence Duffy, who reportedly refused to accept it (see video below). Duffy noted that CME had never itself signed off on the TIF deal, and the money had not been delivered or spent.

In returning the TIF funds, the company cited other tax breaks, reportedly worth $77 million, that made the TIF funds unnecessary. According to media reports, the company had threatened to pull up stakes if incentives weren’t secured.

While we appreciate the ability to have applied for the TIF assistance several years ago, the tax law changes approved last year are much more important to CME Group’s ability to serve as a leading employer in Chicago...It is the company’s hope that formally declining the funds will allow the city to put them to use in incenting economic development in other parts of the city.

TIF awards sometimes include a commitment that the recipient must maintain a given number of jobs in the city for a set length of time. The Chicago City Council passed reforms on the TIF jobs front after the famous Republic Windows and Doors factory occupation in 2008, wherein the company failed to keep its job promises after using almost $10 million in TIF funds to build a new factory.

"I get strength from seeing so much injustice," Hueramo said as she shivered in a light coat on a 20-degree morning. Her husband, she added, has been struggling for more than two years to secure a stable job in construction. And her daughters, she said, often work until 1 a.m. to pay for college. "My daughters have been paying taxes since they were in their third year in high school. It upsets me that (politicians) are even taking my daughters' money to benefit businesses."

While TIF funds for the CME were approved during former Mayor Daley’s tenure, current Mayor Rahm Emanuel has also overseen the award of TIF money to large corporations, most notably $5-$6.5 million to Sara Lee Corporation as an incentive to bring the headquarters of its North American Meats company back to Chicago. The company will actually cut about half of that division's staff in moving from the Chicago suburbs back downtown, where it had been located until 2005. About 500 to 650 employees will end up at the new facility.

Some economic justice advocates and experts say TIFs can be a positive tool if used in the way they were intended—to "borrow" money from the tax base to spur investment where it is badly needed, creating jobs and hence increasing the tax base in the future.

But critics say the program is widely abused when the funds are used to reward politically-connected developers or businesspeople, or pursue public projects in neighborhoods that are well-served already.

The situation becomes murkier when TIFs are used to persuade major corporations to locate and create jobs in a given location. The economic effect could ultimately be beneficial, but at the same time many oppose the principle that companies can expect and demand handouts of taxpayer money to carry out operations which are essential to their existence and bring them profit.

TIFs, of course, also deplete the taxpayer funds available for schools, libraries, parks and the like, including the funds to staff public-sector jobs. The golden toilet protest likely carried extra weight since the city is in the process of laying off many public workers at libraries, the airport, mental health clinics and other locations.

A press release from Stand Up! Chicago released Monday said:

The golden toilet represented the luxurious bathroom, café, and fitness center renovations the TIF money was to finance for the highly profitable company... [T]his money could be put to use creating jobs, saving our schools and libraries, and providing essential services to vulnerable populations such as senior citizens and persons with mental illness.