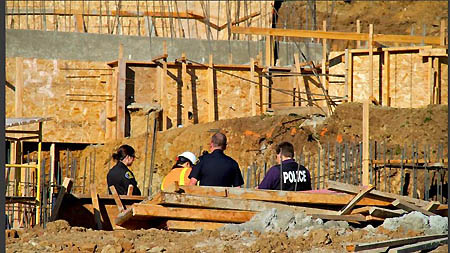 The construction site in which Raul Zapata was buried alive on January 28. (Photo courtesy Fire Associates of Santa Clara Valley)

SAN FRANCISCO—Raul Zapata never had a chance. When the carpenter and construction worker eased down the 12-foot trench he was working in on January 28, a chunk of earth shook loose, pushing him into a cement wall. More piles of dirt fell on top of him, suffocating him.

He didn’t know about the stop-work order issued three days earlier by the city of Milpitas, Calif., located near San Jose in the Bay Area. Neither did the foreman. Neither did his co-workers.

Inspectors issued the order after they determined that the foundation for the 5,800 square-foot home needed strengthening, and that a soil inspector needed to check out the site. Keyvan Irannejad, Milpitas' chief building official, told the Mercury News, "They just ignored our stop-work notice."

The area was so unstable Zapata’s body could not be pulled out until two days later. Zapata, a husband and father of three children, had been on the job just two weeks.

The builder, Richard Liu of Fremont, whose company is called U.S.-Sino Investment, has not commented on the accident. The California Division of Occupational Safety and Health has ordered the site shut down as they investigate.

On any given day, some 6.5 million people work at approximately 252,000 construction sites across the nation. According to the federal Occupational Safety and Health Administration, there are more than 1,000 construction site deaths each year. The fatal injury rate for the construction industry is higher than the national average in this category for all industries. The four leading causes of death are: falls, electrocution, being crushed or caught between objects, and being struck by moving machinery or objects.

It happens all over the country. In Cincinnati for example, workers at a casino construction site returned to work after a floor collapse last month in which 13 workers were hurt. OSHA is still investigating why the floor collapsed.

During Las Vegas' $32-billion building boom, construction workers were dying “at the rate of one every six weeks,” according to a two-year investigative series by the Las Vegas Sun newspaper. It exposed safety flaws and exposed the lack of oversight by safety regulators. Since then, new safety regulations have been put in place.

In Austin, the  Department of Labor and the Workers Defense Project looked at 65 construction sites and found more than 100 wage and safety violations.

The U.S. Labor Department says it noticed the large number of deaths and injuries among construction workers a few years ago, and so held a worker safety summit and educational push there. Secretary of Labor Hilda Solis said those efforts paid off and that Texas had made progress on worker safety in that state. But she still had “great concerns with respect to worker protection.”

The bottom line is that construction work is still very dangerous. The Center for Construction Research And Training released a report that found that during a lifetime of working in the construction trades, a worker has a five-time greater risk of dying on the job than non-construction industries. The reasons range from insufficient safety equipment to dangerous roofs to unstable grounds and earthmoving equipment.

Ignoring dangerous working environments for the sake of keeping the building costs down can be deadly. For Raul Zapata—and the wife and three children he left behind—it was.