As Negotiations Loom, Janitors From Across California March in LA 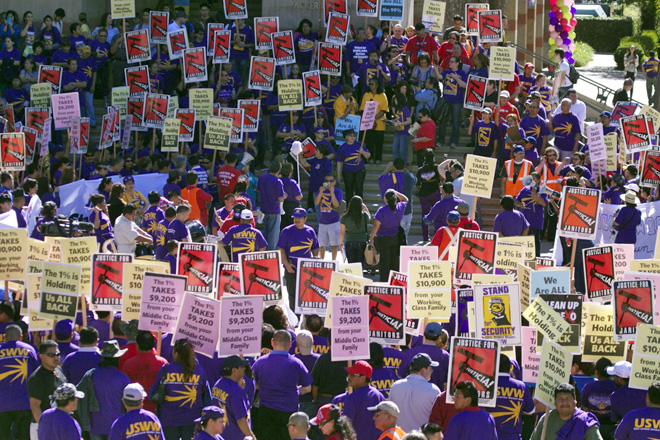 More than 1,200 workers march in Los Angeles on Thursday February 9.   (Photo by pocho1photography)

On April 30 the contracts for janitors will expire in Los Angeles and Orange County, in addition to contracts covering janitors in Silicon Valley, the East Bay and the Sacramento region.

Ahead of looming negotiations, more than 1,200 janitors and their supporters marched through the Westwood area of Los Angeles on Thursday, in an SEIU-USWW action.

The workers were clear they weren’t just marching for themselves. “We are part of the 99%," Alberto Varela said. "We are all workers who deserve basic rights… being paid justly and treated with respect and dignity, able to pay rent, food, clothing — things that are indispensible.”

As part of the action, the union released a study titled “How Much Is The 1 Percent Holding Back Your Family” (PDF link) that estimates to what degree the top 1% through its economic power, has lessened the income of middle and working class families. The economic analysis of the census and IRS data estimates

The report goes on to state that

From 1973 through 2010, middle-class and working class families income gains were no longer dramatic. They were marginal at best. The top 1%, however, made gains that were unprecedented—from 1973 to 2008, they increased a whopping 176%.

USWW spokesman Martin Terrones asks, “The study found that the working and middle class have lost approximately $10,000 in annual income. Most of these workers are barely scraping by. Imagine what they could do with an extra $10,000?”

The janitors are aligned with the Occupy Movement, which has brought attention and national discussion of economic inequality.

“The janitors that make up our union are very much part of the 99% Movement,” said SEIU United Service Workers West President Mike García, “We know we cannot continue to progress while everyone else is being held back: teachers and nurses, accountants and food servers, engineers and doctors, immigrants and the native born. It is time for all of us to take on The 1%.”

With building owners likely using the economy as a reason to keep wage increases low, the union is positioning itself to negotiate fiercely for its workers. This spring, workers represented by SEIU will be negotiating with some of the wealthiest companies and corporations about raising the workers’ standard of living.

"We are at a place in our history where we must make a choice: Will we allow corporations and CEOs to destroy good jobs and the middle class along with them, or will we demand better?" asked SEIU Executive Vice President Valarie Long on a union blog,

Says Varela, who is the sole caregiver for his wheelchair-bound mother, “We are marching not only for ourselves but for others. It’s a call to teachers, police, nurses, and the unemployed—who are feeling the weight of this economy. We are all affected. We hope others will fight with us. We are marching for them.”