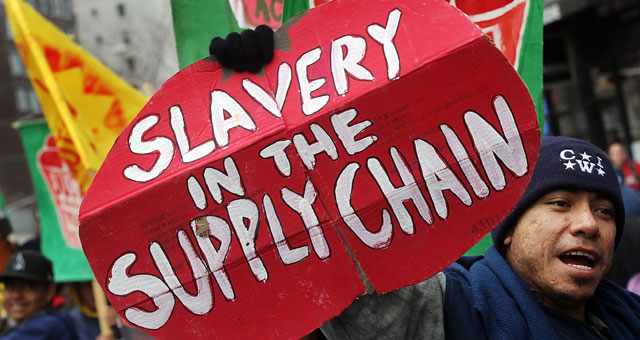 The dispute has been going strong for some time. Here, a CIW supporter pickets a Trader Joe's in Manhattan on February 28, 2011   (Mario Tama/Getty Images)

On Thursday, the Coalition of Immokalee Workers announced it had signed a Fair Food Agreement with Trader Joe’s, a significant step forward its efforts to bring fairness and accountability to the food industry.  “We are truly happy today to welcome Trader Joe’s aboard the Fair Food Program,” CIW’s Gerardo Reyes said in a joint statement issued by CIW and Trader Joe’s.  “Trader Joe’s is cherished by its customers for a number of reasons, but high on that list is the company’s commitment to ethical purchasing practices.”

The same statement, which the company has posted as a letter to customers on its website, hails Fair Food as "a groundbreaking approach to social responsibility in the U.S. produce industry that combines the Fair Food Code of Conduct...with a small price premium to help improve harvesters' wages." Trader Joe's did not respond to a request for further comment.

But it wasn’t long ago that activists were carrying “Traitor Joe’s” banners, and Trader Joe’s was condemning Fair Food Agreements as “overreaching, ambiguous, and improper.”

Trader Joe’s' reversal follows a months-long campaign. As Michelle Chen has reported for In These Times, it included "Trader Joe’s tours” last summer that picketed stores, educated consumers, and met with allies along the East and West Coasts.

In Boston, a group of fifth graders organized a rally outside a store. In New York, activists held a 1.6 mile run between two stores. The announcement of the settlement came on the eve of two planned days of coordinated protest pegged to the grand opening of Trader Joe’s' first-ever Florida location. That store, the company’s 367th, is located on Immokalee Road in Naples, 35 miles from the fields where the CIW was born.

CIW announced Thursday that Friday's and Saturday’s demonstrations, planned for Naples and 32 other cities, were being cancelled or replaced with actions targeting Fair Food holdout Publix instead.

CIW is a workers’ organization that partners with faith, labor, and consumer groups to push improvements in farm workers’ working conditions and voice on the job. It’s part of a growing trend of labor activism that takes place outside of the protections and restrictions of the National Labor Relations Act. CIW’s Trader Joe’s agreement is the latest in a series of victories achieved through comprehensive campaigns that leverage consumer and media pressure at strategic points in the tomato supply chain.

CIW achieved national prominence during its multi-year boycott of Taco Bell, which successfully forced the fast food giant to absorb the cost—a penny per pound—of modest labor reforms for workers in the fields. The three other largest fast food chains later followed suit.

CIW took the momentum from these victories—and the promise of an extra penny—and turned its focus to the growers who directly employ tomato growers.

As Kari Lyderson has reported for In These Times, agreements with major growers in 2010 mean that 90 percent of U.S. tomatoes come from growers who have signed Fair Food agreements. CIW estimates that more than 10,000 farm workers are now covered by these agreements. They include basic standards on wages and working conditions as well as a complaint procedure, independent auditing, and meetings between workers and management to monitor compliance. CIW is currently training farm workers on their rights under Fair Food Agreements, and how to enforce them.

Throughout the months that it rebuffed CIW’s call for a Fair Food Agreement, Trader Joe’s insisted that it was already paying the extra penny-per-pound. Given that major growers were already signed on, that may well have been true—which suggests that Trader Joe’s true objection may have been less about spending money than about sacrificing power.

Although CIW never called a boycott of Trader Joe’s, “it was always a possibility if we needed to get there,” says CIW staffer Julia Perkins. In November, CIW sent an e-mail promoting a campaign by the New York Community/ Farmworker Alliance to send “Dear Joe” letters breaking up with the company over its refusal to sign a Fair Food Agreement. “The persistence of fair food activists,” says Perkins, “and of their consumers too, who kept going over and over to them…helped to show them that this was something they wanted to do.”

In August interviews (for Alternet) during their East Coast Trader Joe’s Tour, Immokalee tomato workers Oscar Otzoy and Wilson Perez described how the 2010 agreements had, along with improving their wages, changed their working conditions: managers stopped rampantly stealing wages, denying breaks, and demanding sex in exchange for less strenuous assignments.

Their pay remains well short of a living wage.  But for the first time, said Perez, “We have a voice in the camps.”

Whole Foods was the first major supermarket to sign a Fair Food Agreement; Trader Joe’s is the second. Perkins says Trader Joe’s “didn’t agree to anything less” than Whole Foods had in its own agreement. CIW’s next major target is Publix, which has been refusing requests to sign an agreement.

CIW and religious allies have announced a six-day protest fast outside Publix headquarters that will begin March 5. Publix, charges Perkins, is “not just turning their back and refusing to meet with us, but really being a blockade in the road to truly changing conditions for farmworkers.”  But she expects Publix will eventually follow Trader Joe’s and Publix in signing on to the Fair Food model.  “It’s really the future of the industry.”