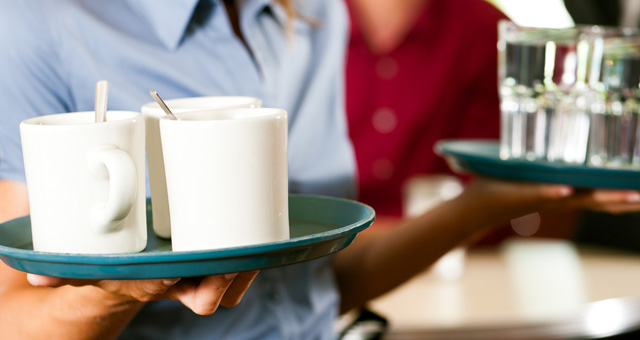 Many don't earn minimum wage, and benefits are basically nonexistent

Just in time for the restaurant industry's biggest day of the year, Restaurant Opportunities Centers United delivered an anti-Valentine to the industry for its systematic mistreatment of women in the business, from fast service joints to fine dining establishments. The report—"Tipped Over the Edge: Gender Inequity in the Restaurant Industry"—shows the business has delivered no tangible love to its workers and a healthy dose of discrimination towards women in the restaurant workforce.

ROC, an organization with more than 9,000 restaurant worker members in 19 cities, started in New York City a decade ago. It serves as a worker rights center, a research-oriented advocate for better public policy, and an organizer and supporter of "high road" restaurants that demonstrate, as ROC director Saru Jaramayan says, that "you can pay good wages and have a thriving business and industry."

But instead, most restaurants thrive—and the industry continues to grow and rack up record profits, even during these hard times—by paying workers poorly. ROC's report—supported by a dozen groups focused on women's rights—notes that the Bureau of Labor Statistics identified seven jobs in the restaurant industry in its 2010 list of the ten lowest-paid occupations. Including tips, the average server made $8.81 an hour. But the average is misleading because of huge variations in the industry.

First, there are big variations by state. The federal government sets a very low threshold with its subminimum wage for tipped employees. Although by law tips for categories of tipped employees like servers and the subminimum are supposed to yield at least the $7.25 minimum wage, many workers do not earn the minimum.

One big part of the problem is that the subminimum—set at $2.13 since 1991—has not been linked to 60 percent of the standard minimum since the Republican Congress de-linked it in 1996. Some states set higher subminimums or simply apply their often higher minimum wage to tipped employees as well. Although poverty of restaurant workers is higher than the workforce average everywhere, restaurant worker poverty is much higher in those states that stick to the federal subminimum.

Second, there are variations by occupation and by industry segment (fastserve, family dining, fine dining). While these variations generate inequalities among all restaurant workers, they hurt most with women who are disproportionately in the lower-wage occupations and segments as well as in tipped work, which makes them more vulnerable to state and federal subminimum wage policies.

Women servers earn only 68 percent of what male servers make—and black women only 60 percent, indicating how race as well as gender makes a difference. But at an average salary of $25,000 a year (compared to $17,000 for women), male servers aren't getting rich either.

Benefits and working conditions are grim on average, especially so in the vast majority of restaurants below "fine dining."  Many of those restaurants are part of large chains, such as Darden Restaurant Company, owner and operator of 1,900 restaurants such as Red Lobster and Olive Garden. Darden paid CEO Clarence Otis Jr. $8.5 million plus $22.1 million in stock options last year.

But for workers, especially women, the restaurant industry is not so generous:

• 90 percent of restaurant workers get no health insurance through their employer (and a third of women workers have no health coverage at all).

• 90 percent get no paid sick leave, which leads two-thirds of them to work while sick.

• women in the restaurant business are five times more likely to suffer sexual harassment at work than the average woman at work (making the industry the "single largest" source of harassment claims according to the EEOC).

• workers—with women most adversely affected—are subjected to arbitrary, short-notice changes in schedule, which makes planning difficult (especially for child care), and often cut hours of work and pay or extended hours into low periods. Tipped workers may be effectively working without pay.

While most of the industry's poor treatment affects all workers, female restaurant workers suffer most, partly because of discriminatory hiring patterns but also as a side-effect of public policy. Indeed, most of ROC's policy proposals would help men and women alike.

Foremost among the proposals is raising the federal subminimum to 70 percent of the standard minimum and once again linking the two. Others include national standards for paid sick days, a national mandate or incentives for sexual harassment training, better job training, and enacting policies to help workers get more control over schedules and support "collective organizing among restaurant workers."

The first and last are most critical, though the 70-percent standard is modest, considering that some big restaurant states like California have no subminimum and a state minimum above the federal level. And as far as the last proposal, ROC's current ambitions seem not to include full-fledged unionization. (And U.S. unions aren't paying much attention to restaurants. At one point, the predecessor of the UNITE-HERE union had a significant role in fine dining, but now beyond hotels its main dining targets are corporate, university and other cafeterias.)

Nor do ROC's long-range plans include moving toward an end to the tipping system, as many European countries have done. Both customers and workers would be better off if workers had living wages and good union contracts. Many workers now seem content with the tipping system itself, Jayaran says, but she also acknowledges, "Consumers should not be the ones responsible for workers' wages. The industry should provide a decent wage that allows them to survive."

But the group's organizing and spotlighting better employers proves their are no business obstacles to treating workers better. Barbara Sibley, a former industry employee who now owns La Palapa restaurant in New York, says paying her workers well and respecting them ultimately improves the customers' experiences. "Restaurant work is hard," she says, "but running a restaurant right is profitable. If I can run a restaurant right and make it profitable, anyone can."

Most workers, however, endure a job like Claudia Munoz had in Texas. Managers forced her to declare earning more tips than she took in so it would appear she made the minimum wage. They didn't pay her for overtime work. They forced her to work extra hours off the clock. Some days her hours were cut short, depriving her of the discounted employee meal, sometimes leading her to go without food for the day.

The ultimate insult came when managers charged her for the bill of a table that walked without paying while she was the only server in the restaurant, taking all her tips for the day and billing her for the balance. "I saw the racism, sexism, and low wages in the industry," she says. "Everything I remember from that place was horrible."

Now a ROC leader, she is trying to change one of the nation's largest industries, one desperately in need of public policy reforms and worker action.