Leadership Challenges Could Shake Up Nation’s Biggest Unions This Summer 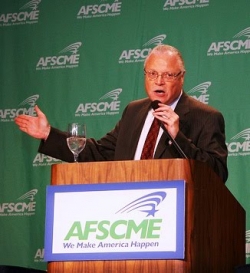 This summer could offer some of the biggest union leadership shake-ups in the recent history of the labor movement. The incumbent leadership teams of two of the nation’s largest and most politically active unions—the Service Employees International union (SEIU) and the public employees union (AFSCME)—could see challenges at their conventions in May and June, respectively.

Both unions are expected to spend $100 million each to re-elect Obama as well as be crucial players in the effort to recall Wisconsin Governor Scott Walker. The electoral jockeying of candidates for leadership positions in these two unions may have an effect on how SEIU and AFSCME, which each have more than 1 million members, pursue these two big political challenges as well as shape how the unions interact with the Democratic Party.

Donohue told In These Times that in the last election there were voting irregularities that negatively affected his candidacy. According to people interviewed supporting both Donohue and Saunders, however, AFSCME has formed committees around the country to hold open meetings on making sure the election procedures are fair. Regardles, the race will be quite heated.

“I think there needs to be a change in AFSCME. Some of these ideas that were great ideas 20 or 30 years ago when Gerry McEntee took over aren’t such great ideas now," Donohue says. "We haven’t done as much as we should have done in developing the capacity of state level affiliates throughout the country. I think some of our political investments at the national level haven’t been wise. I don’t think we should endorse every Democrat simply because they are Democrat. Sometimes, I think we should even look at endorsing Republicans on the state and local level when they support us.”

Saunders responded to In These Times’ request for an interview on the upcoming election by saying, "There will be plenty of time in the months ahead to debate internal politics. But as public employees across the country continue to be scapegoated for the country’s economic woes, and with elected officials both Democrat and Republican launching attacks on our members’ retirement security and collective bargaining rights, my focus now is on the battles that need to be fought together by the 1.6 million hard-working members of AFSCME.”

The election this June could lead to turmoil inside of one of the nations’ largest unions, because key staff members often leave unions when labor leaders they work for are voted out of office. The staff turmoil could affect the union’s ability to pursue the recall election against Governor Walker as well as the re-election of President Obama.

“I don’t think there would be a substantive change. The operations would go on no matter who the president is,” Donohue says.

Joseph P. Rugola, executive director of the Ohio Association of Public School Employees, who is backing Saunders against Donohue, also says AFSCME's "institutional capacity" won't suffer if top leaders change. “I think our unions are strong enough that," Rugola says. "We can fight these workers’ rights battle no matter what happens at the national level.”

The 2 million member-strong SEIU will also see a leadership challenge in a few months. In the last year, there have been a number of shake-ups among top leadership of SEIU. Top SEIU strategist Stephen Lerner, the brainchild behind the Justice for Janitors campaign, left the union. Lerner would not comment on his reason for leaving SEIU's staff, but wrote in an e-mail that he remains a member of SEIU's board of directors.

In the last year, Workers United leader Bruce Raynor, who backed SEIU President Mary Kay Henry’s defeated opponent Anna Burger in an election a few years ago, was forced to resign from the union over charges of misusing union funds. Also, SEIU’s Dennis Rivera, who also supported Burger, was demoted from his leadership role as SEIU Healthcare Chair to “Senior Policy Advisor."

In recent weeks, there has been discussion among SEIU observers that Executive Vice President Gerry Hudson may challenge Henry for the union's top spot in May at the SEIU convention. But it's unclear if he'll actually run; SEIU staff members did not respond to requests for comment for this story.

However, if Hudson did run, he would need the support of his home local, SEIU 1199 in New York, headed by George Gresham. 1199 is the largest local union within SEIU, and it controls about 20 percent of convention delegates. SEIU 1199 staff did not return a request for comment.

"It's not surprising that SEIU PR people refuse to comment on personnel changes at the top. Even members of the union can't find out who's at the top and who's not anymore," said Steve Early, whose most recent book, The Civil Wars in U.S. Labor, is about SEIU. (Early is also an occasional contributor to Working In These Times.) "Unlike many other unions which detail their top-ranking members, SEIU's website doesn't contain a list of its 70-odd executive board members."

Early continued: "This [election] process inevitably becomes the subject of gossip, rumor, and speculation, because at the top of the union SEIU's internal politics are very much like those in any other one-party state. ... The power-plays take place behind closed doors. The leadership line-up gets reshuffled periodically, but decision-making control remains in the hands of a very small group of people. A broader delegate body like the SEIU convention in May is expected to be nothing more than a rubber-stamp."

While the various sides of AFSCME leadership fights have pledged to work together no matter what happens in this election, top SEIU leaders are silent on what they or may not do if a challenge to Mary Kay Henry and others occurs.

Stay tuned as the conventions approach—things should get interesting.