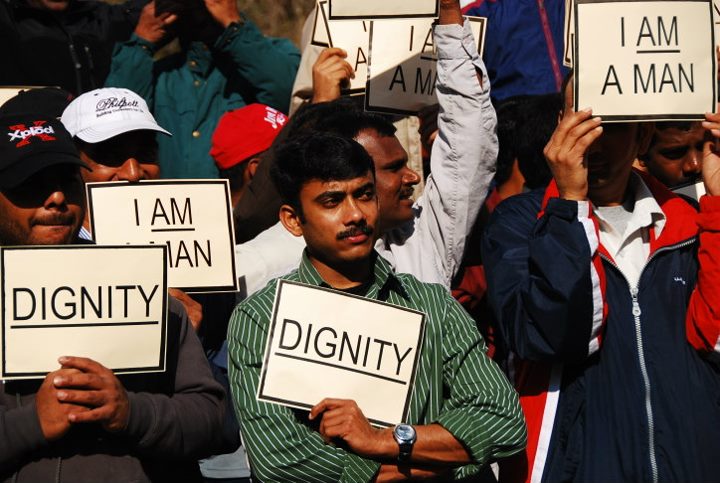 Do you value the independent journalism you find at In These Times? Please donate today to help us continue publishing articles like this.

The debate around immigration in Washington brings the same smoke and mirrors each election cycle: anti-immigrant slogans about “securing the border” flashing alongside craftily worded policies to sustain the flow of cheap labor, legal or not. Politicians seem to want it both ways: keeping immigrants locked into a brutal underground workforce, while using mass deportation and constant abuse to exclude them from society.

One popular "compromise" policy on immigration, the “guestworker model,” perfectly weds the ideas of “free markets” and forced labor. For many years, special visa programs have allowed employers to hire temporary foreign labor at paltry wages with minimal oversight. It would be the ultimate captive labor force, except a few things get in the way--mainly that even these workers have some rights under the law, plus indentured servitude looks terribly out-of-date these days, even with Washington's stamp of approval.

In recent months, young workers channeled into Hershey factory jobs under the J-1 visa “student exchange” program have protested against cruel, coercive working conditions.  Advocates have also called attention to exploited workers under the H2-B program, which places tens of thousands of temporary workers in trades like hotel services and landscaping. For years, various investigations and lawsuits have exposed systematic abuses of seasonal farmworkers in the H2-A program, who toil in conditions often akin to slavery.

The federal government has made some small steps toward addressing guestworker exploitation . As we've reported before, reforms to the J-1 program are apparently underway to rein in the abuse and trafficking of youth.

New revisions to the H2-B rules would tighten oversight of bosses to prevent them from skirting wage and hour laws and from retaliating against workers who file complaints. Employers would also have disclose the use of foreign recruitment services, which are known around the world for facilitating debt bondage and human trafficking networks.

Daniel Castellanos, an activist with New Orleans-based National Guestworker Alliance, said in a statement, “For too long, guestworkers have been lured to the U.S. with false promises of an American Dream, and instead faced deep debt and exploitation... Because these rules contain real worker protections and expand our right to organize, we can win fair wages and working conditions for all workers.”

Castellanos arrived in New Orleans from Peru in 2005, hoping to aid with the post-Hurricane Katrina reconstruction. Soon he and hundreds of other imported workers found themselves stuck in menial hotel jobs and sinking deeper into debt as the promised wages never materialized. Post-Katrina recovery efforts were replete with such labor abuses. Hundreds of guestworkers from India faced a similar crisis; according to a lawsuit against the marine industry firm Signal International, they were trafficked into the U.S., held under brutal conditions in “overcrowded labor camps,” and cheated out of their pay.

While Labor Department's new measures might help prevent some abuses, they skirt the heart of the problem: Far from offering a more regulated alternative to undocumented migrant labor, guestworker programs (which have been the model for mainstream immigration reform proposals) encourage the same abuses that “illegal” workers suffer. The end result is an inherently unequal tiered workforce, abetted by anemic regulatory regimes and a web of subcontractors that dodge the law. Though this pattern undermines both citizen and immigrant workers, too often the crisis is goads immigrant bashing rather than condemnation of unscrupulous companies.

Rebecca Smith of the National Employment Law Project told In These Times, “All of the guestworker programs that focus on low wage work have one thing in common:  Employers bypass available U.S. Workers in favor of temporary foreign workers who are subjected to abusive conditions up to and including outright debt bondage and trafficking.” Smith also noted that employers can easily avoid oversight by contracting with other companies.

Such outsourcing of exploitation is a common practice cross the workforce, immigrants and citizens alike. When employers rely on sketchy subcontractors, Smith said:

Workers lose out on labor rights, often because they don't know who the main employer is, or don't know they have a right to pursue it for violations... It's one of the reasons that job quality is deteriorating and one of the ways in which the 1 per cent who rule the workplace are undermining economic security for the rest of us who work for a living.

Ironically, just as the Labor Department rolled out new regulations on non-agricultural guestworkers, the USDA has pulled back from an initiative to require companies that contract with the agency’s to prove compliance with federal labor laws. In other words, while working toward stronger oversight of certain categories of authorized migrants, the administration has backed off efforts to curb the hellish conditions looming over the masses of seasonal farmworkers dotting the nation’s fields.

Ultimately, the ball is in the court of Congress, whose long stalemate on immigration reform caters to the corporations that prey on migrants. Bruce Goldstein of Farmworker Justice told In These Times:

The failure of Congress to pass immigration reform, especially a legalization program for undocumented workers, is having devastating effects on farmworkers and their families. And the increased number of deportations and incredibly punitive state immigration laws are exacerbating these problems.  The Administration is taking some action that is helpful, but it doesn't have the power to change the immigration laws.

That’s the moral inconvenience of managed exploitation—it harms not only marginalized workers but all workers by institutionalizing inequality and arbitrary enforcement of the law, and undermining labor’s power to take collective action. Injustice can’t be regulated, only abolished.