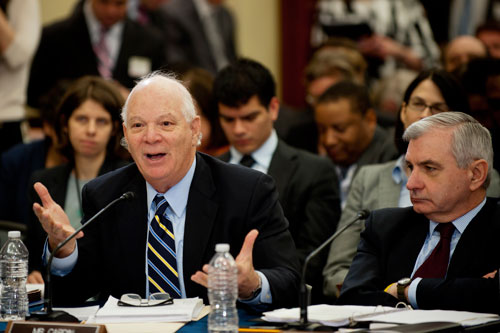 WASHINGTON, D.C.—The AFL-CIO continues to mull over endorsing President Obama for re-election. But a recent deal that congressional Democrats made to increase pension contributions by federal employees might cause the labor federation to think again about officially falling into line behind the president.

Seeking to find a way to pay for an extension of unemployment pay benefits and a continuation of the payroll tax cut holiday, House Republicans proposed extending a pay freeze on federal employees that President Obama imposed on workers last year. Democrats rejected extending the pay freeze or increasing pension contributions on federal employees.

Sen. Benjamin Cardin (D-Md.) said the president's 2013 budget proposal to force current federal employees to pay 1.2 percent more toward retirement over a period of three years made it “challenging” to resist pension changes. “He made it more challenging for us to be able to keep the federal contribution from workers out of the package...,” Cardin told the Washington Post.

“If there must be offsets to counter the cost of extending unemployment insurance, let them come from a group that has not already given $60 billion toward deficit reduction in the form of a two-year pay freeze, and is slated to give $28 billion more from the plan to withhold salary adjustment in the future," Beth Moten, legislative and political director of the American Federation of Government Employees (AFGE) union, said in a letter to members of the House. "The millionaires and billionaires who have continued to profit during who have continued during this economic recession haven’t been asked to pay one nickel more in taxes.”

The pay freeze and continuing attacks on workers’ wages and pensions are affecting morale inside the federal workforce, employees and union officials say. “I am thinking about retiring in June. I am not going to retire..., but I feel forced to by everything that is going on. I want to get out now before more changes are made,” said Bernice Williams, a nurse at a VA Hospital in Phoenix, Ariz.

“These kinds of attacks clearly are hurting the recruitment and retention efforts of federal agencies and the morale of dedicated and committed workers performing vital functions,” National Treasury Employees Union President Colleen Kelley said in a statement. “Every member of Congress needs to understand the heavy price that is paid when the pay, benefits and rights of federal workers come under constant attack like this—and their contributions to our society denigrated.”

The House and Senate approved the deal Friday (the votes were 293-132 and 60-36, respectively) despite opposition from both the AFGE and the National Treasury Employees Union.

Given the new changes to federal pension contributions and President Obama’s signing of a bill last Wednesday that rolls back the rights of airline workers to union organize, perhaps the AFL-CIO should merely recommend that its members vote against the eventual GOP nominee, instead of endorsing Obama.