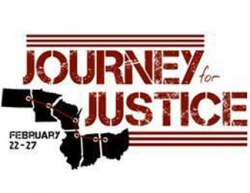 ST. PAUL, MINN.—Yesterday, locked-out union workers from five different American Crystal Sugar (ACS) facilities in Minnesota, North Dakota and Iowa, as well as locked-out workers from Cooper Tire, set out on a 1,000-mile "Journey for Justice" across the United States to raise awareness of their plight. The ACS workers are members of the Bakery, Confectionery, Tobacco Workers and Grain Millers International Union (BCTGM), while the Cooper workers are part of a United Steelworkers (USW) Ohio local.

The five-day-long trip will stretch through key battleground states for labor rights in America right now: Wisconsin, Ohio and Indiana. The story of these struggling workers represents much of what’s ailing the labor movement right now.

ACS locked more than 1,200 employees out out of their plants last August after BCTGM rejected proposed increases in healthcare costs and provisions that would allow the company to undermine the union by outsourcing work to nonunion workers. In November, Cooper Tire locked out 1,050 workers after they refused to agree to demands that workers take a wage cut to as little as $13 per hour, assume additional healthcare costs and eliminate pensions for new hires.

The two lockouts have many similarities. Both occurred at companies making huge profits where there had previously never been a lockout or a strike. And both ACS and Cooper are demanding big concessions, and both unions claim the companies aren't bargaining in good faith.

Lockouts, which have become dramatically more frequent in the United States in recent years, are a tool used by companies to put workers on the defensive while a new contract is being bargained. They strengthen the company's power during bargaining because a company, and not workers, can decide when workers can come back to the workplace. Out-of-work union members are often desperate to accept any type of deal just to return to some level of normalcy.

“I have worked there for 30 years and we always got along well with management,” says Robert Greer, a Cooper Tire worker in Findlay, Ohio. “We never expected to be locked-out, this isn’t something that we wanted or we planned for.“

Greer's surprise in many ways sums up the overall feeling during the first stop on the tour in St. Paul, Minn., where labor leaders now unexpectedly find themselves in a fight over a possible so-called "right-to-work" constitutional ballot referendum in November. A "right-to-work" measure, which allows private-sector workers to benefit from a union contract without having to pay dues to the union, was recently passed by GOP lawmakers in Indiana.

Some Republicans in the GOP-controlled Minnesota State Legislature are attempting to place a constitutional amendment on the ballot in November that would make Minnesota the 24th "right-to-work" state. But given that some Minnesota State House Republicans are supportive of unions, it's unclear if the measure could pass.

“It all depends on whether these House Republicans, who in years past would always stay with us, will vote to put this on the ballot. However, now they are worried about this Club for Growth corporate groups running primaries against them if they don’t support right-to-work,” says Minnesota AFL-CIO Chief of Staff Brad Lehto. “It’s all this corporate money flooding in because of [U.S. Supreme Court ruling] Citizens United that is making right-to-work here even a possibility.”

A recent poll conducted by Survey USA shows that a "right-to-work" ballot measure would pass easily in Minnesota. While Survey USA's results tends to lean towards conservatives, the poll does confirm the feeling of many people in the Minnesota labor movement that the measure would be tough to defeat.

“The messaging ... is just brilliant. “Right to work” sounds like such an innocent thing when it is on the ballot. Everyone wants the right to work, but most people don’t understand that it’s a bad thing,” says Minnesota AFL-CIO Mobilizing and Organizing Director Candace Lund.

As the incipient ballot fight and struggle of locked-out ACS and Cooper workers shows, while the labor movement is more mobilized than ever in the wake of last year's high-profile fights in Wisconsin and Ohio and the launch of the Occupy movement, it still finds itself in unexpectedly tough fights across the country.

Full disclosure: The United Steelworkers union is an In These Times sponsor.