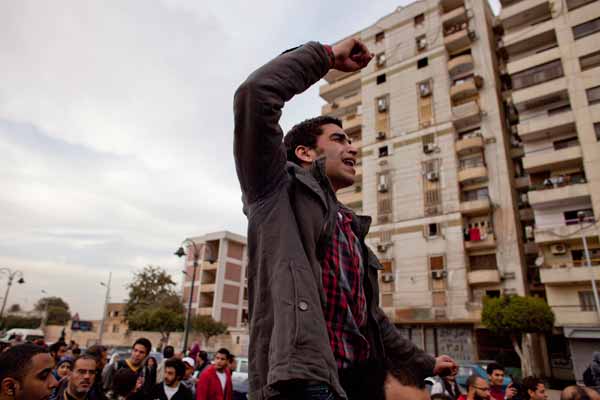 A protester shouts slogans during a demonstration against the military rulers of the country on February 10, 2012, in Cairo.   (Photo by Carsten Koall/Getty Images)

To commemorate the first anniversary of the overthrow of the dictatorship, activists in Egypt called for a general strike earlier this month. But compared to the massive uprising of 2011, the response on the ground was muted. The military regime that has succeeded Hosni Mubarak was predictably dismissive of the anti-government “plotters,” and even activists acknowledged what seems to be a sort of protest fatigue.

But a year ago, when the Arab Spring was still fresh, labor activists were on the frontlines across Egypt, leading a massive wave of strikes and demonstrations. Today many ordinary Egyptians appear deflated or disilllusioned. With the new political structure divided between Islamist factions and a military junta, the country may be drifting back toward the familiar trade-off between democratic aspirations and political stability.

It was business as usual at Cairo's railway station and airport. Buses and the metro ran as normal and an official said the strike call had no impact on the Suez Canal...

"We are hungry and we have to feed our children," said bus driver Ahmed Khalil, explaining why he was not taking part in the labor action called by liberal and leftist groups, together with some student and independent trade unions.

"I have to come here every morning and work. I don't care if there is a strike or civil disobedience," he said.

The tepid response doesn’t necessarily suggest people have given up on systemic change, but it does represent the challenges of sustaining hope in the face of state oppression and economic crisis. At this stage, worker-led initiatives might again provide a vital boost, but activists haven’t yet channeled workers’ everyday grievances into a comprehensive political vision.

Noting that workers are often not politically organized, even if they're willing to strike, Hossam el-Hamalawy, journalist and organizer with the Egyptian Revolutionary Socialists, told In These Times:

The general strike was successful in the universities because of the existence of independent student unions and student groups on the ground that could mobilize for this. In the case of the workers, we do not have (yet) either an independent trade union federation or a labor party that could pull this together. General strikes cannot be organized via Facebook calls.

But labor was a vibrant force of dissent in Egypt long before the Arab Spring. Worker-activists were involved both in the nationalist movements of the early-twentieth century and later on, in struggles under the authoritarian rule that was enforced by the state union apparatus. When neoliberal policies took hold of the economy during the 1970s, workers confronted a convergence of capitalist exploitation and state repression, fraught with low wages, gender discrimination and crackdowns on labor organizing.

The upheaval that began last January was in some ways an extension of this tradition. In his research on Egypt's labor movement (published in an AFL-CIO Solidarity Center report), historian Joel Beinin has documented hundreds upon hundreds of strikes and protests over the past several years. Uprisings often responded directly to workplace conflicts, with particularly strong mobilization in the textile industry and public sector. The pattern of wildcat strikes continued in 2011.

Beinin told ITT that, since civil society was so suppressed under authoritarian rule, many workers today--

aren't used to sitting down and talking about politics and the country in a reasoned, logical kind of way... What they do is they [say], "Our management is corrupt, it was a crime to sell this public sector enterprise to these private investors who then reneged on their contractual obligations anyway--things like that. They don't usually say, "The problem is, the IMF and the World Bank are trying to shape the Egyptian economy along vicious, vulture, private-sector capitalist lines."

In the process of building a grassroots political movement, he noted, “There's been this problem of trying to get workers in general to believe that there is a broader problem than whatever the issues are at their workplace.”

While workers are consumed with immediate problems of economic instability and unemployment, labor activists struggle to find unity as organizations jostle for representation in the fractious post-Mubarak political landscape. Meanwhile, reactionary political forces and state violence have narrowed the public sphere for dissent.

Yet new pro-labor coalitions are emerging--across sectors, political communities, and even national boundaries (though collaboration with international civic groups remains intensely controversial). In a report on a recent Egyptian trade union conference, Ben Moxham of the UK-based Trades Union Congress observed promising diversity among the participants, including women and rural workers:

What impressed me greatly is that these folks aren’t waiting for some legislative silver bullet to deliver a union movement to them. They are going out there and making it under laws that haven’t changed since Hosni Mubarak owned the country.

Kamal Abbas, leader of the advocacy group Center for Trade Union and Workers Services, reflected with cautious optimism on the prospects for strengthening independent unions and worker-led movements in a June 2011 interview with Toward Freedom: “The challenge now that the revolution has succeeded is to be able to build a society of social justice.”

Months later, that vision is shadowed by a creeping sense of frustration and futility, especially among struggling communities that, for now, are more focused on survival than on political ideals. Egyptians haven’t given up on their revolution, but to bring people back to Tahrir Square, labor and activist groups need to rekindle faded solidarity on the ground level, before the counter-revolution stamps out its last embers.