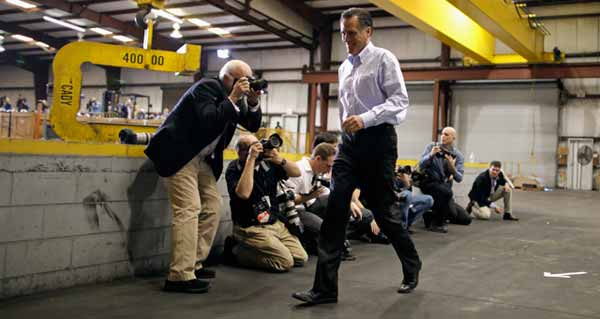 Whatever happened to Reagan's belief in 'sacred right of American workers to negotiate their wages'?

Even with labor reduced to just 6.9 percent of the private-sector workforce and under 13 percent overall, the Republican presidential candidates are attacking the country's faltering union movement, unleashing venom at every opportunity about "union bosses" and "union stooges" as a major threat to America.

Mitt Romney has been aggressively campaiging for a national "right to work" law like the one just passed in Indiana which bans the "union shop," thereby allowing management to divide workers and eventually erode support for unions. The rhetoric from Romney, Rick Santorum, Newt Gingrich and Ron Paul about unions is often silly, sophomoric and just false.

Romney stirred up anti-union sentiment by asserting falsely that "union stooges" on the National Labor Relations Board banned Boeing from moving a plant to South Carolina simply because it is a right-to-work" state. Gingrich also called for "de-funding" the NLRB because of the decision, which was actually based on Boeing's illegal attempt to punish International Association of Machinists and Aerospace Workers in Washington state for exercising their right to strike.

The barrage injects profoundly anti-democratic views into the public discourse and serves to delegitimize longstanding labor rights and marginalize labor unions, seemingly with a view toward their eventual elimination.

"It's inflammatory, showing that they are going hard right," obserrves John Drew, a United Auto Workers international representative and former president of the UAW Local 72 at the Kenosha, Wis., Chrysler plant, which is now closed. The last 850 engine production jobs shifted to a new plant in Mexico.

"Romney just oozes privilege," he notes. "But they are all desperately looking for ways to inflame the base," Drew says. "It may resonate with those who hold extreme right-wing views, but it's a sign of how out of touch they are with most people."

The current Republican contenders' hostility is extreme compared even with the sainted Ronald Reagan, who infamously fired 11,000 air controllers in 1981. But Reagan, once the president of the Screen Actors Guild Union, maintained some respect for unions' role in society, saluting “the sacred right of American workers to negotiate their wages.” Reagan even told the Carpenters union:

[C]ollective bargaining…has played a major role in America’s economic miracle. Unions represent some of the freest institutions in this land. There are few finer examples of participatory democracy to be found anywhere.

But the Republicans now regularly portray unions as authoritarian, top-down institutions run ruthlessly and unilaterally by "bosses," a much more precise description of how corporations are structured. The GOP contenders' nonstop war of words serves to justify management assaults on labor rights and to make nonunion workers hesitant to have anything to do with such intensely-demonized organizations.

The attacks on unions have been coupled with all the candidates' fervent defense of America's current extreme state of economic inequality. They have lashed out at the "Occupy" Movement which has so forcefully focused public debate on the ever-expanding wealth and power of the top 1% while the vast majority of Americans struggle against wage cuts, permanent job losses, rising prices, home foreclosures, gaps in healthcare insurance and the loss of retirement benefits.

Former labor secretary Robert Reich describes the current situation succinctly: "as economic risk-taking has declined at the top, it’s been increasing at the middle and below."

Yet for the Republican presidential hopefuls, stark inequality reflects a natural process and the healthy sorting-out performed by capitalism. Santorum, for example, has blustered:

Romney reacted angrily to criticism of his role in the Bain Capital private equity firm, which busted unions, loaded up companies with debts and ran several into the ground while walking away with immense profits. When then-candidate Rick Perry stunningly called Bain an example of "vulture capitalism" and Gingrich chimed in with some populist-sound jabs, Romney whined, "President Obama wants to put free enterprise on trial...In the last few days, we have seen some desperate Republicans join forces with him."

Romney has stopped short of calling the labor movement the spawn of Satan, as Santorum may be tempted to do. But he has characterized the government bailout of GM and Chrysler, which inconveniently started under George W. Bush, as a direct giveaway of corporate property to the United Auto Workers.  In fact, the restructuring of the two firms imposed undue sacrifices on the workers and failed to condition federal aid on the corporatrrions keeping jobs in the United States.

The New Republic‘s Jonathan Cohn has dissected Romney's version and  judged it “a pretty skewed version of the truth":

[T]he unions had by 2009 already made major concessions in order to help the companies restructure… Then, during the bankruptcy, the unions agreed to further concessions still, on pay, vacations, job security, health benefits and work rules. As a result, traditional Chrysler and GM hourly employees have seen no annual raises since 2003 and will see no raises until at least 2015, when they bargain the next contract.

Ultimately, the bailouts succeeded in saving an estimated 1.4 million auto-related jobs and allowng the two firms to surive and thrive.

Romney hit a new peak of hypocrisy when he denounced "compulsory unionism" and the use of union money for political campaigns. Labor was outspent 15-1 by corporate interests in the 2008 federal elections the Center for Responsive Politics calculated, but Romney continues to portray labor as an all-powerful force extorting money from members and then buying off Democratic politicians.

You know that I’m a guy that believes in right-to-work laws. I’m also a guy who believes you shouldn’t be able to take money out of people’s paychecks to put into political action committees run by the union bosses. People should be free to put their money wherever they want.

In line with this view, Romney would like to severely restrict union political contributions (most of them voluntary)—but he defends right of a few corporate tycoons to dominate the political process. As a believer in the unpopular concept that "Corporations are people" and supporter of the  Citizens United decision, Romney believes that it is perfectly fine for him to raise $5 million from just 25 donors.

Under the new rules shaped by Citizens United, a new form of political power has emerged to concentrate political contributions and intensify the influence of the super-rich. As Ari Melber of The Nation has documented,

The Super-PAC era gives a whole new meaning to the phrase “the buying of the president. A recent report from Demos and US PIRG found that 196 people have contributed nearly 80 percent of the individual donations to Super PACs in 2010 and 2011 by giving $100,000 or more each, for a total of $79 million. ... They are the .000063 percent of the electorate who will shape the 2012 campaign on both sides of the aisle.

Ultimately, the Republican presidential contenders—reliant on a political funding system that reinforces and exacerbates its economic polarization—live in a world apart from the problems imposed by America's inequitable economic system.