Apple Turns to the Larry King of Sweatshop Scandals 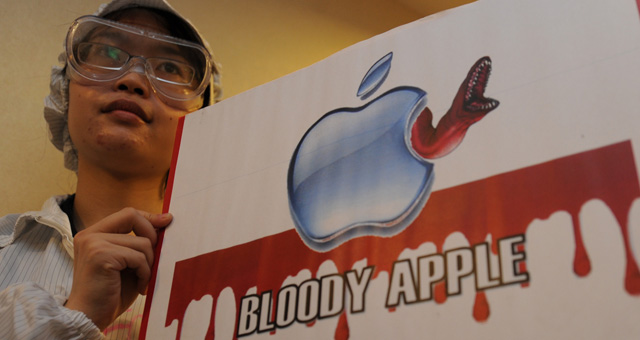 A young protester demonstrates outside of the annual Foxconn general meeting in Hong Kong on May 18, 2011. (Mike Clarke/AFP/Getty Images)

Apple's chosen monitor has long been criticized by anti-sweatshop activists.

Wracked by weeks of bad press over the conditions under which its products are made, this month Apple called in the Fair Labor Association. “We believe that workers everywhere have the right to a safe and fair work environment,” said Apple CEO Tim Cook in a February 13 release, “which is why we’ve asked the FLA to independently assess the performance of our largest suppliers.”

Cook promised inspections “unprecedented in the electronics industry, both in size and scope…” Two days later, FLA President Auren van Heerden told Reuters that so far he had found the FoxConn facilities—where workers had recently threatened mass suicide —“first class; the physical conditions are way, way above average of the norm.”

Perhaps this should not have been a surprise. Corporations turn to the FLA during scandals for the same reasons celebrities turn to Larry King: it’s high-profile, it’s establishment-approved, and it won’t press as hard as the alternatives.

A history of compliance

The FLA was formed in 1999 with funding and backing from the Clinton administration, following years of prominent anti-sweatshop activism in the United States. It came three years after Kathy Lee Gifford’s well-televised tears over alleged abuses in factories producing her clothing label. The FLA's Apple investigation represents its first foray into the tech industry. From the beginning, the FLA has described its approach as about bringing stakeholders into the process. Along with universities and nonprofits, several members of its board are apparel corporations. Companies play a major role in investigating themselves, and evaluating each others’ compliance.

An FLA spokesperson declined to comment.  But in an interview with the New York Times, its Executive Director Jorge Perez-Lopez said the organization has successfully reduced child labor in China and Latin America and discrimination against pregnant workers in Latin America. Van Heerden defended the FLA system to Reuters as “very tough.  It involves unannounced visits, complete access, public reporting.”

Charles Kernaghan, whose meetings with Honduran children making Gifford-branded clothing helped make their conditions an international story, takes a different view.  "The FLA has maybe 10% credibility," says Kernaghan, who directs the Institute for Global Labour and Human Rights.  "We've never seen anything from them that we would consider to be more than 50% or 30% accurate."

Kernaghan traces the impetus for the FLA to the mid-90's, when his organization (then called the National Labor Committee), after a lengthy stuggle, convinced a Vice-President of Gap to allow a Jesuit-led team of independent monitors into a factory in El Salvador.  "You had people that were not corruptible," says Kernaghan, "that were not in the pocket of the companies, and they began to monitor the factories, and they found every single violation we had found."  Kernaghan says management has told him that after Gap let the Jesuits in, all of its competitors began calling and saying, "Are you out of your mind?"

Kernaghan says that victory created a market for less aggressive alternatives that corporations could bring in instead.  "They got dollar bills in their eyes.." says Kernaghan.  "It was one phony group after another."  He cites the Harvest Ridge factory in Bangladesh, where the IGLHR filmed a 11 year-old worker worker describing 14-hour days working for 6.5 cents an hour without being allowed to sit down.  "If she fell behind her production goal, the manager would slap her very hard."  When Kernaghan testified about these abuses in Congress, management cited the FLA's finding that the factory was fully cimpliant.

Having "realized that the corporations and the FLA had hijacked monitoring," Kernaghan says the IGLHR has shifted its demands to disclosure of factory locations and federal legislation.  "You had to get around the FLA, because they're useless."

The FLA’s most vocal critic has been United Students Against Sweatshops, whose activism also helped spark the FLA’s creation. USAS supported the formation of an alternative organization, the Workers Rights Consortium, whose board is composed of student activists, university administrators, and representatives of labor and nonprofits.

The FLA’s “purpose from the beginning, from our view, was to serve primarily as a cover-up for corporations and a smoke screen…” says Yale Law student Mary Yanik, a member of USAS’ Coordinating Committee and of the WRC’s Board. “It’s never been a strong worker advocate, and it’s been very detrimental to the anti-sweatshop movement.”  (Yanik made clear she was not speaking on behalf of the WRC)

USAS has long criticized the FLA on several counts: Companies’ suppliers are monitored by contracted investigators who the FLA hires with funds from participating companies.  These firms are supplemented by management staff monitoring their own factories. The FLA’s super-majority requirement gives its corporate members more than enough votes to block any action proposed by the universities or non-profits on its board. Not disclosing the specific factories that were inspected makes it harder for current or former workers, activists, or other monitors to contradict the FLA’s findings.  Following UNITE’s (full disclosure: a predecessor union to my former employer UNITE HERE) 2003 resignation in protest, there are no unions on the FLA’s board. Conducting interviews on company property makes it less likely workers will voice criticisms.

“If you’re speaking to the workers when the manager at over there, and the workers see you to be really buddy-buddy with their supervisors, it’s unlikely the workers are going to trust you,” says Yanik.  And companies that do wrong often get away with it.

In 2008, USAS slammed the FLA for welcoming underwear-manufacturer Hanes on board as its latest “Corporate Member.” The year before, activists had alleged retaliation when Hanes, which directly employs factory workers, fired over 30 from a Dominican Republic factory where workers were organizing. USAS charged that the FLA granted Hanes its new status, which came with donations to the FLA, without concessions on that campaign, or consultations with any of the workers or activists involved.

In recent years, some universities that affiliated with the FLA for accreditation of their apparel, including the University of Miami and Santa Clara University, have left the organization.

'Fox guarding the henhouse' at FoxConn?

The FLA’s handling of FoxConn Technology Group has so far done little to assuage critics’ concerns. FoxConn employs over a million factory workers producing products for companies like Microsoft, Dell, and Apple. FoxConn drew international attention in 2010, after dozens of employees committed suicide. That attention returned when workers threatened additional suicides this year. The 2010 suicides drew promises of reform—and the installation of nets.

This month FLA President Van Heerden told Reuters he was surprised by “how tranquil it is compared with a garment factory. So the problems are not the intensity and burnout and pressure-cooker environment you have in a garment factory…It’s more a function of monotony, of boredom, of alienation perhaps.”

But as Michelle Chen, R.M. Arrieta, and Mike Elk have reported for In These Times, workers and other monitors have told a very different story.

“Some of my roommates weep in the dormitory,” Foxconn worker Chen Liming told SACOM.  “I want to cry as well but my tears have not come out.” A January New York Times article described what happened when Apple decided the soon-to-be-released iPhone 5 needed different screens: “A foreman immediately roused 8,000 workers inside the company’s dormitories…Each employee was given a biscuit and a cup of tea, guided to a workstation and within half an hour started a 12-hour shift…”  (As I’ve reported for In These Times, working for Apple in its U.S. retail stores is no workers’ paradise either.)

“I’m amazed that the FLA would give one of the most notoriously abusive factories in the world a clean bill of health—based, it appears, on nothing more than a guided tour provided by the owner,” WRC Executive Director Scott Nova told the New York Times February 16.  “If the FLA wants to convince people that it can somehow conduct an impartial investigation of Apple, despite being funded by Apple, this is not a good way to start.”

Five days later, the FLA issued an updated statement saying that “This thorough investigation continues to progress in the same way as each of the FLA’s other assessments and investigations have – fairly, thoughly and independently.”  The statement said that the investigation would include both on-site and off-site interviews.

USAS International Campaigns Coordinator Teresa Cheng says using offsite interviews is “an aberration for the FLA,” and that she has “no doubt that their decision to even do off-site interviews would be because of public pressure and critique.” But she says such interviews are unlikely to result in a more critical report. In some cases, charges Cheng, the FLA has “contracted staff who’ve made conclusions indicting companies, and implicating companies in conduct as extreme as giving death threats to union leaders…and the FLA has even overridden the conclusions of its own investigators.”

The FLA’s limits as a force for “Fair Labor” aren’t just about low standards—they’re about workers’ power to judge their own labor conditions. This is an issue that the anti-sweatshop movement long wrestled with, and it’s why USAS avoids calling for boycotts without the support of a factory’s own workers.

While the FLA may claim credit for publicizing particularly egregious conditions, Yanik says its can’t change the industry because it doesn’t meaningfully support workers’ right to organize. She cites the case of the Jerzees de Honduras factory. “The FLA discouraged the workers that were trying to form a union from lodging a complaint.”  After workers were fired for organizing, charges Yanik, FLA monitors “said everything was fine…a few months later the FLA had to go back and retract its entire report.”

“The only way to really address these problems is to empower workers…” says Yanik.  “Workers in these factories are always going to be the best enforcers. The FLA has never taken that view.”

"If workers have rights, and they can exercise those rights," says Kernaghan, " they will be in...a hundred thousand times better position than to have the FLA fly in once in a while and talk to workers who are terrified to talk to them.  They should get out of the way."