In All-India General Strike, Workers Go All Out Against Neoliberalism 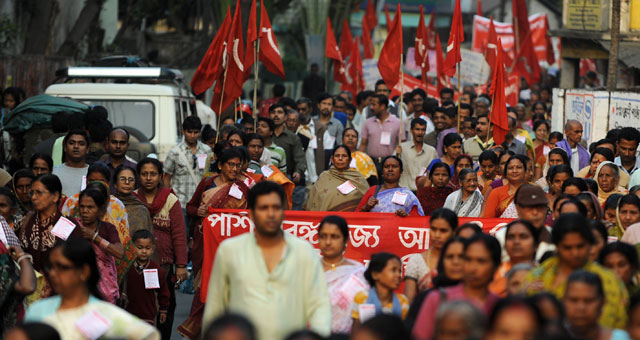 Trade union activists participate in a rally to show support for the All India General Strike, in Siliguri on February 27, 2012. (Diptendu Dutta/AFP/Getty Images)

India’s economic ascent seems like it should be the envy of the world’s richest nations; with rocketing growth rates and gargantuan consumer and labor markets, India's destiny as Asia's next superstar looks beyond a doubt. Except Indian workers just gave the boosters of global capitalism a few million second thoughts.

The all-India general strike of February 28 brought together workers of various sectors and political stripes, civil servants along with rickshaw drivers, united under a banner of opposition to neoliberal policies of Prime Minister Manmohan Singh's government. The labor movement of the world’s largest democracy issued a stark challenge to the idea of deregulation as an economic cure.

AFP quoted All India Trade Union Congress general secretary Gurudas Dasgupta: “We are fighting for our rights against a government that is anti-people.”

The core grievances center around government corruption, rising costs of living, labor violations, privatization, and the general rush to hand the economy over to the talons of free enterprise and shred the welfare state.

Public Services International, a global union that works with public employees in India, articulated a broad agenda of social and economic protection:

The common demands are (a) gaining the same rights and protection for temporary and contract workers as that of permanent workers, (b) raising and extending the minimum wage, (c) resisting the attacks on trade unions, (d) stopping price rise, (e) the creation of a national social security fund, (f) increase in pensions, (g) combating corruption.

In addition, public sector advocates oppose the “downsizing, outsourcing, contractualisation, corporatisation and privatisation of government function.” They demand protection for the right to strike, regulation of the use of “casual” labor, and measures to “Keep the public utilities in public hand.”

Other rallying points of the strike include pressing the government to ratify key international labor accords and to provide social security for all workers, including the irregular laborers often subjected to exploitation, discrimination and outright slavery.

Since the start of India’s neoliberal reform push in 1991, the country has reportedly seen fourteen general strikes. Like the mass protests against the proposed expansion of Wal-Mart into India late last year, this general strike is an affront to a governing party that has tried to project an image of populism and now faces weakening growth rates.

The Indian workforce remains socially and politically stratified, and not all workers participated in the union-led strike. But for at least a little while, legions of workers aligned to put the brakes on the public and private sectors. Transit services were blockaded in some areas, and many bank employees struck to jam up the country's financial engine.

J. S. R. Prasad, director of India’s Union Development and Organising Centre (UNIDOC), an affiliate of UNI Global Union, told In These Times that the strike marked “a firm step in opposing the Government’s policies dealing with workers in India” and displayed unprecedented alliances. “For the first time the INTUC, the Trade Union Federation affiliated with ruling Congress party, also participated along with communist controlled Trade Union Federations in India,” he noted.

Still, though the general strike involved both white and blue collar workers, the country’s vast labor force is awash with unregulated, unorganized laborers relegated to the shadows of the economy, lacking even the most basic regulatory protections. As long as this cheap labor pool fuels India’s explosive “development,” all workers will spiral deeper into a capitalist freefall, accelerated by policies aimed at luring in the vultures of foreign investment.

In a recent analysis of labor issues in India, the International Trade Union Confederation reported that many of the most oppressed workers are children, who “can be found in a wide variety of industries, sometimes undertaking hazardous tasks, including in mining and quarrying, textiles, leather and garment factories, fireworks factories and many others.” In general, according to the report, “forced labour is a problem in agriculture, mining, commercial sexual exploitation, and other sectors. Overall law enforcement is poor and judicial capacities are not effective in addressing the problem.”

Yet even in mainstream sectors, the free-market development agenda is steamrolling workers’ rights. A report issued by PSI’s India Office describes how India's “new economic policy,” which embodied the free-market ideology that has shaped "development" across the Global South, has systematically eroded the economic security of government workers:

The system of outsourcing, contractualisation and casualisation of workforce started in 1993-94. During 1995 the total number of permanent central government employees was 3.98 million whereas in 2008 it came down to 3.11 million. Nearly 22% of permanent jobs were lost, which were replaced by casual workers including on jobs of permanent nature.

Though the general strike suggests that labor groups are being galvanized by shared economic struggles, Prasad said that “division among working class” is still a major impediment to organizing that “loosens their united strength and bargaining power.  This is where the government and managements take full advantage and deny their legitimate demands.”

The destruction of workers’ collective power is an old story. India’s path to modernization is trailed by long historical threads of imperialism, from the first waves of colonization to the current tides of neoliberalism and political profiteering. Yet as a response to those inequalities, the general strike reveals a common battlefront emerging for all workers, from child factory workers to bank clerks, all facing a global assault on human rights.