The Shock and Slow Bleed of Lockouts 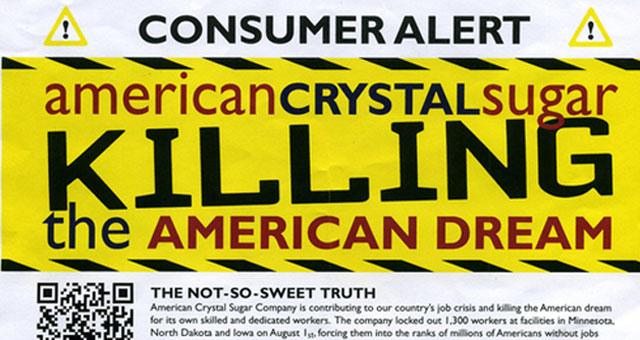 A call to arms—but can public shaming do the trick when a company can send workers home indefinitely?   (Campaign flier by BCTGM international union)

HORICON, WIS. (Feb. 23-24)—“Me, my wife, my son and my son-in-law all work at Crystal Sugar. It hurts me because you want good for your kids. My son is 23 years old. I remember the day they locked us out, my son said to me, “Why are they doing this to me Dad?” says Paul Woinarowicz, who had worked at an American Crystal Sugar (ACS) plant in North Dakota until the company locked-out him and 1,200 other workers last summer.

“My son-in-law moved to Louisiana to get another job. The one thing I think you realize is that the older you get the more you try to keep your kids as close as possible,” says Woinarowicz, trying to hold back tears as he speaks to Machinist union workers in Horicon, Wis. “They moved away with my only two grandchildren. This lockout split my family up. I am Catholic, but I hope [Crystal Sugar CEO] David Berg rots in hell."

A lockout—a work stoppage initiated by a company during contract negotiations with union workers—is the corporate union-busting equivalent of “shock and awe." As The New York Times reported, the tactic is increasingly employed by U.S. companies. It was legalized in 1957 as a result of a Supreme Court decision. There were 17 lockouts in the country last year, according to Bloomberg BNA.

Last August, Crystal Sugar, a cooperative owned by sugar beet farm owners, locked-out members of the Bakery, Confectionery, Tobacco Workers and Grain Millers International Union (BCTGM) union at five different facilities in North Dakota, Iowa, and Minnesota. As I reported last month, he move came after BCTGM rejected the company's proposed increases in healthcare costs and provisions that would allow the company to undermine the union by outsourcing work to nonunion workers.

Seven months later, the workers still can’t seem to make sense of what happened, or ensure they'll hold on to the standard of living they've had for years.

The BCTGM workers are trying to find ways to fight back against ACS. They've stayed away from more militant tactics, like shutting down factory operations—as the Longshoreman union did last year in Longview, Wash. by blocking rail tracks entering a nonunion port.

Instead, as their financial reserves decrease, ACS workers are hoping that their public-awareness campaign will put enough pressure on the company to settle the lockout; late last month I joined their "Journey for Justice," a road trip with locked-out Cooper Tire company workers that took the unionists from North Dakota to Indiana, with stops in between to build solidarity with other unions and members of the general public. I traveled with workers through Minnesota, Wisconsin and Illinois.

In most lockouts, the company has the upper hand.

“Two months before we got locked out, they sent us letters telling us how great we were in helping them to reach record profits," says ACS worker Nathan Rahm of Hillsboro, N.D. "They even gave us a special meal to commemorate it. But it was more like the last supper, because after that, they locked us out.”

Seven months ago, Crystal Sugar came to the workers with an offer they quickly refused with a 97 percent "no" vote. The proposed contract would have stripped 40 pages out of their current contract, according to Woinarocwiz. Among other things, it did away with seniority in the plant and allowed the company to outsource work to nonunion workers. Additionally, the healthcare plan deductible for a family of five would go up from $1,600 a year to $6,800. It would also give the company the freedom to raise the deductible in the middle of the contract if Crystal Sugar deemed it necessary.

After workers at five different facilities rejected the contract, the company promptly locked them out and hired replacement workers ("scabs") provided by the contractor Strom Engineering, which recently provided scabs during the Cooper Tire lockout in Findlay, Ohio. (Which is now over, as I reported last week.)

The lockout has been a harrowing experience for the workers involved—especially for those in North Dakota. The state's government has denied the 400 locked-out ACS workers there unemployment insurance, while ACS workers in Iowa and Minnesota receive it from their state governments. The North Dakota workers are subsisting on $100 a week in strike benefits from BCTGM, and donated food and clothing from other unions and charities. At one event in Minnesota, a Teamsters offical announced that the union will be driving 60,000 pounds of food up to North Dakota to feed locked-out workers.

“They have gone to great lengths to make us suffer. ... One of the biggest shareholders in Crystal Sugar is the governor of North Dakota, Jack Dalrymple. Don’t you see a conflict of interest in why we are being denied unemployment here?” says ACS worker Nathan Rahm.

Many of the locked-out workers have also been blocked from getting other jobs in the area. “You apply to other jobs at places and they tell you they don’t want to hire you because as soon as the lockout is over, they think you will go back to work at Crystal Sugar. It’s really tough for a lot of people to make ends meet,” Lee Schlichtmann says.

Locked-out workers unable to work elsewhere are finding it equally difficult to pressure the company to get their jobs back. Their main strategy is shaming the company.

On one day outside of Minneapolis, they attempted to deliver a letter to CoBank, which is an investor in ACS, asking it to pull its money out of the company because of the lockout. But workers were turned away from the bank. On another day, they raised money for their strike fund from sympathetic Minnesota labor leaders; later they crafted a strategy to deliver a letter to officals at a Nestle Quality Assurance facility in Indiana, which uses Crystal Sugar. They hope to inform Nestle of what they feel is the poor quality of sugar being made by replacement workers in the hopes that Nestle will end its ACS contract.

The BCTGM is also threatening to oppose the renewal of the federal Sugar Program. The program keeps the price of sugar high by limiting the amount of sugar that can be imported into the United States, In These Times Contributing Editor Kari Lydersen has noted.

“Our votes have always been crucial in the past. We swayed 17 representatives last time, [but] we will not go lobby this time” says Woinarowicz.  Withdrawing their support from the Sugar Program is another tactic used by locked out members to draw attention to Crystal Sugar practices in hopes that they fold under outside pressure.

All of their strategies, however, rely on building support from others against ACS and not by the workers directly affecting company operations.

In sharp contrast to BCTGM tactics, members of the ILWU blocked freight trains and broke into the Port of Longview, Wash., last year to protest the port company's push to hire nonunion workers there. More than 135 workers and their supporters were arrested in various protests and actions. The union also risked $240,000 in fines. However, the fines and the arrests appeared to pay off for the union as the won back the right for their union to be the sole representative of longshoremen at the terminal, as I reported throughout last year.

After workers (and Occupy activists) proposed preventing a ship from entering the grain terminal, Washington Governor Christina Georgie stepped in to help settle the labor dispute. The port terminal company ended up agreeing to a deal with the ILWU that was approved unanimously by union members – a rare thing in the labor movement.

“My first belief since day one, was that our union had to do things like the Longshoremen did," Rahm says. "Our union took a hard line on taking the high road and told us to just go out there and hold our signs. It wasn’t enough to make anything happen. ... "If you look at what the longshoremen did, I think things would have turned out differently from the get go if [ACS workers] had done things differently.”

Instead, the BCTGM is relying on a slow bleed public-relations strategy. Likewise, the company is pusuing on a slow breed strategy: that's what lockouts do. Out of work and drawing down their savings (and usually without generous union stipends to help them through the lockout), very often workers become desperate and broke, and agree to a contract they would have never agreed to otherwise.

But a direct challenge to ACS production remains a fantasy locked-out ACS workers think of when they are upset about their financial struggles. Of course, it’s unclear if direct, miitant action would even work to resolve the ACS dispute to workers' liking, since the situation worked in Longview mainly because the ILWU had community support and a relatively sympathetic Democratic Governor who intervened.

In North Dakota, many farmers own shares in Crystal Sugar, and Governor Dalrymple,  a major shareholder, is more likely to use the National Guard to stop any type of disruption to Crystal Sugar’s production as opposed to stepping into meditate the situation as Georgie did.

So the traumatized workers limit continue to speak out in public and hold signs. It’s a grim reality faced by more and more locked-out workers, as companies drive a very hard bargain: Accept our terms, or lose your jobs.