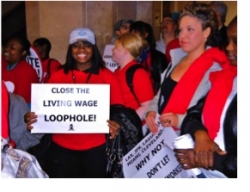 Chicagoans rally in support of the "Stable Jobs, Stable Airports" ordinance, which would introduce a living wage for airline workers.   (Image courtesy Inside Chicago Airports)

CHICAGO—Even more than frustrated airline passengers who find the skies increasingly unfriendly, airline and airport workers—who only walk the airport terminals' long corridors—are discovering that the air travel business is growing less and less congenial for them. In reaction, workers at Chicago's O'Hare and Midway airports—the nation's second and twenty-seventh busiest—are trying to defend and improve the quality of their worklives by forming unions and pushing for more supportive public policy.

Local 1 of UNITE HERE, the hotel and restaurant union, has been successfully organizing workers in the retail concessions of both airports off and on for many years and, thanks to a new surge, now represents about 1,300 of the 2,300 concession workers at both airports. But the turnover of retail concession contracts mandated by Chicago Mayor Rahm Emanuel could threaten the jobs or income of 1,500 of the concession employees in coming months.

Meanwhile, the Service Employees Union's own Local 1 is organizing a wide range of passenger services workers—the people who push wheelchairs, drive shuttles, clean airplane cabins and do other essential but low-skill tasks.

A new study reveals just how bad their working conditions are: Over one-third, for example, don't make the Illinois minimum wage, partly because they rely on tips—which many passengers don't realize, and by federal law the personal service assistants can't say anything to encourage tipping.

At the same time, even though employers break the law by refusing to bring the combined wage and tips up to the minimum, they report the workers' income as if they made the minimum, thus taking out a bigger chunk for taxes than warranted by the real income. UNITE HERE promotes legislation—nominally supported by 31 of the city's 50 aldermen, but indirectly opposed and delayed by Mayor Emanuel's administration and his hardestcore loyalists in the council—that would help both sets of workers.

The "Stable Jobs, Stable Airports" ordinance would guarantee workers their jobs during a change in concessionaire contracts, require employers to maintain labor peace (not only helping maximize city revenues and increasing convenience for travellers but also restraining anti-union actions), and close an anomalous loophole in the existing living-wage law that exempts airport contractors. Similar rules govern several other major airports, such as those in New York, San Francisco and Los Angeles.

"It's not like this is a real burden for Chicago to do because other cities have done it successfully," says UNITE HERE organizer Jim Baker.

The law would immediately boost pay for about two-thirds of the workers to $11.18 an hour (providing on average a pay hike of about 22 percent or $4,000 a year, according to a study by a group of researchers from the University of Chicago and elsewhere). Chicago's economy would benefit from $3 million to $8 million in new purchasing power. And the cost would be borne by a small reduction in the super-profits of airport sites, a slight increase in passenger costs, and savings in training costs with a more stable workforce.

The provisions for labor peace and transitional job protection would also help workers like Margaret Shields, a 38-year old mother of two boys in high school, who worked 12 years in retail shops at O'Hare's international terminal building. When the city's newly hired management firm subcontracted with The Hudson Group, a Swiss-owned airport retailer to run the store where she worked, Shields was the first of 12 workers (out of 21 total employees) who were fired.

Although a member of UNITE HERE, the contract at her store and union recognition had not been re-affirmed. The fired workers were disproportionately more experienced and higher-paid, says Baker. Shields had never been disciplined or criticized for her performance over her dozen years. But she was also a union stalwart. On Monday, January 11, after she had already prepared to leave at the end of her shift, Shields says, she refused to do work her supervisor told her to do, and she was charged with insubordination the next day. That was also the time a leaflet became public about a meeting with management on worker grievances, and Shields' name was on it. The next day, at the end or her shift, she was fired.

Baker worries about what will happen as more new concession contracts are signed. "There are gains [from the new union presence], while limited, which could be eroded," he says. But he also worries about the way in which the Stable Jobs, Stable Airports proposal has been buried in the committee of a council floor leader for the mayor. "I would think when an ordinance is introduced, it would get a hearing and vote," he says.

The personal service workers, whom SEIU Local 1 is organizing in both Chicago and Houston, would gain from the legislation. But workers in both groups need unions and better across-the-board labor law enforcement. Most work for a few contractors who are hired by the airlines, and over half are foreign-born, either from eastern Europe or Latin America.

Beyond finding how many workers report not even receiving the minimum wage, the new study by University of Illinois Labor Education Program researchers reports that employers

The personal service workers typically have no sick days or vacation and rely on public assistance programs to make minimal ends meet. Now Shields thinks many other airport workers like her are ready to work to change these conditions.

"You've got to put hope in the good fight," she says. "I believe they expect us to give up. But we've got to keep it up for the next set of people, so they won't have to go through this."