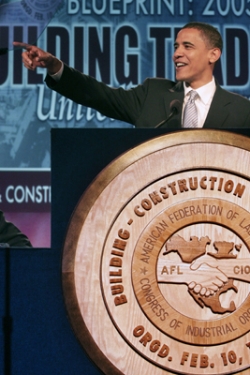 President Barack Obama addresses the Building and Construction Trades Department AFL-CIO Legislative Conference in April 2005 in Washington, DC when he was an Illinois senator.   (Photo by Chip Somodevilla/Getty Images)

ORLANDO, FLA.—In a case of news that carried significance but no surprise, on Tuesday the AFL-CIO's general board unanimously endorsed the re-election of President Barack Obama at their meeting. After delivering their endorsement, union leaders then chatted by telephone with the president "about the need to build an economy that works for everybody," AFL-CIO president Richard Trumka said.

Despite some leaders' earlier misgivings about Obama's performance, "we've never doubted his concern for working people," Trumka said. Equally, if not more important, the labor movement—including unions like the Firefighters, about half of whose members traditionally identify as Republican—sees the increasingly right-wing, plutocratic and anti-union Republicans as a dire threat to working people and blames Republican intransigence for limiting Obama's accomplishments.

Trumka also applauded Obama for shifting from a focus on deficits last summer to a focus on "jobs, jobs, jobs" since Labor Day. "He's put out bold initiatives to bring people back to work, brought revenues back into our economy, and has a vision for this country that stresses opportunity and fairness," said political committee chair and AFSCME (public workers) president Gerald McEntee, an ardent Hillary Clinton supporter in 2008. "We think he's a good man."

But if the endorsement was anticipated—anything else would have been real news—labor's own plans for political work may turn into the more substantial political news.

Partly the changed plans to greatly intensify its own direct contact with workers and to build year-round political mobilization springs from longstanding frustration with holding Democrats accountable to support pro-worker policies in a time when, as McEntee said, there's "no question American labor has a target on its back." But the change also reflects the new influx of unregulated cash from corporations and rich individuals, such as the 35 Republican benefactors giving a million or more dollars who so far account for 40 percent of Super PAC spending.

With the flood of money into Super-PACs, "everything has changed," says AFL-CIO political director Michael Podhorzer. "The AFL-CIO, the labor movement have changed." Although unions may spend a lot of money on politics—the best estimate for the 2008 election cycle is $400 million, unions recognize that even more than in recent decades when business interests outspent them by more than ten to one, they can't compete in giving to campaigns or Super PACs with Republican billionaires.

The union edge comes from direct conversations with fellow union members and workers. A personal talk with someone who can be trusted can most effectively counter the preditable barrage of negative ads, Podhorzer said.

"Now more than ever the labor movement has to be about creating conversations among workers," Podhorzer said, "quality" conversations that go beyond checking for support or reading a script. The Labor 2012 campaign hopes to recruit 400,000 activists to carry on those conversations at the workplace, door-to-door, and on the telephone.

This is part of building the year-round labor apparatus, which will be developed most intensively in six states—Michigan, Ohio, Wisconsin, Florida, Nevada and Pennsylvania—and to a lesser degree this election in nearly 20 others.

The shift entails a change in spending. Two-thirds of labor political money went to candidates and party organizations in 2010. Already last year that share dropped by 20 percent, Podohorzer said. Now, he said, labor "is investing funds in long-term capacity," giving less to candidates to use as they please.

The new capacity will be used to reach non-union workers as well as union members, expanding labor's influence and increasing the efficiency of neighborhood canvassing. Already the 3 million member Working America has demonstrated the political and broader organizational potential of reaching out to workers without a union at work. Money for this new outreach will be channeled through labor's own new Super-PACs.

Unions will also control the message. Asked what Obama should be saying, Trumka replied, "Keep talking about jobs. keep talking about all the ways he's going to create jobs. keep fighting against the failed policies of the past. Talk to the middle class, to give them hope. Talk about inequality, about manufaccturing....Keep talking about enforcing our trade laws."

Teachers union president Randi Weingarten said she sees the election as a choice of two Americas, one where "you're on your own,' the other a democratic country where we're all in it together. Unions will work to keep up a sharp contrast between Obama and the Republican nominee. "The challenge for us is making sure through messages and conversations that this election is a choice and not a referendum," Podhorzer said.

"To the extent the Republicans talk about the economy, they want to make it a referendum on Obama. That's flawed. It's a choice: Do you want this disastrous economy to be dealt with by Barack Obama's policies or Mitt Romney's policies?"

Confronted with that choice, voters for now at least are very narrowly picking Obama. Labor's grand conversation may strengthen that margin, particularly in some groups--like the white working class, where support has fallen off sharply since 2008. But labor can help the Obama campaign on many other fronts—registration, voter protection, mobilization of people of color, if union members share—or better, exceed—the enthusiasm of the endorsement their leaders showed on Tuesday.