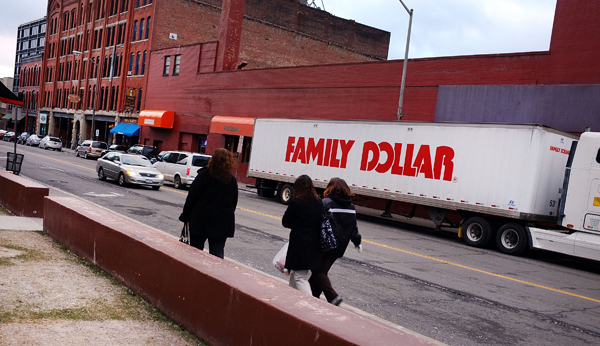 One official measure of poverty around the world is surviving on $2 per day or less. It’s a condition many Americans could barely imagine living in. And yet the official data suggests that while politicians insist the U.S. is insulated from such deprivation, a large share of the country is feeling a cold draft from the “Third World.”

A set of new analyses from the Center on Budget and Policy Priorities (CBPP), drawing from a study of income data by the University of Michigan's National Poverty Center, shows that for well over a million households, many of them with children, are besieged by hardship of an epic magnitude:

The World Bank's $2-per-day metric derives from a perennial cliché in humanitarian circles, generally used to describe poor countries in the Global South. But while some question the usefulness of such simplistic measures, the phrase has a unique application in a country that’s historically represented the top of the human development scale. And one reason why the U.S. has so many people stuck at the bottom is because in many communities, this inequality is practically written into the law, with public assistance programs virtually enforcing the extreme poverty line.

Since bipartisan welfare “reform” under the Clinton administration, which precipitated the gutting of programs and erosion of benefit levels over time, the poorest households have become mired in outmoded welfare systems that don’t correspond to real social needs:

It's basic math: Add the recent recession to years of wealth-hoarding by the richest Americans, factor in endemic socioeconomic, racial and gender inequality, and you get polarization that's global in scale and intensity. This is reflected in each individual whose daily standard of living is worth the cost of a Wall Street financier’s morning coffee.

Although the stimulus package enacted by the Obama administration gave a temporary boost to welfare programs, those dollars have dried up. The safety net is further unraveled, according to the CBPP, by a block-grant funding system in which the benefit “does not increase in response to increased need.” Meanwhile, recently proposed budget cuts to federal housing assistance (from both the White House and Congress) would raise the cost of rent for hundreds of thousands of struggling families. In other words, the “ownership society” is effectively disowning its neediest members.

Extreme poverty is acutely painful for already vulnerable demographics. The largest jump in $2-a-day poverty—a stunning three-fold increase since 1996—hit female-headed households. Children in poverty, who face long-term barriers to education and healthcare, and are disproportionately black and Latino (but including many whites as well), tend to carry these hardships into adulthood.

According to CBPP researcher Arloc Sherman, these trends affirm other research suggesting that “it has become harder to access welfare.” Since the reforms of the 1990s, which instituted onerous work requirements and other restrictions, the percentage of very poor families covered by Temporary Assistance for Needy Families (TANF) has tumbled.

On the other hand, what’s left of the safety net continues to play a critical role in preventing total devastation for many.  “I suspect for those who lost jobs in the recession, Unemployment Insurance—thanks in part to [The Recovery Act]—played a big role in keeping people's cash incomes above $2 per person per day,” Sherman told In These Times.

While the presidential hopefuls race to outdo each other in gratuitously denigrating the poor (along with people of color, single women and other time-honored scapegoats), it’s important to keep in mind that these populations don’t fit the standard caricatures of welfare queens and freeloaders.

The CBPP’s research also reveals that the population that uses public assistance--those conservatives demonizeas the “entitlement society”--primarily consists of old folks, people with disabilities--oh, and people with jobs. In fact, “People who are neither elderly nor disabled — and do not live in a working household — received only 9 percent of the benefits.” So in a labor market offering about one slot for every four job-seekers, a good chunk of those  “entitlements” go to the very same “hardworking Americans” that right-wing rhetoric contrasts with the supposedly undeserving poor.

The right pushes a delusional narrative of a country divided between “makers and takers”—the productive go-getters versus the welfare-hungry sloths.  But when you crunch the numbers, it becomes all too clear who the real takers are: the ones who make it harder for everyone else to make a living.